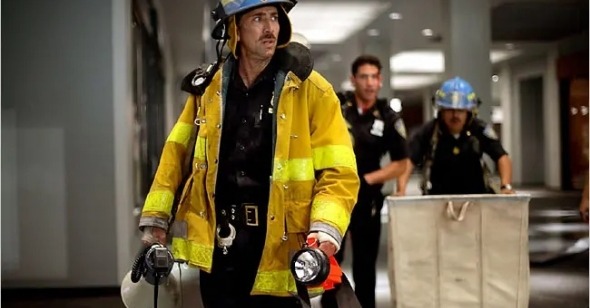 World Trade Center is negligible, yet the media reaction to it is unforgivable. Oliver Stone has always served as a whipping boy for the mainstream press‚Äî‚Äúoutlandish conspiracy theories!‚Äù is still muffed about whenever his name pops up, as if he had exclusive rights to JFK‚Äôs not-very-outlandish-at-all suppositions‚Äîmuch in the same way that mentions of Spike Lee or Michael Moore are met with casual eye rolls. That Stone couples his politics with grandiose spectacles and large budgets and serves up his deeply personal musings on cinematic silver platters, has always troubled those who prefer their studio and indie offerings with strict demarcations. Studio-backed politicking comes across like pompous moneyed showboating, whereas low-budget proselytizing in some specialty theater stays as safely distanced as the neighborhood weird-beard passing out Jews for Jesus leaflets. Oliver Stone has always managed to seem a bit of both. It‚Äôs the softness and the oft-stated ‚Äúapolitical‚Äù nature of his latest film that has media outlets suddenly fawning over him; in an attempt to level the playing field in his depiction of an event that reflected a nationwide, nonpartisan pain, he has perhaps inadvertently created a film that plays directly into the hands of the current hegemony. Who knows if Bush would truly love World Trade Center; but surely he wouldn‚Äôt have any qualms.

Until U-Turn raised an eyebrow or two, and then Any Given Sunday stopped him dead in his tracks (Alexander was just a means to continue flogging this horse‚Äôs corpse), Stone‚Äôs Nineties career was spotted with an exhilarating mix of wayward earnestness and focused gravitas. JFK was more thrillingly structured and composed‚Äîand far less ‚Äúnutball‚Äù‚Äîthan anyone could have hoped for: in years hence, it seems ever more daring and fleet. And forget the ‚Äúmoral indictment‚Äù of Natural Born Killers and coast on its bellicose, instinctual filmmaking, a nonstop see-what-sticks riff on media exploitation that might just be a parody of riffs on media exploitation (the Rodney Dangerfield ‚ÄúI Love Mallory‚Äù interlude remains one of the most terrifying one-off musings I‚Äôve ever seen). Nixon, with its ludicrously elevated biopic form (Shakespeare, Oedipus, and Charles Foster Kane? Holy Toledo!) still stands as one of the most grave and dazzling spectacles of its decade, a testament to its filmmaker‚Äôs own outsized ambitions (and God love him for that) as well as its subject‚Äôs firm, unceasing grasp on the conscience of his era. Love them or hate them, there was simply nothing easy about these films: no built-in audience, no cushions to fall back on; in interviews Stone would be recalcitrant and unrepentant, sure that Hollywood needed him as much as he needed it, that he had demons to spew, generations and cultural moments to herald and condemn, and fuck anyone who denied it.

Of course, there‚Äôs always been more than a touch of childish grandstanding in Stone‚Äôs work, as well as that need for approval so endemic to American filmmakers who have tasted a great deal of success and crave even more, while wrestling with their own artistry (Spielberg and latter-day Scorsese fall squarely into this camp). The result can be compromise, but never have I seen anything as blatantly self-abnegating as Stone‚Äôs World Trade Center. ‚ÄúIt‚Äôs not political!‚Äù Stone and his mustachioed leading man Nicolas Cage pleaded in a recent junket TV interview. Then what is it? Well, judging from the meticulous narrative at work, it‚Äôs an attempt to recreate the national mindset of 9/11, and then try to literally extricate some form of redemption from the rubble. It‚Äôs a universal tale told through the eyes of a few; one of our country‚Äôs greatest tragedies readjusted and confirmed as the story of survival and heroism. Yet, to thrust viewers back into that September 11th mindset is an act of almost infantile regression; how we felt that day was blindsided, struck dumb, coddled. The film‚Äôs agenda is therefore to bring us back to that moment when we were all united in grief, as well as anger and, more tellingly, confoundedness. Keep the American public in a constant state of fear, anxiety, and embedded in a constant stream of American human-interest narratives, and they‚Äôll remain ignorant of the event‚Äôs political implications‚Äîit‚Äôs a pretty accurate approximation of the Bush administration‚Äôs continued belief system and propaganda machine.

So without any sort of social reappraisal of such a history-changing event, what do we have? Or better yet, what are we left with? Well, first of all, there‚Äôs the reliably straightforward, and, to some, reassuringly sentimental, TV-movie-ish trajectory following the aborted rescue mission and near entombment of real-life members of New York‚Äôs finest, John McLoughlin (Nicolas Cage) and Will Jimeno (Michael Pena). Paralleling this are the nicely performed wife-in-waiting narratives with a cobalt-blue eyed Maria Bello convincingly knocking off a Noo Yawk accent as Donna McLoughlin and Maggie Gyllenhaal ratcheting up the tension as Allison Jimeno. With these twin tales, the film might have been a perfectly innocuous microcosm of national grief (in one of the film‚Äôs best scenes, Gyllenhaal makes an attempt at casual CVS shopping while still not having heard news of her missing husband‚Äôs condition, only to spiral out into palpable frustration and anxiety), yet Stone‚Äôs continual interjections of middle-American anger and in-the-moment bluster sink the ship. The mini-narrative of Dave Karnes (Michael Shannon, in a performance so wooden, ethereal, and divorced from the rest of the film, it seems likely to have been shot by a second-unit director), the business-man who immediately quits his day job, goes to church (the cross is seen in gigantic close-up onscreen), shaves his head, and dons full marine regalia before discovering and rescuing John and Will from the rubble, seems designed only to provide Stone with a thoroughly counterintuitive move. ‚ÄúIt‚Äôs going to take a lot of good men to avenge this,‚Äù he says; there‚Äôs no hint of irony here, even when at the close of the film a title card announces that this nearly anonymous hero served two tours of duty in Iraq. It‚Äôs a conclusion that plays right into the misconceived, if highly successful, ideological connection between 9/11 and the current Iraq debacle. The possibility that Stone believes in just such a connection is less likely than his reinstatement of a Colin Farrell-Jared Leto lip lock in Alexander. Therefore, for all his desperate stabs at earnestness, he ultimately couldn‚Äôt seem more disingenuous. In the layman‚Äôs vocabulary Stone so desperately wants to channel, it‚Äôs pure bullshit.

Even if Stone‚Äôs bludgeoning films had never been your cup of bromine, a film like World Trade Center undoubtedly makes you appreciate what‚Äôs been lost with this director. (Imagine Michael Moore directing an episode of CSI and you‚Äôll know what I mean.) It‚Äôs not exactly warm and fuzzy, but one thing World Trade Center is is exceedingly safe; coming after his recent spate of box-office dust bunnies and critical losers, it‚Äôs a sure-fire, cynical way to regain the respect of the filmic community. Who is going to complain about a film regaling the policemen, firefighters, and emergency workers who bravely sacrificed their lives that day? Save some expectedly tasteful aesthetic choices (not showing the planes striking the building; leaving much of the carnage discreetly off-screen), it‚Äôs a completely hollow spectacle and serviceable suspense narrative‚Äîreplace Stone‚Äôs name in the credits with Ron Howard and see if anyone could tell the difference.

An easy film for difficult times, World Trade Center is as clobbered and nearly speechless as we were that morning; it‚Äôs almost a piece of nostalgia. Mere days after 9/11, the Village Voice unleashed its dumbstruck cover story: over a picture of the plane crashing into one of the towers were the large capped words ‚ÄúTHE BASTARDS!‚Äù Such monosyllabic instant reactions were negotiable then. In World Trade Center, Stone abruptly cuts to a Sheboygan diner to observe a rotund man unrelated to the narrative proper. ‚ÄúThe bastards!‚Äù he exclaims, never to speak again until the final frames of the film, when he is seen at Ground Zero handing out bratwurst. Five years later, one couldn‚Äôt be blamed for expecting something a little more articulate.