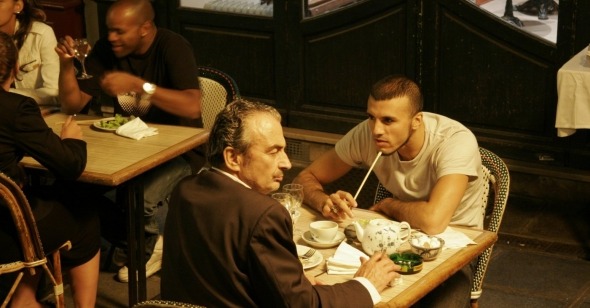 The catchwords for Before I Forget would seem to be direct, intimate, unsparing; yet, conversely, it also feels cavernous and, in its seeming brutal frankness, slippery and elusive. Either drenched in unyielding shadow or flooded with harsh light, Before I Forget follows the fifty-something Pierre (played by writer-director Jacques Nolot), a former hustler, HIV-positive for 24 years, living alone in a spacious Parisian apartment, who’s unmoored after the death of his elder benefactor. The premise is simple, intensely character-driven, and the structure linear and compartmentalized—we see Pierre’s daily activities, which involve, in no discernible order, meeting with fellow gay former gigolo friends of the same age, having comparatively impersonal trysts with hustlers of a much younger age, visiting his psychiatrist, and generally putting around his flat—but the result is enormously complex, a surveying of an entire life just past its midpoint via its practicalities and lost promises.

What makes Before I Forget especially compelling is that Nolot’s character is genuinely articulate, even something of a base philosophizer; perhaps a lesser filmmaker would have let the silences speak for its central character, but Pierre, presumably often taking on the voice of the film’s maker, expounds on what we see on screen with a fascinating mix of pragmatism and nihilism. He’s a man who, like the actor-director himself, seems to conceal nothing, visually typified by his willingness to expose his sagging middle-aged flesh for the camera under the glare of luminescent kitchen lights, but whose self-consciously prim posturing and proclivity to bare his soul to anyone who wants to listen (disengaged prostitute studs, friends increasingly tired of his ramblings) probably masks even deeper reservoirs of anguished loneliness than he’s ready to excavate. Pierre’s elegant suits, which ingeniously slim and disguise the paunch and droop of unattended muscle, are then his cloaks, his shields of propriety, much like his slicked hair or the moustache one of his paid boys wants him to shave off so that he can dress in drag for a club in Pigalle. Pierre, though, like any of us, is unwilling to shed these firmly entrenched identity marks.

If Pierre sees a certain beauty in the vile and decrepit (“Pasolini must have been terrified. Shit, it was a beautiful death,” he says unironically), then at least Nolot tempers it with his visual practicality and artless artfulness. The opening image of the film, of a black dot on white, gradually enlarging until it becomes a black hole engorging the screen, sends us into the abyss, while his final, gorgeous image, of a figure walking into a shadowy nothing, furthers this descent. Like the film’s first and only true sex scene, darkly, unforgivingly lit, Before I Forget seems to exist at an eternal 4:30 a.m., the time when we first see Pierre, suffering from insomnia, making his fateful, repeated trip from kitchen to desk and back again. Nolot’s camera is always matter-of-fact in its placement; it’s obvious that despair engenders his aesthetics and not vice versa.

There’s a hushed resignation to the filming that naturally flows from the character, who is essentially a bourgeois artifact railing against the bourgeois. Surrounded by books and letters and unfinished notes, resentful of money now that he doesn’t have unfettered access to it, Pierre at times seems like a cast-off from Fassbinder’s Fox and His Friends, and indeed Before I Forget is similarly concerned with bodies (specifically those of gay men past their prime) as commodities, and what to do with them when the capital and blood have stopped flowing regularly. Eternally waiting on an inheritance that he knows may never come, from an ex-lover he loved who may not have loved him back equally, Pierre is alone in the dark, reaching out for anyone who might provide momentary company, but, like Nolot, he’s a brave enough soul to wander his path alone.