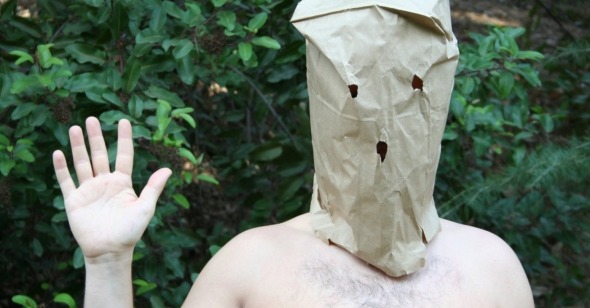 A refreshingly high-concept low-budget outing, the Duplass Brothers‚Äô Baghead is an immensely likeable and surprisingly well-executed genre hybrid. The difficulty one finds in trying to categorize it is part of its charm, and this is not just whether one sees it as horror, comedy, or relationship roundelay but also how one defines and compartmentalizes its aesthetic: Baghead‚Äôs makers and at least one of its stars may have crawled out from under the ‚Äúmumble‚ÄĚ-corps, but its adherence to a somewhat conventional narrative framework successfully contorts and expands the boundaries of what that short-lived almost-collective of filmmakers were after. And furthermore, and of greater significance, it smartly proves that it only takes the slightest, smartest tweaks to temporarily revitalize an entire genre.

After an inauspicious opening set at the Los Angeles Underground Film Festival that means to skewer the Duplasses‚Äô indie film brethren with a somewhat lame and vaguely targeted film parody called We Are Naked (we‚Äôre more in the vicinity of Christopher Guest‚Äôs The Big Picture here than anything truly cutting or up-to-date), Baghead quickly gains momentum and confidence. Soon enough, the film‚Äôs appealing cast of out-of-work L.A. actors (played generally by same), sick of being extras, decide to escape to a friend‚Äôs remote cabin in the woods to hash out a screenplay over the course of a weekend, in which they will give each of themselves a plum part. Naturally, there‚Äôs an extreme case of sexual tension among the players‚ÄĒRoss Partridge‚Äôs Matt, the de facto team leader due to his athleticism and handsomeness; mumblecore poster girl Greta Gerwig‚Äôs unwitting bombshell Michelle, who‚Äôs much sought after by Steve Zissis‚Äôs portly, self-loathing Chad; and finally Elise Muller‚Äôs awkwardly shoehorned Catherine, an aging wannabe ingenue with a youthful overbite‚ÄĒall of which the Duplasses play out with well-timed doses of sincerity and satire. As the group gradually, and with a notable lack of enthusiasm, comes up with tenuous ideas for the screenplay, the film itself follows, in an unforced meta fashion. Just as the characters aren‚Äôt sure what kind of film they want to make (‚ÄúI want love to happen,‚ÄĚ says Chad, while Michelle gets inspiration from an unsettling stalker dream that gives the film its title), Baghead itself parallels this genre indecision, jumping from genuinely scary to reassuringly jocular in the wink of an eye‚ÄĒthough, miraculously, that wink is never turned to the audience.

If all the self-reflexivity sounds convoluted, or worse, self-congratulatory, the experience of watching the film couldn‚Äôt be further from it. The Duplass brothers obviously encourage a certain looseness and improvisational behavior on set, but they‚Äôre also judicious editors, knowing exactly where to cut within scenes, and rather than let their camera capture the mere detritus of their characters‚Äô behavior (see Mutual Appreciation or Kissing on the Mouth) they always smartly zoom in (often literally) on telling moments of interaction. As Baghead segues from embarrassing comedy of manners to possible slasher flick, the Duplasses rarely miss a beat, with the exception of a late-film montage of the group on a survival trek through the woods ‚ÄĒset to vague guitar-noodling, the scene is a squandered chance to further capture these people at their most desperate through dialogue. Otherwise, though, Baghead is sharply attuned to their neuroses, and the plot pivots brilliantly on the springboard combustibility of their attraction to or distrust of one another. As a horror film, it may not have the rigorous formalism of its obvious antecedent The Blair Witch Project, but it‚Äôs at times more convincingly grounded in heedless human behavior. And thankfully, none of the film‚Äôs four hopeful auteurs feel the need to watch their plight through the mediation of a video viewfinder (Romero‚Äôs Diary of the Dead put the nail in that coffin).

Of course, all of the Duplasses‚Äô focus would be worth little if their cast didn‚Äôt earn the attention lavished on them. Partridge and Muller are particularly good, both appealingly showing their early forties (he resembles a winsome, almost over-the-hill ballplayer, while she gives off a poignant, wasted 80s supermodel vibe), and though Zissis perhaps overweeningly inhabits the mewling Chad, the Duplasses know exactly what to do with him, using his overgrown baby unbalance to set the film just off its axis. The filmmakers are so savvy in their casting that they even manage to utilize Gerwig‚Äôs narcotized, mumble-honed performance style to their advantage; where once her vaguely retarded monosyllabicity was valorized as DIY mannerism, here she‚Äôs made nearly grotesque in her flirtatiousness. This is best shown off when the mumble-girl fixation on infantilizing men by playing with their hair (see Mutual Appreciation, Quiet City) finds what could only be its endpoint when Michelle rebuffs Chad‚Äôs advances, only to subsequently fill his matted, receding curly-top with tiny, plastic hairclips. It‚Äôs a queasy image that feels all of a whole with the rest of the film‚Äôs nightmarish comedy of bad manners.