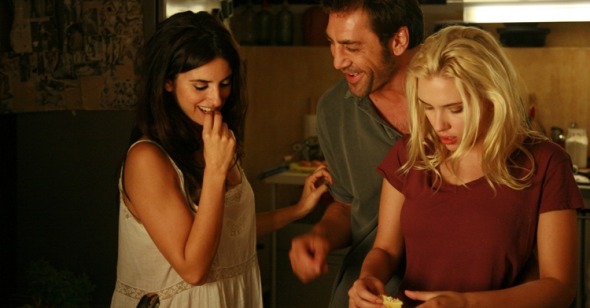 Each review of a new, annual Woody Allen film needn‚Äôt require an overarching, state-of-his-art introduction, but it‚Äôs hard to fight the urge to do so. The fact that, even at this late stage in his career, America‚Äôs most prolific just-off-mainstream filmmaker instigates such charged responses from so many viewers‚Äîwhether a bemused, wistful smile or a fly-swatting ‚Äúfeh‚Äù‚Äîgoes a long way in proving that there‚Äôs still vitality here, even if it often exists in the debates around his work more than in the worlds of the films themselves. Antiquated though Allen‚Äôs brand of verbose, narcissistic city-dwellers may now be (even at wishfully young ages in such films as Anything Else, Melinda and Melinda, and now Vicky Cristina Barcelona), there will always be a core of truth to their self-aware bourgeois bitterness.

The director almost pathologically ‚Äúwrites about what he knows,‚Äù even when he shifts to social-climbing murders set against fine European linens (he certainly ‚Äúknows‚Äù Chabrol) or, in his new film, romances with fiery foreigners in sun-dappled Spanish settings (Woody certainly ‚Äúknows‚Äù expensive vacations), but Allen also knows himself‚Äîhis limitations, his passions, the self-made boundaries of his own hermetic Manhattan-of-the-Mind. Whether this knowledge precludes or enhances our emotional involvement with his characters depends on our own cultural and emotional baggage; whether Allen successfully pulls one out this year or the next seems contingent on how much of his heart he put into any given film‚Äôs construction.

And maybe it was the Gaudi architecture or the restorative Mediterranean breeze, but on a very basic level, Vicky Cristina Barcelona works, flowing along even and steady, and infectiously fascinated by its principals (and its principles, as any Allen film worth its weight in moral dilemmas must be). The central love affair, between unmoored post-collegiate Cristina (played by Allen‚Äôs daughter-muse Scarlett Johansson‚Äîget over it, it‚Äôs not that creepy) and mysterious painter Juan Antonio (Javier Bardem), needs to be equal parts foreboding and frivolous, without tipping too far into either, and Allen is up to the challenge. He even complicates matters with several effective monkey wrenches: Rebecca Hall‚Äôs Vicky, for instance, Cristina‚Äôs friend and tour buddy, whose pursuit of a master‚Äôs degree in ‚ÄúCatalan identity‚Äù has brought them here in the first place, and whose initial repelling of Juan Antonio‚Äôs double-the-pleasure come on to the girls (‚ÄúCome with me to Oviedo. We will leave in one hour.‚Äù) gives the film its pragmatic grounding and Cristina all the fuel she needs to initiate a rendezvous. Vicky‚Äôs growing attraction to Juan Antonio is further confounded by a visit from her tucked-shirt-and-khakis fianc√©, Doug (Chris Messina, bursting with toothy self-satisfaction, and just one grin shy of a Starbucks stereotype), and the sudden return of Juan Antonio‚Äôs legendarily feisty and possibly insane ex, Maria Elena (Penelope Cruz), who throws Cristina‚Äôs comparably muted affair into sharp relief. Allen manages to keep all these balls in the air with aplomb; despite his characters‚Äô tendency to turn their neuroses into glib self-narration (‚ÄúI happen to be very moody,‚Äù promises Cristina), the film doesn‚Äôt feel forced or overly tied into a central thesis, unlike his more aggressively conceived recent rom-coms, like Melinda and Melinda.

Allen‚Äôs seemingly unavoidable need to narratively underline extends to his choice of overlaying Vicky Cristina Barcelona with an omniscient male voice-over, which lends the film the emotional clarity of short fiction but also a nattering, collegiate stuntedness. It‚Äôs understandable that critics would harp on this decision, as it‚Äôs a fairly bald-faced ploy for some sort of distanced academicism that the film doesn‚Äôt necessarily earn or require, but it‚Äôs a shame that this example of Allen‚Äôs rehearsed fussiness (he‚Äôs done this sort of narration before, most successfully in the more coherently clinical dissection Husbands and Wives) distracts many from those moments where Allen actually is trying something different. Working with a new cinematographer, Javier Aguirresarobe (‚ÄúTalk to Her‚Äù), Allen appears to have been slightly freed from his detached, often dispassionate, fixed-shot style, making space for a more playfully roving camera, some nice uncharacteristic slow zooms, and a bevy of brightly lit close-ups, which in one lovely case cross-dissolve into one another. Of course, Allen‚Äôs penchant for shooting single takes without significant coverage rears its head, for better (a terrific shot, set amidst a field of yellow flowers, following Cristina as she retrieves aspirin for Juan Antonio only to return and find Maria Elena applying a more forceful headache remedy) and for worse (a hotel room seduction with Bardem and Johansson plagued by bad sound recording).

Vicky Cristina Barcelona, with its entranced shots of the titular city and Oviedo, seems all too happy to be accused of tourism; like last year‚Äôs similarly myopic but emotionally acute The Darjeeling Limited, it‚Äôs a tourist film about tourists, and therefore content to not fully comprehend its exotic locales (unlike, say, Match Point, which presumed a strong inner knowledge of British class structures). And there‚Äôs no doubt that Allen‚Äôs portraits of Juan Antonio and Maria Elena could easily be identified as mere tempestuous types: crazy, sexy, polysexual tortured artists, painted in strokes as broadly as those on their vibrant, abstract canvases. Yet Allen smartly cedes the floor to Bardem and Cruz, who seem to be relishing the freedom to engage in such juicy, freeform repartee; Johansson‚Äôs cherubic, little-lost-girl beauty and Hall‚Äôs attractive practicality get formidable spotlights, but this is the Spanish actors‚Äô showcase. Sure, Bardem ‚Äúsmolders,‚Äù but in dulcet tones that best exemplify his gifts for listening and reacting: he‚Äôs strapping and self-effacing at once. Meanwhile, Cruz leaves all delicacy behind, reveling in Maria Elena‚Äôs unbalance: she‚Äôs terrific to watch, and, Spanish though she may be, proves that portrayals of chronic dissatisfaction and self-immolating neuroses are not the provenance of Upper East Siders after all.