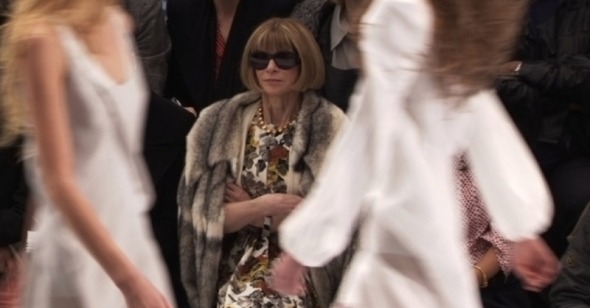 About five minutes into R.J. Cutler’s The September Issue, an almost-exposé of the production of Vogue’s annual fall spectacular, electroclash act Ladytron’s icy “Destroy Everything You Touch” spikes on the soundtrack. By this point Cutler’s already established his hands-off nonfiction filmmaking bona fides, run through a couple of other music cues and highlighted the film’s main attraction: a first-person interview with the famously aloof Vogue editor Anna Wintour, definer of fashion, inspiration for the princess of darkness in The Devil Wears Prada. With the Ladytron cut, he reaches out for some kind of documentary/fashion nirvana: the band’s chilly posing and preening seems a dead-on match for images of Wintour twirling on a series of red carpets; its propulsive beat makes the whole thing feel more like something straight from the multiplex. Yet Ladytron’s lyrics, while not exactly plumbing James-ian psychological depths, are really about self-sabotage and preservation, and neither of these things are really what The September Issue’s about, at least as far as I can tell. Ice queen or no, Wintour does not destroy everything she touches, just the opposite in fact, and this thoughtless dissonance so early on sets the tone.

Need it be said that The September Issue would likely not exist if not for The Devil Wears Prada? The 2006 movie gave Meryl Streep the chance to devour scenery and ingenues alike in pursuit of an idiosyncratic take (some might say caricature) on the Wintour mystique. Instead of making a documentary about the woman herself (a project that likely would have been well-censored by its subject), Cutler (producer of The War Room and co-director of A Perfect Candidate) was invited to document the execution of the mammoth tome eagerly awaited by fashionistas at each summer’s end. Choosing an uncluttered verité format (interspersed with a handful of first-person interviews), Cutler seems to place much of his movie in the hands of veteran cameraman Bob Richman (who was awarded Sundance’s cinematography prize for his work), and he’s generally well served by the collected footage. Richman’s shot enough documentary to know how to frame a subject, get us in and out of a scene, and hang back so as not to crowd the subjects and ruin the mood— thankfully The September Issue isn’t bush league shaky-cam territory.

What’s missing is authorial intervention. Cutler’s been involved in two of the greatest campaign movies of all time, and the skillful frisson of their editing choices suggested a point of view on the proceedings. The September Issue’s cutting is fast and slick, and moves us forward, but in so many directions at once that it’s hard to get a sense of individual stories and the minor conflicts that arise in the assembling of the magazine. Buoyed by an indie-friendly soundtrack (also featuring choice selections from Of Montreal, LCD Soundsystem, Ratatat, and other bands of the moment), it compensates for its lack of heft with plenty of thrust. There’s little examination of where the world of fashion fits into our contemporary experience except for minor asides detailing Wintour’s influence over what we buy, and little outside perspective on what the September Issue actually means (marketing exec notes at one point that the book will likely land in the hands of 13 million Americans, but what do the other 300 million think of it all?). In a culture where the return of reality contest Project Runway is hotly anticipated, it’s obvious that the public has some thoughts on fashion, so why doesn’t The September Issue?

Cutler includes a nice bit near the finale where Vogue’s lead stylist, Grace Coddington (like Wintour a 20-year veteran of the mag), commandeers the filmmakers themselves for the do-over of a photo shoot Anna had previously nixed. Intercutting Richman’s camera-eye perspective with the eventual photos themselves is a sly touch, and coupled with the film’s increasing focus as the issue reaches its close on shots of page layouts arranged end to end like storyboards, there’s something being said about cinema and fashion, creation and selection. Cutler tries desperately to make a mountain out of the molehill that is the Grace/Anna relationship (the artist and her editor), but it never quite materializes into real drama—throughout there’s a sense of quiet conflict and shared, deep respect, while it feels like the film’s waiting for fireworks.

The September Issue’s main stumbling block may well have been Wintour herself. I’d be surprised if the filmmakers were as satisfied with their access to Anna’s history and psychology as they were with their access to the halls of Vogue. Aside from a slight hint of emotion betrayed when Wintour discusses how her family views her work (“They think its silly”), there’s no material that pierces beneath that famous veneer, nothing to really make The September Issue much more illuminating about Wintour, fashion, or Vogue than the merely reading the magazine itself.