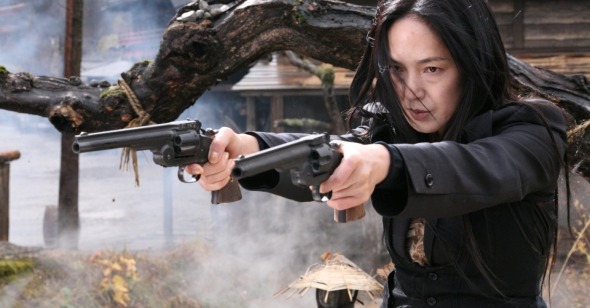 Once Upon a Time in the East
by Leo Goldsmith

Django, Tarantino, Miike: These names alone are enough to tell anyone whether or not Sukiyaki Western Django isfor them. If you only know the middle guy, don't bother (and for shame!); if you know and like all three, you've probably already seen and blogged about the movie anyway.

Takashi Miike's career spans some 40 feature films, twenty direct-to-video releases, a dozen or so works for television, and a stage adaptation of Zatoichi. He’s known to popular Western audiences, if at all, for his excruciating 1999 psycho-horror Audition. And whereas a lot of Miike's work falls into this genre, just as much falls outside of it or pushes its margins. 2001's The Happiness of the Katakuris switches from TV-quality drama to lavish musical to claymation within seconds, and more than one of his films splices yakuza action with J-horror. Much of Miike's most interesting films turn on playful genre-mashing, and Sukiyaki Western Django, as the title suggests, is itself a hot-pot of styles from Orient and Occident, re-appropriating Yojimbo back from the Italians and translating the image of Franco Nero's laconic Django icon into that of a stubbly Japanese gunslinger.

It should come as no great surprise that the first person we see onscreen in Miike's new film is Quentin Tarantino, lounging in a patently phony Western sunset landscape complete with cardboard Mt. Fuji and hawk-calls and mission bells on the soundtrack -- it all has the flatness of a David Hockney painting, Soon, with an unlikely swiftness, the paunchy American director gymnastically blows away some menacing Japanese heavies (spraying the two-dimensional backdrop with stage blood), before whipping up the movie's titular dish with a snake egg. This prologue (and Tarantino's campy, barely watchable performance) is mercifully brief, but it establishes the mood of the film: loud, jolly, bloodthirsty, and painfully esoteric.

This is, of course, fanboy country—even Tarantino's character, Ringo, is a reference to Duccio Tessari's spaghetti western character—and, once underway, its plot dutifully ticks off shots, archetypes, and scenes from a familiar, if quite thorough checklist. An embattled ghost town, two warring tribes between which Django (Hideaki Ito—here “the gunman”) violently insinuates himself, a tragic hooker with a heart of gold (from whom, rather pointlessly, Django receives a noisy off-camera blowjob), a Gatling gun in a coffin: all pile up perfunctorily with enough blood, guns, and gold to keep things reasonably entertaining. Awkward mash-ups of chanbara and horse-opera abound—call it kabuki Corbucci—with signposts for "Nevada" written in kanji, Morricone trumpetry mixed with evocative Eastern pan-fluting, and Japanese actors speaking in an amusing, broken Western slang throughout, with characters perpetually "fixin'" to do something or uttering banalities like "A man's gotta do," etc., in a comically unconvincing manner.

And while this works for the most part, the film is ultimately not quite as clever as it thinks it is. Even the action sequences are more about Foley than choreography, and so the film largely rests on the oddity of its mix of styles and its parade of genre in-jokes. Of Miike's recent films, Sukiyaki perhaps most resembles Izo, with its bizarre mixture of plasticity and ultraviolence, but the new film is more a playful pastiche than a dark jaunt down a samurai rabbit-hole. Although it's slightly less bloody and more coherent than its predecessor, Sukiyaki is also much less exciting.