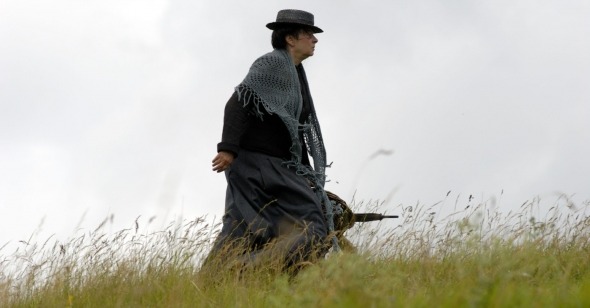 The paintings of Seraphine Louis, the subject of Martin Provost's elegant, if somewhat reserved, film, lie somewhere between folk art and modernism, in the artistic grey area known as "art brut." Coined by the artist Jean Dubuffet, who specifically sought out and collected art made by asylum inmates, this movement denotes those artists whose spontaneous, untutored techniques rhymed with those of Cubists, Dada, and Futurists, and matched modern artists' desire to subvert, revolutionize, or "unlearn" prevailing aesthetic conventions. This designation of "outsider" or "naïve" artists has come to classify those—like Adolf Wölfli and Henry Darger—who remained largely anonymous while they were alive, as well as many others—like De Chirico, Artaud, or even Daniel Johnston—whose mental illness existed alongside highly significant artistic careers.

In Seraphine, Provost laudably avoids the merely romantic image of the artist-visionary, like those fanciful notions of a young William Blake hallucinating a tree full of angels on London's Peckham Rye. Instead, and through Yolande Moreau's astonishing performance in the title role, Seraphine is volatile, pitiable, comic, and crazed, but she is never simply a starry-eyed dreamer whom folks just don't understand. In 1914, at the outset of the film's story, she is a maligned, middle-aged spinster in the rural town of Senlis, working as a maid, laundress, and cook by day, and painting her oracular, proto-psychedelic visions of nature by night.

In the folk-art tradition, she combines any materials she has at hand to mix her paints—cow's blood, candle wax pilfered from the cathedral, some indigenous pond scum—but she receives little praise for her work, suffering humiliation, poverty, hunger, and servitude to the local gentry. It's not until the serendipitous visit of Wilhelm Uhde, an art collector and dealer of "modern primitivists" (Rousseau is one of his "discoveries"), that the florid, expressionistic fury of Seraphine's art is recognized. Provost delays the first real glimpse of her work for as long as possible, ensuring a good shock for those who've never seen it: her paintings represent a phantasmagoric vision of the natural world, surpassing Georgia O'Keefe's floral erotica, approaching William Blake's visionary fervor, and matching the perspectivist delirium—as well as the precarious mental state—of Munch and Van Gogh. "I talk to the birds, the flowers, the insects," she tells Uhde, by way of friendly advice, "and I feel better."

But for all the kaleidoscopic fire of Seraphine's artistic vision, it's a wonder that Provost's film cleaves so closely to the conventions of the big-budget, cinéma de qualité biopic. Perhaps this is an intentional strategy meant to serve the subject, an effort not to overpower Seraphine's own extraordinary work with cinematic pyrotechnics, a sin that Julian Schnabel seems to joyously, boorishly revel in. But even so, Provost's film could have done with a small dose of his bravado. Instead, it errs on the side of the tasteful, dabbling only with lightly symbolic images and a rapt appreciation for the sights and especially the sounds of nature.

Instead, the film relies heavily on Moreau's gripping, continually surprising performance to effectively convey the oracular urgency and fractured, Dionysian mentality of Seraphine de Senlis and her work. A friend and sometime collaborator of Agnès Varda, Moreau appeared most recently as the protagonist of "Louise-Michel," a crass, violent, and deliciously acidic French comedy about transgender, anti-capitalist terrorists. Her turn as Seraphine is no less shocking but also unexpectedly cuddly: Moreau immediately communicates her character's sensitivity, humor, and fearsome passion with an earthy physicality—climbing trees, skinny-dipping, and urinating standing up. She's an endearing presence when afield, but in the cramped studio at Senlis she is mesmerizing, working her vast canvases furiously while belting out hymns and speaking in tongues. Here in Moreau's embodiment is the essence of what is intriguing, beautiful, and irreconcilable about Seraphine Louis's work: its forceful, irreducible physicality.