Miss Pettigrew Lives for a Day 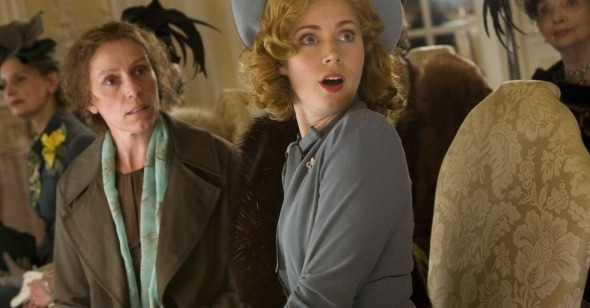 A middle-aged, getting-your-groove-back Cinderella story: Miss Pettigrew, an unsuccessful domestic used to taking her meals in breadlines, maneuvers a job with a flighty American ‚Äúactress‚Äù abroad, Delysia Lafosse. Just like that, prim Pettigrew is off the streets and hovering around the nexus of the London smart set, where her self-possession and propriety are suddenly rare and valuable commodities. It doesn‚Äôt take long for a reasonably handsome suitor to notice.

The film‚Äôs basis is a novel by one Winifred Watson, written in 1938, the year in which Miss Pettigrew Lives for a Day is set; shadows of the depression and oncoming war are cast over the proceedings. Pettigrew, as played by Frances McDormand, starts out a dun-clad frowse, hair a crisped nest, seemingly incapable of taking ten steps in any direction without confronting some ungraceful incident. All of this changes with her introduction to Amy Adams‚Äôs Lafosse, a dialogue spouter who punctuates her lineswith a squirty giggle, and whose sheer momentum of living doesn‚Äôt allow Pettigrew space for self-consciousness. Lafosse is the live-in tart of a nightclub owner (Mark Strong), screwing another fella for a stage role (Tom Payne), and desperately in love with a third, noble suitor who wants her and her only (played by Lee Pace; the character has no worthwhile connections, naturally). She plugs Pettigrew into the role of her ‚Äúsocial secretary,‚Äù charged with keeping all the balls in the air (ahem), and to everyone‚Äôs surprise, the Miss does so quite well‚ÄîMcDormand exudes the appropriate sense of astonishment in her newfound capacities.

The film takes place over a roughly 24-hour period, in which these two ‚Äútypes‚Äù gradually intermingle, and so start the next day attenuated into something more human. McDormand‚Äôs Cameron Frye is shaken out of her ‚Äúsackcloth and ashes‚Äù to learn a little self-regard from Adams‚Äôs Ferris Bueller, while the starlet lets down her effervescent act long enough to remember that she‚Äôs really just a love-starved girl from Pittsburgh going after the brass ring.

I didn‚Äôt laugh at any point in this comedy, so-called, but this isn‚Äôt as big a deal as one might think, because except for a few hard-brake punchline stops (Pettigrew being taken for a salon facial and‚Äîmy stars!‚Äîeating the cucumber slices over her eyes), the movie puts more of a premium on being likable than hilarious. And the leading ladies are both smart performers, reasonably well served by their director.

The demographic of this film isn‚Äôt hard to divine: women of a certain age who‚Äôve been unserviced by the crassness of the multiplex, and who‚Äôve taken refuge in boutique releases imported from the British Empire. It‚Äôs politely frisky fare, with a few glimpses of bare bum, and set-dressed to the nines in the finest period patterns (Lafosse‚Äôs crash pad is the only excuse for widescreen, an opulent gold-leaf fantasia of high-living, complete with Venus-on-the-half-shell bathtub). The most common reaction to it will be either ‚ÄúWhy do they even bother making that stuff?‚Äù or ‚ÄúWell, that was sweet.‚Äù Neither view is without merit.