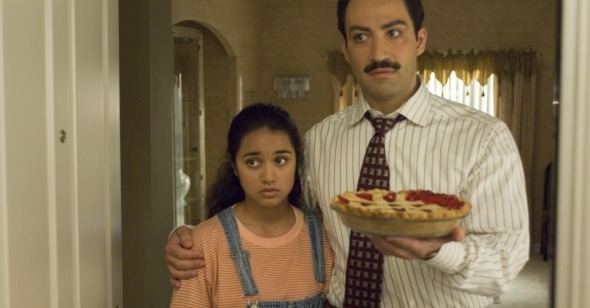 Everything Is Privates
by Michael Koresky

Not far into his feature directorial debut, Towelhead, Alan Ball offers us the sight of a thirteen-year-old girl having her first period in a bathroom stall; this is shot from a low angle, with the camera positioned near the floor, peering up through the girl‚Äôs blood-stained panties as she stares down in perturbation. To acknowledge the sheer inappropriateness of Ball‚Äôs framing is not to take a moral stance (Summer Bishil, who plays the character, was close to twenty when she acted in the film), but rather to call into question the neophyte filmmaker and longtime overpraised screenwriter‚Äôs level of taste, imagination, and sophistication. As with American Beauty, that culturally regressive lump of tackiness disguised as a sober-minded state-of-contemporary-society treatise that won Ball a screenplay Oscar, Towelhead (which debuted at Sundance under the title ‚ÄúNothing Is Private‚Äù) means to provoke, to hold up a mirror to a suburban America riddled with sexual deviance and puritanical hypocrisy. Rather, all it manages to reflect is Ball himself‚Äîhis obsessions and hang-ups haphazardly mashed up into a lopsided narrative that, though based on a novel by Alicia Erian, plays like a litany of his movie fetishes.

The film opens with another of Ball‚Äôs showily ‚Äúintimate‚Äù moments: sexually emergent Lebanese-American teen Jasira is first seen shaving her pubic hair in front of her mother‚Äôs lascivious and molesting boyfriend (Chris Messina). Soon enough, monster mom Gail (the usually reliable Maria Bello, here shockingly shrill) is blaming Jasira for what she perceives as unchecked flirtatiousness (‚ÄúThis whole thing is your fault,‚Äù she upbraids her) and shipping her off to live with her father, Rifat (Peter Macdissi), in a suburb of Houston. The prefab community, shot with that wholly expected visual condescension that has become poor movie shorthand for viable social commentary (rarely is there an American flag captured on camera without some sort of pointedly canted or extreme angle), is much like Rifat, fastidious and quietly malevolent. Most alarming is the widely grinning, seemingly good-natured next-door neighbor and army reservist Mr. Vuoso (Aaron Eckhart)‚Äîof course, this being an Alan Ball film, Vuoso‚Äôs corn-fed jocularity conceals an aggressive pedophilia.

As with American Beauty, Towelhead, set without clear reason during the first Gulf War, is unedifyingly perched on the edge of satire; why this material requires such a strategy is beyond me, and judging by the film‚Äôs schizoid approach to character and tone, seemingly beyond Alan Ball as well. One moment, his film is indulging in Jasira‚Äôs sexual fantasies, portrayed as embarrassingly overstylized music-video daydreams, and the next it‚Äôs ‚Äúdaring‚Äù to show, in graphic detail, a fortysomething man groping a 13-year-old girl from behind, his hand shoved down the front of her jeans until it reemerges dripping with blood. It‚Äôs the sort of attention-grabbing stunt that one would normally have to brave a Todd Solondz movie to see (and even minus Solondz‚Äôs largely indefensible aesthetic stringency), and one that Ball means to sell as artistically viable and refreshingly dangerous. Rather, all imagery like this does is dilute whatever credibility or value Towelhead might have had as a portrait of alienation told from the point of view of a culturally invisible person like Jasira. Instead of trying to get into the mind of his disenfranchised young heroine, taken advantage of by others and racially demonized by society at large, Ball settles for narrative prurience and visual clich√©s.

With childhood‚Äôs emergence into sexual awareness all too commonly dramatized in R-rated films for adult audiences, Alan Ball never makes a compelling case with Towelhead, outside of his own childish provocation, why we should head back into coming-of-age territory, with its requisite tampon travails and discovery-of-masturbation scenes. Certainly his case isn‚Äôt helped by the lost Bashil, who seems only adept at either overemoting or adopting a deer-in-headlights stare, or with the rest of his cast, even Toni Collette, whose sympathetic, overprotective neighbor pops in and out of the narrative confusingly, likely a cutting-room casualty. Two hours of unremitting humiliation heaped upon a victimized teen girl, Towelhead is the kind of film that puts the ridiculous line ‚ÄúI miss looking at your magazines. They make me have orgasms,‚Äù into the mouth of a thirteen-year-old (referring to Vuoso‚Äôs stash of porn) and tries to pass it off as jarring honesty, or perhaps Solondzian poetry.

Towelhead is the dramatic equivalent of a cheap TV sitcom; yet rather than a laugh-line, nearly every scene ends with some sort of grotesque punctuation. Basically a hateful litany of bad behavior inelegantly strung together into a moralizing allegory it vapidly posits as quintessentially ‚ÄúAmerican,‚Äù Ball‚Äôs wretched pageant is precociously vile. And all that Ball can come up with to wrap up his film after two hours of cartoonish sadism is a banal ‚Äújoy of life‚Äù ending set in a hospital with a newly delivered baby. How opportunistic; like Alan Ball‚Äôs career.