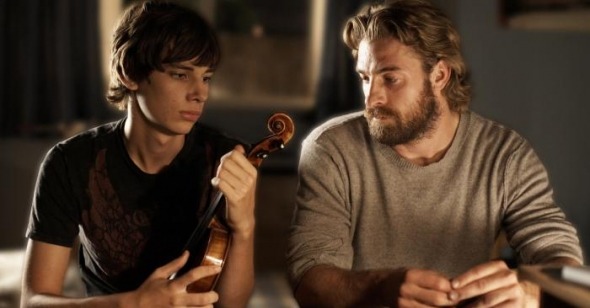 Burden of Dreams
by Jeff Reichert

If Atom Egoyan weren’t in such a hurry to cram all sorts of up-to-the-minute gewgaws (vidchats, xenophobia, handheld video recorders, even terror attacks) into the unwieldy, disjointed contraption that is his twelfth feature, Adoration, he might have turned out a mildly entertaining, if overly intellectualized piss-take on 1940s B-grade family melodrama—it even comes complete with shimmering Bernard Hermann-esque strings. Adoration‘s the unlikely spawn of Ararat‘s politically correct historical guilt complexes and the lurid classic noir drag of Where the Truth Lies, and while it betters both of its immediate predecessors (generally by leaps and bounds, it must be said), it’s still a fairly silly affair. Imagine a dickless Leave Her to Heaven with a degree in media studies. Compulsive in his inability to abandon his “core concerns”—those things that auteurs are generally required to repeatedly insert into their films, whatever the cost to watchable dramaturgy, which here include screens within screens, the distancing, seductive pull of technology, and the shiftiness of identity—Egoyan clutters a generally workable mystery with the deadly weight of dusty concepts.

Egoyan’s best films jumble narrative and fracture perspectives around certain recurring themes (usually loss, absence, and memory). Until Exotica his actors succeeded more as examples of inspired pornoesque amateurism, but given his tendency of late to write ideas rather than characters, the increasing equality in emphasis between performance and structure has proven deadly. Both Ararat and Where the Truth Lies suffered from weak protagonists: David Alpay’s slim shoulders proved unable to bear the heavy weight of suppressed Armenian genocide, and the latter’s Alison Lohman, though game, wasn’t vamp enough for a role that required tough, knowing sexuality. At Adoration‘s center is an Egoyan male in the Alpay mode—frail, pretty, intellectual, and largely vapid. Devon Bostick’s Simon is a high schooler obsessed with the death of his parents who is goaded by his French teacher (Arsinée Khanjian)—for reasons unknown—into delivering a lengthy monologue to his classmates in which he recasts his family history through the lens of an aborted terror attempt, with his father as the terrorist and his pregnant mother the unwitting bomb mule. As the young’uns do these days, Simon takes his story to the internet, creating an explosive debate that ricochets throughout a set of implausibly staged video chatroom discussions (maybe he should have Tweeted) and back into the nonvirtual world.

Simon’s monologue doesn’t explain why he now lives with his Uncle Tom (a restrained, careful Scott Speedman ably treading Bruce Greenwood territory), a tow truck driver not over the death of his sister, Simon’s mother (Rachel Blanchard), who harbors a lifetime of anger towards his recently passed father. Speedman far outclasses the largely zombified Bostick, and even goes toe-to-toe with Khanjian’s studied eccentricities on her home turf. The question, as in nearly all of Egoyan’s films, lies in why these three individuals need exist in the same narrative, and Adoration is carefully structured to deliver the answer. Yet even though the finale approaches a warm catharsis uncommon to its director, Adoration still feels unnecessarily muted.

Near Adoration‘s climax, Simon tosses his ever-present handicam onto an impromptu pyre built on the lakeside dock where his mother used to play violin. Amidst the flames, the camera freezes on a shot of his bedridden grandfather, and as the camera burns the screen grows increasingly pixilated, and the surrounding plastic begins to melt. It’s a lovely image and an apt metaphor for the film as a whole: often overdetermined, but never less than watchable. (If one were to remix Adoration sans technology and terror, the family mystery might just register as intriguing in its own right.) Egoyan remains a solid craftsman—the camera’s usually in the right place, pointed at something worthwhile—and the film manages to, at times, punch through its creaky grafted-on conceptual framework. Egoyan’s just finished directing the first screenplay he hasn’t written himself, and even if it’s the product of the scribe who brought us such questionable fare as Fur the collaboration might just be what an imposingly smart, very talented filmmaker might need to shake off the doldrums.