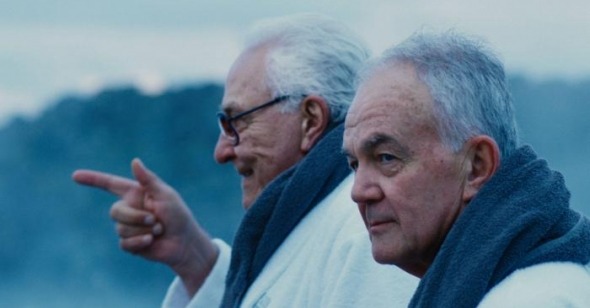 It Takes Two
By Danny King

The pitch for Land Ho! must have sounded bizarre: ‚ÄúThe directors of Passenger Pigeons and Quiet City team up for their version of The Trip!‚Äù A little background: while considering a vacation to Iceland, Martha Stephens, the film‚Äôs co-writer-director, was inspired by the notion of making a movie there with Earl Lynn Nelson, who had given two extraordinarily entertaining supporting performances in Stephens‚Äôs previous features (Passenger Pigeons, Pilgrim Song). Around the same time that Stephens proposed this idea to fellow independent filmmaker Aaron Katz ( Dance Party USA, Quiet City, Cold Weather) as a potential co-directing effort, Stephens and Katz saw Chad Hartigan‚Äôs This Is Martin Bonner (2013), and realized that its lead actor, the Australian-born Paul Eenhoorn, would make a perfect foil to Nelson. The actors agreed, the production was crammed into a tight timeframe (in order to make the Sundance deadline), and Land Ho! is now hitting theaters under the Sony Pictures Classics label‚Äîthe highest-profile distributor either filmmaker has worked with.

Because the movie‚Äôs conception is tied so directly to its main actors, it‚Äôs worth emphasizing what makes each of these men unique. Nelson‚Äôs is a fascinating story: Stephens‚Äôs cousin and a Kentucky-based ocular plastic surgeon by day, he has an inimitable voice, at once rocky and twangy, and a no-bullshit conversational manner that makes him highly watchable, even as his natural rhythms and candid, idiosyncratic phrasing (i.e. explaining the contours of an ‚ÄúAppalachian ass‚Äù in Pilgrim Song) mark him as a nonprofessional actor. (Nelson‚Äôs so singular that Land Ho! executive producer David Gordon Green even cast him in a Season 4 episode of Eastbound & Down, Nelson‚Äôs only acting job outside of a Stephens film so far.) Eenhoorn, by contrast, is a career actor, and his performance in Martin Bonner was for many of us a sublime introduction to his brand of beguiling restraint and attentive silences. That these two glaringly different acting styles‚ÄîNelson‚Äôs straight-shooting vulgarity on the one hand, Eenhoorn‚Äôs thoughtful docility on the other‚Äîare bound to clash under any circumstances proves especially fitting for a film about the colliding of recognizable buddy-movie personalities.

Land Ho! draws elements from other familiar genres: the road movie (periodic title cards log the various Iceland locations) and the fish-out-of-water comedy. The movie begins with Mitch (Nelson), a retired surgeon living in Kentucky, inviting his ex-brother-in-law, Colin (Eenhoorn), on a trip to Iceland. Both men could use a vacation: Mitch‚Äôs brash disposition doesn‚Äôt square well with the realities of house-confined retirement, while Colin, in addition to having gone through a recent divorce, still seems to feel some disappointment over his long-ago decision to exchange his aspirations as a French horn player for the financial reliability of a bank job. After some brief convincing (notably, Mitch happily offers to finance all of the trip‚Äôs major expenditures) and a few odd film references in the dialogue (Rio Bravo, Silver Linings Playbook, Sleepless in Seattle), Colin reluctantly agrees to accompany Mitch.

The early Iceland scenes firmly establish Colin and Mitch‚Äôs odd-couple pairing. These include dinner-table conversations that, with their haute cuisine and occasional spurts of celebrity impersonations, suggest Michael Winterbottom‚Äôs The Trip, and a stroll through an art gallery where Colin offers sensible, dramatic interpretations of the gallery‚Äôs paintings, while Mitch takes note of a woman‚Äôs bellybutton that could easily hold two or three shots of tequila. However, for a movie that revolves so closely around the personas of its lead actors, Land Ho! is at its strongest and most revealing when Nelson and Eenhoorn are interacting with other people. Mitch and Colin‚Äôs duet is first interrupted by the arrival of Mitch‚Äôs much younger cousin, Ellen (Karrie Crouse), and her friend Janet (Elizabeth McKee). The four of them share a meal that starts out humorously heated, with Mitch criticizing Ellen and Janet for not dressing in accordance with his leering preferences. But slowly revelations surface: Eenhoorn, for one, appears more relaxed with the added company; he‚Äôs clearly in his wheelhouse during Colin‚Äôs lovely back-and-forth exchange with Janet, in which he questions her‚Äîwith completely charming and sincere interest‚Äîabout her academic investment in Jewish mysticism. Meanwhile, Crouse, having appeared in Stephens‚Äôs previous features, continues her streak of wonderful supporting performances: while her characters in Pigeons and Pilgrim were both sullen and withdrawn, there were appealing traces of warmth and humor, as in her authentically awkward attempts to excite her distant boyfriend in the latter film. Land Ho! capitalizes on this by making Ellen‚Äôs entire register‚Äîchuckling reactions to Mitch‚Äôs randy language‚Äîplainly delightful.

Despite the actors‚Äô authenticity, Katz‚Äôs and Stephens‚Äôs character-building in Land Ho! is less rigorous here than it has been in their individual films. While it‚Äôs not necessarily a sign of lazy writing that Nelson, a Kentucky-based surgeon, is playing a Kentucky-based surgeon, it becomes naggingly clear that the filmmakers are largely content to coast on the chemistry of their actors. So when the movie aims for moments of emotional profundity‚Äîboth characters are single, for instance, and Colin is particularly melancholy about not having a nice woman to share his time with‚Äîthey feel less like instances of lived-in reality and more like Eenhoorn trying to fill in the script‚Äôs emotional blanks. Moreover, the potential moral ambiguity in Mitch‚Äôs character is mostly glossed over: a scene in which he pries into a honeymooning couple‚Äôs sex life hints at how quickly he can turn from amusingly frank to overly intrusive, but this fine line‚Äîwhich Katz explored so fascinatingly with Cole Pensinger‚Äôs character in Dance Party USA‚Äîis ultimately negligible due to how much the film embraces him elsewhere. And where Stephens‚Äôs earlier films employed surprising structural moves to reveal character‚ÄîPilgrim Song, for one, starts out as an honest look at a disaffected relationship before becoming its own strange, eccentric kind of buddy movie‚ÄîLand Ho! progresses in simple, conventional strokes.

Visually, Land Ho! on occasion resembles the filmmakers‚Äô past work: a snap-zoom on Mitch and Colin as they stand underneath the explosion of the Strokkur geyser recalls the waterfall zoom-in from Katz‚Äôs Cold Weather, and the movie‚Äôs tendency to slowly pan across the Iceland vistas while the two characters are talking is in keeping with the calm curiosity toward landscapes and natural environments Stephens evinced in Pigeons and Pilgrim. But compared to a film like Katz‚Äôs Quiet City (also shot by DP Andrew Reed), which buffered its jabber-heavy scenario with lyrical interludes of sunsets and moving trains, Land Ho! is often uninspiringly straightforward‚Äîeven anonymous-looking.

The confident reliance on the actors‚Äô charms seems partly responsible for this seeming lack of an outward authorial imprint. Most of the filmmaking decisions‚Äîlike the use of two cameras during shooting, allowing the actors to behave organically and spontaneously without having to worry about hitting their marks or being fed lines of dialogue off-camera‚Äîare geared primarily toward showcasing the two distinct personalities at the movie‚Äôs core. An early scene in an airport consists mainly of Nelson reading a series of prospective restaurant menus from a guidebook‚Äîbasically a variation on the age-old joke of someone being so interesting that you could listen to them read the phonebook. Land Ho! functions pleasantly as a vehicle for these two actors, but its ambitions are transparently low-key, and a lot of the situational humor is broad enough that, with a few tweaks‚Äîname-brand actors, less-explicit horniness from the Mitch character, Fox Searchlight backing, a potential love interest that isn‚Äôt just restricted to a scene or two (like Land Ho!‚Äôs terrific Alice Olivia Clarke)‚Äîthere‚Äôs no reason that this movie wouldn‚Äôt make a good buck with the Best Exotic Marigold Hotel demographic. But Eenhoorn and Nelson‚Äôs specific temperaments are engaging enough that Land Ho!, whatever its shortcomings, always retains a sufficient measure of novelty.