The Song of Sparrows 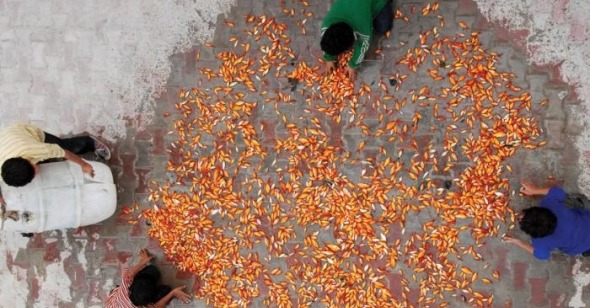 Birds of Paradise
by Michael Koresky

To cinephiles, Iranian director Majid Majidi‚Äôs always been deemed the poor man‚Äôs Jafar Panahi (or the poor man‚Äôs Abbas Kiarostami, per the next, more academic level of discourse). Of course, importantly, that means next to nothing to most moviegoers, for whom Majidi is simply the most accessible, compelling natural storyteller to come out of that country‚Äôs Nineties ‚Äúnew wave.‚Äù If their Miramax or Sony Classics profits are any indication, Majidi‚Äôs Children of Heaven and The Color of Paradise have surely been seen by more people than Kiarostami‚Äôs Where Is the Friend‚Äôs House? or Panahi‚Äôs more political, explicitly self-referential The White Balloon and The Mirror, all of which have similar subject matter. With his likeable, sentimental narratives, Majidi has been somewhat simple to write off, then, as his takes on family and tradition cross cultural borders with ease, resulting in some critics‚Äô accusations of patronization, if not moralism.

Perhaps now, with the flaring up of political tensions coinciding with the dying down of the influx of Iranian cinema in the U.S., Majidi‚Äôs new film, The Song of Sparrows, can be viewed on its own terms rather than as a reaction to its contemporaries. As visually and narratively spare as its director‚Äôs other films, yet shot and edited with a lovely, slightly more meandering pace than many of Majidi‚Äôs earlier, more whittled-down, single-minded works (The Color of Paradise and Children of Heaven stay on tightly focused narrative tracks), The Song of Sparrows initially seems to provide an outline for another single problem‚Äìsolving Iranian story, as ostrich farmer Karim (the commanding, if ever so charmingly buffoonish Reza Naji, who won best actor at Berlin for this performance) is called away from work to discover that his deaf daughter Haniyeh‚Äôs hearing aid has dropped in a backyard well and broken. The price for a replacement, 4000 tomans, is steep for a man of such insignificant means, and to add insult to injury, an ostrich escape (an event which can‚Äôt help but appear comically staged, so daintily awkward are the flightless bird‚Äôs movements) ends in his losing his job. He quite literally stumbles upon new work upon his visit to nearby Tehran when a businessman mistakes his moped for a taxi and hops right on; Karim takes advantage of this opportunity, shuttling wealthier patrons around the city, and hoping to raise enough money for his daughter.

Yet Majidi‚Äôs film proves surprisingly expansive, in terms of both emotional and narrative consequence: what‚Äôs set up as a perhaps predictable cause-and-effect tale (and maybe a variation on Panahi‚Äôs masterpiece Crimson Gold, with its bike messenger serving as unwitting tour guide to modern-day Tehran‚Äôs class divisions) recedes a bit into a more naturalistic detailing of lives simply being lived. Majidi establishes and evokes domestic space better here than ever before, especially in a late-film turn which leaves Karim housebound for a spell. As the film continues, it becomes less about daily transactions (though Karim‚Äôs monetary dealings with various city folk makes up much of its running time) than the constant push-pull between tradition and modernity in rural Iranian life, with Karim‚Äôs taste of possible upward mobility momentarily getting in the way of his love for his family, especially his son, Hussein, whose own plan to breed and sell goldfish becomes a parallel story with nearly equal narrative weight.

Another thing that The Song of Sparrows proves, in addition to a newfound unrushed, contemplative strain in its director, is that few wild animals make for more appealing cinematic subjects than ostriches. Opening with a close-up of an ostrich head gawking against a pure white sky, Sparrows goes on to film the clumsy creatures in loving, humorous detail, surveying their prehistoric necks and expressive eyes with bemused detachment (they have an inherent cartoonishness that was exploited to best effect onscreen in Fantasia‚Äôs brilliantly harebrained Ponchielli ballet). And perhaps this gorgeously lumbering beast isn‚Äôt just there for show: When, in one of Majidi‚Äôs shrewdest cuts, we discover that Karim has disguised himself as an ostrich to try and lure back the runaway animal, stalking around the nearby vacant hills and plains in an elaborate feathered costume, it becomes clear that Karim is something of a flightless bird himself, craving something more, but not having the wings or wherewithal to make it a reality.