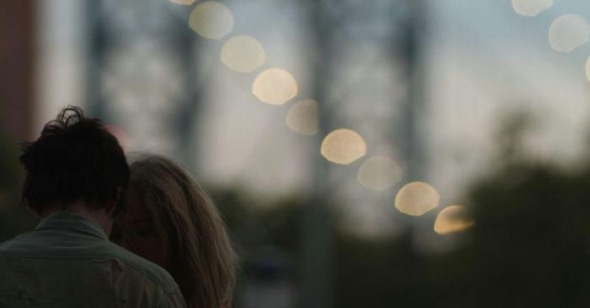 In Jack and Diane, writer-director Bradley Rust Gray attempts an intriguing hybrid. A claustrophobic opening shot deposits us in a bathroom, where we obscurely view red drops falling on a toilet bowl seat and into the water. A young woman rises and turns to reveal a nosebleed as the source, just as her scream builds on the soundtrack and unrecognizable but vaguely gruesome images rush past with startling rapidity. An intertitle, “Earlier,” transitions us in time and tone to a supposed back story, which sees the same blond British girl, Diane (Juno Temple), pacing around New York City trying to find a phone on which to call her sister. This takes her into a retail store where she comes upon a female named Jack (Riley Keough), a meet-cute that cues another nosebleed on Diane’s part. Intertwining modern romance and horror tropes, Gray seemingly aspires to craft a more unusual kind of coming-of-age tale.

Via this incorporation of bloody bodily functions—later at a club with Jack, Diane discovers her period’s just started while in the bathroom—the filmmaker also gestures toward body horror in a naturalistic vein. Such references to regular human physical processes are frequently returned to in the film—the heightened sense of corporeality is further manifest in Jack’s face which, after an early skateboarding accident, sports slow-healing bruises and scratches for much of the movie. Taking things to a more surreal realm, integrated stop-motion sequences, care of no less than the Quay brothers, abstractly and slowly build backwards toward the creeping presence depicted in the opening sequence. Shots included in these interstitials contain various organs, meat, coarse hairs braiding together, conveying a sense of something subterranean and organically monstrous growing.

To what end all this goes is harder to say. Gray is good at portraying the seeming certainties and confusions of developing love amongst the college-aged in non-condescending fashion just as in his previous feature, The Exploding Girl. In Jack and Diane, he vividly captures the girls’ first kisses and morning after—the giddiness and dreamy afterglow—through impressionistic uses of music and close-ups on faces and body parts that portray desire, hesitation, surrender, and then post-kiss bliss. That this may or may not be Diane’s first same-sex relationship is left hazy although we gather it is her most significant coupling of any kind to date, and while Jack is the more sexually experienced, this seems her first encounter with an accompanying emotional connection; they’re both punch-drunk on the newness.

But these phenomena don’t convey anything more complex than cliché, implying chestnuts along the lines of love transforming us. Or perhaps that it reveals our primal, animal natures? Interpreted glancingly, given that the metamorphoses tend to be linked to episodes of particular intimacy, the threads might even be taken as regressive suggestions that Jack and Diane’s sapphic desires and expressions of sexuality are turning them into bloodthirsty monsters (similar to Heavenly Creatures) except that the director’s handling of the relationship otherwise and especially the sweetly hopeful conclusion don’t support such an intolerant reading. Well-meaning as Jack and Diane may be, its metaphor doesn’t feel developed enough to attain deeper meaning; thus its genre-crossing seems almost a cynical gambit meant to raise what’s already unique on screen—a sincere look at young lesbian love and female sexuality—to a superficial high-concept level rather than trusting that these matters could hold their own in a more down-to-earth exploration.