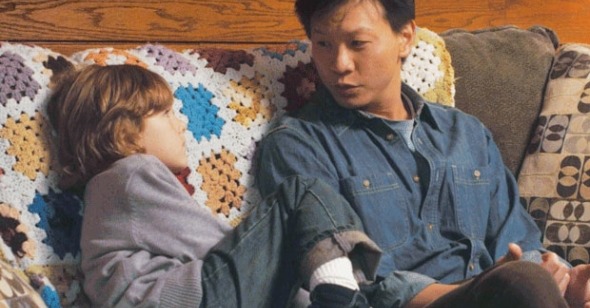 Everyone‚Äôs Got a Story
By Michael Koresky

When Patrick Wang was submitting In the Family to various festivals, the first-time filmmaker evidently didn‚Äôt come wielding a compelling enough backstory. According to Wang, it was rejected by more than thirty venues before premiering at the 2011 Hawaii International Film Festival. It‚Äôs not as if the subject matter and overall tone of the film‚ÄĒa politically relevant study of the legal limitations faced by gay couples in the U.S. told with a mix of humane warmth and filmic sterility‚ÄĒare anathema to the current American independent film scene. Perhaps programmers found that In the Family wasn‚Äôt homegrown enough (though set in Tennessee, Wang is from Texas and the film was shot in New York) or that it was too long (though nearly three-hours the film is never leisurely). More likely, they were just too inundated with piles of screeners to even find the time to look at it; in the digital era, when films are made so cheaply, it‚Äôs more difficult than ever for debut filmmakers to get heard without showing up with the proper connections.

We shouldn‚Äôt be shocked when movies as emotionally generous as In the Family fall through the cracks; we should just be encouraged when they get noticed. And that‚Äôs the case with Wang‚Äôs film: the writer-director decided to self-distribute it in New York, and based on its one-theater screening, it began to attract strong word of mouth from the likes of Roger Ebert and the New York Times, resulting in an unexpected Independent Spirit Awards nomination for Best First Feature (predictably losing to Margin Call, starring the likes of those indie stalwarts Demi Moore, Kevin Spacey, and Jeremy Irons). Since then, Wang has basically taken the movie on the road, showing it in small venues across the country and attracting appreciative audiences; its minor success has encouraged an almost unheard-of second New York release. Wang may not have had an industry-appealing narrative last year when he was first striking out, but he sure has one now.

With all this accumulating hype, one might expect In the Family to be some kind of expansive, ungainly misunderstood masterpiece √† la last year‚Äôs generously recouped Margaret. As it turns out, it‚Äôs both more and less than this, both too stringent in its aesthetic and too benign in its storytelling to be mistaken for grand. The most refreshing thing about Wang‚Äôs film is that it doesn‚Äôt seem to aim for much beyond its own modest parameters, trying to do nothing more glamorous than find cinematic ways to tell an honest story honestly‚ÄĒa noble goal if there ever was one, especially in a contemporary independent film landscape dotted with the disingenuous and the didactic. The film is perched on a fine line: with the slightest twist of the wrist, In the Family could have fallen into either hapless melodramatics or political moralizing. Instead Wang simply allows his relevant (and, yes, important) themes to bubble up out of lived experience. Like its seemingly accepting community, the film doesn‚Äôt make an issue of its gay Asian-American protagonist‚Äôs otherness‚ÄĒas long as it's convenient, that is. In the Family casually asserts that race and sexuality simply don‚Äôt matter, until they do.

Wang‚Äôs warm, open brand of storytelling at times feels at odds with his aesthetic, however. As the film begins, we‚Äôre allowed to eavesdrop on the lives of long-term couple Joey (Wang), a house contractor, and Cody (Trevor St. John), a high-school math teacher, who live with their mop-topped six-year-old child, Chip (Sebastian Banes, cute but often borderline unintelligible in his rambling Southern drawl), Cody‚Äôs biological son from an earlier marriage. Wang captures their domestic routine in mostly static single takes that isolate movement in the frame in a way that feels both naturalistic and highly stylized. His decision to shoot so little coverage might very well have had something to do with the film being difficult to cut down to more manageable size. It‚Äôs a visual decision that both distinguishes and dogs the film‚ÄĒits rigorous mundaneness is sometimes too pronounced, occasionally lending it an awkward, quiet showiness.

Fifteen minutes in, Joey is summoned to the hospital where Cody must undergo emergency surgery after a car accident. After t√™te-√†-t√™tes with vaguely hostile staff, Joey is confronted with the sadly inevitable: not being official family, he isn‚Äôt allowed to visit Cody‚Äôs room along with his sister, brother-in-law, and Chip. Unable, or at least unwilling, to use socially acceptable hetero terminology, Joey can only say ‚ÄúI live with him‚ÄĚ to describe his relationship with Cody to hospital administration. Passive Joey stays behind, but soon a doctor emerges to inform him that Cody has died‚ÄĒor rather we assume this is what they‚Äôre saying because we cannot hear the conversation, as Wang decides to cut outside the window and show them from a polite distance, the only audible sound the roar of cars as they pass. Such a technique, especially for scenes in which tragic news is related to a character, has become part of the cinematic vernacular, a way of leaving the unspeakable unspoken, and we can take it as either emotional cop-out or tasteful remove. Like Joey, In the Family is occasionally too well-bred and detached for its own good: a post-funeral, six-plus-minute single take of Joey emotionlessly sorting through mail at his dining-room table while behind him Chip goes about the strenuous task of pouring himself a glass of coca-cola in the kitchen seems to aim for thoughtful, Hou Hsiao-hsien-ish tableau, in which melancholy and everyday hustle-bustle exist side by side, but more often comes across as overly fussy and inorganic.

Such foregrounded art-cinema techniques are best employed by Wang to move story along rather than to evoke stasis. There‚Äôs a smartly cost-effective composition in which a crucial offscreen altercation is intimated only via the soft glow of flashing police lights glimpsed through a sliver of a front-door window, and a flashback to a past Thanksgiving, in which Cody‚Äôs family warmly welcomes Joey into the fold while at the same time subtly treating him like an outsider, is a master class in difficult-to-read family dynamics, well-performed by a cast up to the challenge‚ÄĒwhen Cody‚Äôs mother makes an off-handed joke about Joey being ‚Äúfrom outer space,‚ÄĚ we‚Äôre not sure whether to laugh along or cringe. It‚Äôs in moments like these that the film‚Äôs strange air of detachment (a feeling enhanced by the perhaps overly crisp digital images of the Red camera, which can lend many films an unwarranted austerity) feels appropriate‚ÄĒdespite In the Family‚Äôs best attempts at normalizing its main character, it occasionally must concede to his alien presence. Joey‚Äôs past is never spoken of until very late in the film: a Southern orphan of Chinese heritage who, after age three, was raised by foster parents who also died, Joey is a nowhere man that the film is determined to acknowledge as normal.

In the Family winds through an emotionally frustrating second act spurred on by the discovery that Cody named his sister executor of his will six years prior and left all of his assets in her name. Suddenly, Joey looks to Cody‚Äôs relatives like an illegal interloper with no rights, all the easier for them to snatch Chip away. He is then thrust into a situation in which he is forced to constantly confront his lack of personhood; Wang, as both actor and director, treats this revelation not with angst but matter-of-fact dismay. Even amidst hearing such horrors as an attorney saying that no lawyer will ‚Äúlegitimize that kind of stuff,‚ÄĚ Joey remains stoic. The film climaxes in a riveting half-hour-plus deposition for which Joey has summoned his ostensible enemies, simply so that they will hear him talk. Wang, like Joey, clearly believes that understanding comes through knowledge, the assertion of a shared humanity. This scene is a revelation for all listeners, both those on screen and in the audience: during what amounts to a lengthy monologue, we finally learn about Joey‚Äôs obscured past. The scene miraculously feels neither pedantic nor stagy. As it turns out, Joey has a story even more intriguing than Wang‚Äôs.