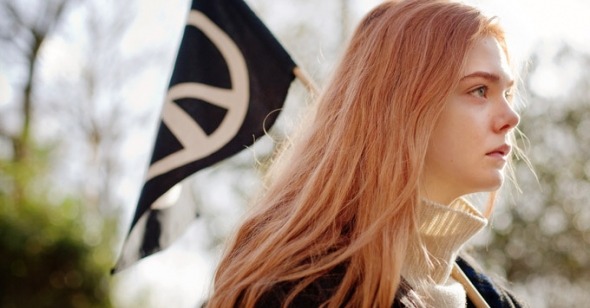 The Uncertainty Principle
by Jeff Reichert

Sally Potter‚Äôs Ginger and Rosa opens with an extended shot of an atomic explosion. This rippling detonation signals the host of dislocations that will affect the lives of the film‚Äôs not-yet-introduced protagonists over the course of the few months in early sixties London we‚Äôll share with them. That bomb blast, beautiful in its way, is a dramatic, if obvious, device from a filmmaker who has never shied away from bold gestures. Her Yes, was, after all, a 9/11 response in the form of a crosscultural romance written in iambic pentameter, and she remains best known for the conspicuous, if ultimately overly decorous, gender-bending of the lush period drama Orlando. An unsubtle catalyst, this bomb blast (cataclysmic things will happen soon, it portends), and Potter gives us time to luxuriate in its reverberations.

Soon after this, the film launches into another register entirely. The introductory scenes of Ginger and Rosa are a rush of disconnected exuberant sensations, as angelic red-headed Ginger (Elle Fanning) and her sultrier gamine best friend, Rosa (Alice Englert), skip through deserted fields, pick up boys, make out in alleyways, dance, stay out late, and anger their mothers. A series of barely-there scenes flit by: one sees the girls shivering in a cold bath together shrinking their new jeans (in a bit of loving detail so specific it hits with the weight of lived experience), another finds them hitching a joyride with two older boys harboring lusty intentions, only to jump from the car and run away from their confused suitors, giggling. The restless perpetual motion of the camerawork (DP Robbie Ryan turns in work here recalling the expressiveness of the opening of Lance Hammer‚Äôs Ballast, the Dardennes at their fleetest, and his own shooting on Andrea Arnold‚Äôs Fish Tank and Wuthering Heights), coupled with sharp edits chopping off vignettes in unexpected places, provides a sustaining jolt that gives off the feel of adolescence, or at least how the movies have decided to represent the same to us. Even if it‚Äôs occasionally too familiar, it‚Äôs still some of the most intuitive, from-the-hip filmmaking of Potter‚Äôs career.

The story gradually broadens to include Ginger‚Äôs parents, Roland (Alessandro Nivola) and Natalie (Christina Hendricks). Both are leftists, but now, years past their university days and ideals, they are engaged in an ongoing marital power struggle over just how anarchic one can continue to be in the face of real-life necessity. As frustrated as Natalie seems with her daughter‚Äôs obsession with Rosa, whom she considers an oversexed, undersupervised bad influence, she‚Äôs even more exhausted by the caddish Roland, who reeks of condescension and a hunger for id satisfaction that finds a ready outlet in his susceptible university students. For her part, Ginger clearly idolizes her father for his philosophizing ways and despises her mother‚Äôs compromises. Extreme positions (both right and left) never find so willing an audience as the young and half-formed, and as Ginger‚Äôs lingering obsession with and fear of atomic destruction grows, exacerbated by the Cuban Missile Crisis, she turns to anti-bomb activism, though likely more to win her father‚Äôs approval than to stave off world annihilation.

Roland‚Äôs eyes have been directed elsewhere for most of the film, however. Early, as Roland drives Rosa home late one evening, careering dangerously through a tunnel to provide the girls a cheap thrill, a quick shot catches him eyeing Rosa in the rearview, and his meaningful glance is returned in kind. This unsubtle cinematic signaling is paid off when the much older man takes up with his daughter‚Äôs best friend on a sailing trip seemingly designed expressly for her seduction. Ginger‚Äôs sense of betrayal (she can hear their lovemaking from the next cabin) forces her to question her father‚Äôs libertine, anything-goes politics. One could, as Roland clearly does, rationally arrive at the conclusion that the only thing preventing a union between a man in his forties and his teenaged daughter‚Äôs best friend are mores and conditions set in place by a fundamentally unfair set of codes inextricably linked to oppressiveness around class, race, gender, etc., but the pair‚Äôs intimacy feels just instinctively wrong to Ginger. And how can she continue to take her father‚Äôs politics seriously when his hypocrisy is constantly revealing itself? When Roland invites Rosa to move in with him in the apartment he shares with a few friends and Ginger (who vacated her mother‚Äôs flat in a fit of pique), it‚Äôs tellingly still the girls that must serve the man dinner.

As the film settles into this odd triangle, it becomes clear that what Potter‚Äôs interested in is less the capturing of a tactile experience of girlhood than how Ginger‚Äôs own girlhood is twisted by her collisions with the various strands of the era‚Äôs leftism. She‚Äôs at different points influenced by her father‚Äôs extreme ideals; milder family friends (played by Timothy Spall and Oliver Platt), who in turn introduce her to May Bella (Annette Bening), fashionable, worldly, and in from New York; a cute boy who leads increasingly strident and dangerous antiwar rallies; and, finally, her mother‚Äôs weary pragmatism. It feels at times as though every character is less a living, breathing human being than a representation of a place on the political spectrum, and as the film wears on, Ginger and Rosa trudges toward the didactic. Potter‚Äôs climax, which brings all the film‚Äôs characters to Natalie‚Äôs apartment for the revelation of Roland‚Äôs relationship to Rosa, features plenty of grand acting (notably from Fanning), but feels stagy in comparison with the film‚Äôs nimble earlier sequences.

Ginger and Rosa will likely provide fodder for those who seek evidence of autobiography within any work loosely defined as coming-of-age. It‚Äôs not hard to draw it out here: Potter‚Äôs politics are similar to those espoused by the film‚Äôs characters‚ÄĒher father was an anarchist, she was a teenager in the same era as Ginger and shares her shock of orange hair. Yet, with a filmmaker so obsessed with the arrangement of formal elements, one could easily argue all of her disparate films are personal in that each specifically addresses a problem or aesthetic obsession its creator held at the time of its making; why prioritize the relationship between the ‚Äúpersonal‚ÄĚ and biographical when her various experiments in form perhaps speak more directly to something fundamental in her nature? Her aggressively off putting green-screen cell-phone film Rage is no less a reflection of the makeup of ‚ÄúSally Potter‚ÄĚ than Yes or Thriller or Ginger and Rosa. This endless curiosity around the moving image is what makes her fascinating, even if the films themselves aren‚Äôt always as compelling and eloquent as their maker. Ginger and Rosa is no exception. In its best and freest moments it excels at capturing the rhythm of youth, but its narrative dissection of the era‚Äôs politics is far less fleet of foot.