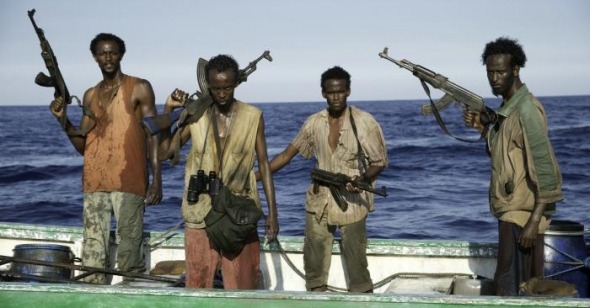 Lost at Sea
By Elbert Ventura

Handmaiden of the hegemon or stealth critic of the same? There is evidence for each side in the case against Paul Greengrass. In less than a decade, the British-born director has emerged as the most avid chronicler of our national traumas (though Kathryn Bigelow might quibble with that claim). If United 93 was a context-free, “never forget” thrill ride, The Bourne Ultimatum offered the blowback corrective, a critique later deepened and made explicit by the ham-handed, Baghdad-set Green Zone. Captain Phillips, Greengrass’s latest, has already been derided by some as pro-military propaganda —and hailed by others as a complex interrogation of power and powerlessness. That such opposed responses can be read in the same film is less a sign of its richness than of Greengrass’s talent for making lack of commitment—even intellectual incoherence—look like artful ambiguity.

Captain Phillips marks a return to ripped-from-the-headlines territory for Greengrass, but its scenario is conspicuously smaller in scale. The attacks on 9/11, the war on terror, and Iraq (the subjects of his most recent films) give way to the comparatively minor real-life drama of the 2009 hijacking of the Maersk Alabama by pirates. The ordeal off the Somali coast was followed by the world in real time, ending four days after it started with the killing of three of the pirates, the arrest of a fourth, and the rescue of the kidnapped Captain Richard Phillips. The real heroes of the story were the members of SEAL Team Six, who would go on to greater fame a couple of years later on an even more important mission.

But the hero as the world remembers it, and as now consecrated by Hollywood, was the titular captain. Richard Phillips was detained by the four hijackers after their failed attempt to commandeer the Alabama. They held the captain in captivity on the ship’s lifeboat in the hopes of securing a ransom. Played by Tom Hanks, Phillips is hardly an action-figure type. Save for a late escape attempt by jumping into dark waters (only to be fished out again by the pirates), he comes across as a stolid professional, less interested in playing hero than in getting himself and his crew home safely. With the exception of an overripe New England accent, Hanks’s performance is typically strong if unspectacular—though he does get his Oscar moment in a remarkable scene showing the captain, fresh from his rescue, breaking down during a physical exam as the adrenaline wears off and the shock sets in.

Phillips’s trauma isn’t just his own—it’s America’s, too. Early in the movie, Greengrass festoons the proceedings with its grand theme: “It seems like the world is moving so fast,” says Phillips on his way to the airport. Phillips’s declaration is the subterranean concern that courses throughout Greengrass’s movies. If interconnectedness is the great subject of 21st-century cinema, Greengrass traffics in the myriad dangers that spring from it. Jihadi hijackers waltzing onto commercial flights; a sprawling surveillance apparatus made possible by globalizing technologies; gaunt pirates from distant lands whose shores we now routinely touch—through all this, the globe-trotting director has had one message for Americans: it’s a dangerous world out there.

In Captain Phillips, the Maersk Alabama is a floating metaphor for America in this new century: big, lumbering, unable to change course easily, vulnerable to asymmetric threats. But it is still the most dominant power in the planet. That fact makes this a strange kind of thriller. On a moment-to-moment basis, Greengrass can generate suspense. Leaning heavily on Henry Jackman’s pounding score, he jangles nerves (and eyes) with his now-trademark shaky cam and darting zooms. It’s a monotonous aesthetic: right from the get-go, the movie sets us on edge with a handheld depiction of . . . Captain Phillips getting ready for his trip in his Vermont home. The kinetic immersiveness also hides an essential flaw. At the heart of Captain Phillips is a glaring mismatch: the world’s greatest military power versus four hapless pirates from a dirt-poor country. In this regard, Greengrass inverts what made The Bourne Ultimatum so satisfying. In Bourne, he created a hero who could outwit and defeat a high-tech hydra; in Captain Phillips, it’s the people in the control room we root for. Not to diminish Phillips’s ordeal—it is harrowing—but the image of three hulking U.S. ships, a surveillance drone, a Navy Seal team, and the best technology our defense budget can buy arrayed against a dinky lifeboat is darkly, unintentionally hilarious.

A verité impressionist drawn to the gleam of technology and the buzz of the op center, Greengrass inevitably ends up fetishizing military might. The climactic set piece hums not because of the suspense of the standoff—we know the pirates will be squashed like bugs—but from the admiring depiction of Special Ops ballsiness and precision. (There won’t be a better “America, fuck yeah!” moment this year than the nighttime parachute drop of the Navy SEAL team over Somali waters.) Greengrass tries his best to contextualize, taking pains to depict the Somalis (played by four non-professionals, led by the impressive Barkhad Abdi) as sympathetic wretches, a warlord’s pawns driven by desperation. But the film is simply less interested in their story than in the mission to take them down.

Captain Phillips is, after all, an action movie first and foremost. And Greengrass’s priority, as has become clear with each new film, is to deliver the goods. Deliver he does: J. Hoberman once made a case for Greengrass as the “best action director working today,” and it’s a defensible claim. But if he’s in the business of entertainment, what’s he doing mining real-life, traumatic events for material? The question that was asked again and again after United 93 came out (even among supporters) —Why was this made? —echoes at the end here as well.

Does Greengrass even wonder if there’s something problematic about using the tragedies of real people—remember, he sold United 93 as a heavily researched reconstruction of the actual event—as mere fodder for the multiplex? In a recent interview on FilmLinc Daily, Greengrass used the word “excite” and its variations nine times to describe what he’s up to in Captain Phillips. In another interview with the New York Times, he noted that the “culture thirsts for authenticity.” But authenticity and entertainment are often at odds. And thus we get Captain Phillips: what could have been a richer, more complicated moral tale has been flattened into a cat-and-mouse, hostage saga. And what could have been a more compelling and jagged character has been sanctified into a stoic everyman. Lurking in the shadows of the movie’s release is a multimillion-dollar lawsuit against Maersk, with several crew members alleging that it was Phillips’s recklessness—his refusal to heed a maritime warning not to steer so close to the Somali coast—that led to their predicament. Yet, in the film, there is not a hint that Phillips could have been negligent. Greengrass, self-proclaimed champion of authenticity, prints the legend.

Purporting to make realistic and austere films, Greengrass wanders into a gray zone where questions about the morality of representation and the responsibility of the artist are not acknowledged. For a filmmaker dabbling in recent history, it’s a serious problem. Captain Phillips is made with considerable skill, but without much wisdom. That inability to widen the lens, to move beyond the merely immediate experience, is how a filmmaker like Greengrass can make movies that are both expertly assembled and yet clueless about what they’re saying at the same time.