Night Across the Street 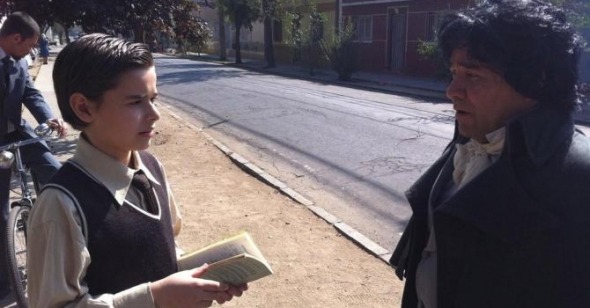 Raúl Ruiz wanted us to listen. Once or twice a year the venerable Chilean filmmaker would beckon us close, sit us down, and spin a story that might spiral on for hours, taking in hundreds of years and dozens of characters. Sometimes he’d prepare an exquisite magic act, daring us to marvel even at those tricks whose secrets lay in plain view. His films felt like extensions of his personality, excuses for him to ramble on, gesticulate, deceive, play jokes. In Night Across the Street, his final film, he threw off the pretense (though not all the tricks), and invited us to see his stories in the making.

Like Ruiz’s previous film, Mysteries of Lisbon, they’re not technically his: Night Across the Street is stitched together from a handful of tales by the Chilean author Hernán del Solar. As if to indicate just how much time he spent in made-up worlds, or maybe just for the sake of pulling off yet another act of sleight-of-hand, Ruiz gives us his autobiography in the form of an adaptation. He chooses as his alter ego the aging office clerk Don Celso (played by Sergio Hernández), taking on as his own the Don’s gallery of memories and fantasies, dreams and meditations. A young Celso goes to the movies with Beethoven, gets in arguments with Long John Silver, and takes his dinner in a chicken coop. An aging Celso plays with marbles on the beach, and bears witness to a florid tale of murder and greed. It’s not quite stream-of-consciousness—streams flow one way, and Night Across the Street delights in nothing more than doubling, even quadrupling, back on itself. It’s closer, maybe, to the breath of consciousness: we watch our hero absorbing names, dates, sensations, faces, and stories, exhaling it all for our consumption, and taking in still more.

The resulting film is built like one of Don Celso’s homemade impossible bottles, each home to an intact, miniature clipper ship far too large to fit through its slender neck. It might be Ruiz’s greatest magic trick that he managed to cram a seventy-year life into just under two light, ambling hours, all without losing his eye for detail. When in the presence of a young admirer the Don runs his hand gently over his collection of dusty bottles, it’s tough for us not to imagine Ruiz himself, glancing back at his many, many films—and marveling himself that each one could feel at once so expansive and so contained.

Like Mysteries of Lisbon, Night Across the Street is about the act of storytelling; unlike in Mysteries, both a gripping yarn and a meta-exercise, Night’s various digressions, puns and motifs never coalesce into a single narrative, or even several. To even speak of coalescence is already to come at Night from the perspective of a listener waiting on a tale; Ruiz, it seems, wants instead to invite us into the mind of the teller. Midway through the film, Don Celso describes a ramble he took in the country to “collect words.” As the Don lists off his finds (his favorite—“Rhododendron”—will echo through the film like a recurring punchline), we’re encouraged to appreciate each word not as a conduit for meaning, but for its own sake—for its sonic texture, the way it rolls off the tongue. So it goes with Night Across the Street, which challenges us to luxuriate in Ruiz’s colorful vignettes without worrying about how they might fit into some larger schema. This is storytelling in its youngest form, though perhaps not its most streamlined: a mess of associations yet to be shaped into any recognizable order. It’s the product of an imagination at play.

Games abound in Night Across the Street: word games and games of chance, boyhood mock-sparring and grown-up bouts of dominoes. Early on in the film, one character compares time to a bag of marbles. The Ruiz of Night Across the Street belongs to that class of aging filmmaker-sages who’ve come to see life—and, by extension, death—as something to be played with, mischievously, bemusedly, and with more than a little detachment. Somehow, though, Ruiz maintains his affection for those things in which he once might have looked solemnly for meaning—and for those people who continue to look.

Ruiz comes off as desperately fond of his childhood self, the kid who prides himself in knowing both of the dates conflicting scholars assign to the founding of Santiago. He’s fond, too, of all the participants in the impeccably mannered melodrama that recurs throughout Night’s second half like a persistent joke—for the silliness of their sober gazes and the misplaced gravity of their airs. We start to feel as if Ruiz is intent on turning nearly every aspect of human experience—love and desire, youth and old age, memory and the passage of time—into one big game. But if he is in fact lowering life’s stakes one scene at a time, it’s out of neither apathy, nor resentment, but simply out of determination that nothing, not failure, not betrayal, and not even death, compromise his delight in the places, objects, sounds, and people of his past.

If Night Across the Street ever takes on any real gravity (a word Ruiz likely would’ve hated), it’s because its maker’s jocularity in the face of death seems to extend from his profound love of life. The slow, steady breaths that Don Celso takes near film’s end, and which young Celso imitates as if in solidarity with his future self, speak to an affection for life that’s unconditional, unyielding, and completely undemanding. They express above all Ruiz’s desire to internalize all that lies outside himself, to swallow the world whole.

“Why do you go to the movies if you can’t understand everything you’ve just seen?” Beethoven asks our young hero just before their ill-fated visit to the cinema. “We came to have fun,” he replies. Ruiz, at the very least, is having fun: having waiters spontaneously enter opulent offices to carry off a bust or two, toying with nondiegetic sound effects so that Don’s impossible bottles seem actually to emit the sound of crashing waves, having one character receive what might be the goofiest going-away present in modern cinema, making a lit-up city resemble a star-studded night sky. The movies were Ruiz’s magic kit, podium, and playpen in one, and sometimes Night Across the Street feels like one big excuse for Ruiz to try out his favorite tricks all over again—as eloquently and as mischievously as ever.