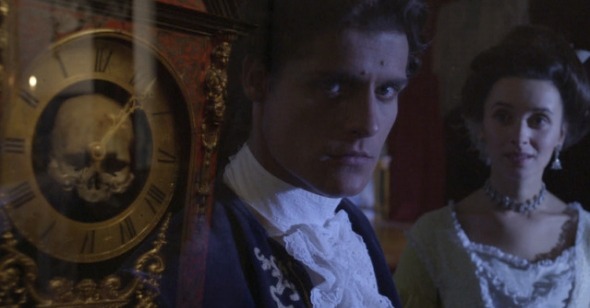 Tell Me a Story
By Michael Koresky

Thanks to his towering 1999 adaptation Time Regained (a film that seems more and more like a mirage the further away we get from it), the Chilean-born Ra√ļl Ruiz is one of the few filmmakers whose work truly earns the term Proustian. He has the perfect artistic temperament for the kind of epically layered filmmaking necessitated by his latest project: a film version of Camilo Castelo Branco‚Äôs 1852 novel The Mysteries of Lisbon, a beloved Borgesian classic of Portuguese literature little known to English-language readers. His tendency toward the baroque is tempered by a literate approach to character and a stately aesthetic. This is not the sort of film that one would normally call ‚Äúfun,‚ÄĚ but the 69-year-old Ruiz, who has stated that the film might be his last, seems to be having a ball. From the first strings of the swoony, old-fashioned score by veteran composer Jorge Arriagada over the opening credits, it‚Äôs clear that Ruiz wishes to envelop the viewer in lush, traditional storytelling; this being wily Ruiz, though, Mysteries of Lisbon foregrounds that storytelling to a nearly absurd degree.

The nun who was a countess. The priest who was a soldier. The nobleman who was a thief. The poet who was a bastard. Ruiz‚Äôs Mysteries of Lisbon is a costume drama in more ways than one. Within the four and a half hours of this mammoth adaptation, characters of different classes and bearings will change titles, outfits, and even faces in an ever-evolving and growing tapestry‚ÄĒa teeming, swarming hive made up of just a handful of interconnected people, both poor and noble. But despite all the shifting identities this is not tale of trickery or deception‚ÄĒrather these are the vicissitudes of life, on high and down below, and Ruiz‚Äôs film paints on a large enough canvas to capture it all, in vivid, telling detail.

Though it may seem daunting, the size of the film is its chief pleasure. There‚Äôs so much room to parry and maneuver, so many doors (some literal) to unlock, secrets and coincidences to be in thrall to. The story itself‚ÄĒinitially concerning, Joao, a young boy living in an orphanage reunited with his mother by his priest caretaker and then spiraling out to encompass a grand and seemingly ever expanding cast of tight-knit characters‚ÄĒis one of immense contrivance, and Ruiz acknowledges and plays with that inescapable fact, constantly ‚Äúsetting the scene‚ÄĚ with winking theatrical grandeur. Anecdotes lead to flashbacks, tales within tales are teasingly halted, only to be concluded later, like bedtime stories finished in the harsh light of morning. Yet Ruiz‚Äôs trail of breadcrumbs is always visible. For as convoluted as Mysteries of Lisbon becomes‚ÄĒand that is hardly a negative value judgment‚ÄĒit is never without its essential clarity of vision (up to and including its simultaneously crystallizing and ambiguous conclusion) and Dickensian joy of narrative.

When we meet Joao, the Peninsular War has broken out: he is fourteen, teased at boarding school for being a bastard child (as was Branco in reality), and rumored to be the son of a horse thief, but looked after with immense, fatherly affection by the warm Father Dinis (Adriano Luz). In the first half of the film, Dinis plays something of an all-powerful peacekeeper, for Joao‚Äôs estranged, dispersed family, but also for tangential characters whose tendrils to one another we only slowly come to ascertain.

For the first hour at least, Mysteries of Lisbon seems like a simple tale of maternal reconciliation: all of Father Dinis‚Äôs machinations are done to bring together Joao and his mother, Angela (Maria Joao Bastos), living in a nearby mansion under the domination of her husband, a count who shows more affection for the maid than for his wife. The story of Angela‚Äôs marriage and ‚Äúbitter life‚ÄĚ up to this point, as told by Dinis to Joao, is the film‚Äôs launch into its epic whirlwind of tragic loves, betrayals, secrets, and multiple identities. Denied her illicit true love (Joao‚Äôs penniless papa) by a domineering Marquis father, Angela was forced into marrying the cruel count; do Dinis‚Äôs efforts to shield her from harm and clear up the hidden truths about Joao‚Äôs childhood reflect simply the boundless compassion of a man of God, or does he have a bigger stake in the family history? This apparently benevolent character has his own skeletons in the closet (literally, in one case, in a wittily gothic touch), and the confessional purity he comes to embody for most of the yarn‚Äôs characters (many of the tales told in the film are relayed directly to him) is cleverly undermined one grand movement after another.

Ruiz is especially good at making the classical eccentric; everything is just slightly askew but linear enough so that the many narrative rabbit holes never swallow up the characters or audience. Moving on from the sagas of Angela and Joao, of the Count and Father Dinis, Ruiz fluidly jumps to seemingly tangential (but, as it turns out, perhaps even more central) tales, past and present, of such colorful personages as Heliodoro (also known as ‚ÄúKnife-Eater‚ÄĚ), the Marquis‚Äôs hit man of sorts; Dinis‚Äôs once loyal friend Alvaro de Albuquerque and his obsession, the Countess Silvinia (played by Catarina Wallenstein of Eccentricites of a Blonde-Hair Girl); the darkly handsome Brazilian nobleman of mystery, Alberto (Ricardo Pereira) who arrives in Lisbon allegedly having made a fortune in the slave trade; Madame Cliton (Regular Lovers‚Äô sublime Clotilde Hesme), a haughty French seductress and potentially vengeful former flame of Alberto‚Äôs; Ernesto Lacroze (Melvil Poupaud), the soldier of Napoleon whose rescue during battle instigates a valuable friendship with and eventual betrayal of one of the story‚Äôs main characters; and the eventually teenaged Joao‚Äôs friend, the Viscount Armagnac (Malik Zidi), whose enigmatic behavior towards his companion drives the narrative toward its rich, solitary ending.

These people come in and out of the gloomy recesses of Ruiz‚Äôs meticulously crafted chronicle with such lack of ostentation that they often seem like wraiths (intimated explicitly early on when we first glimpse Angela appearing only for a vaporous moment at Joao‚Äôs beside when he‚Äôs sick‚ÄĒan image that will return to haunt the film). There‚Äôs a stately composure to the director‚Äôs storytelling (and a decidedly non-eroticized quality despite the luxurious surroundings and physical beauty on display) that lends it the air of a ghost story, or at least a shadow puppet show: many sequences are framed by young Joao‚Äôs small toy stage, populated by paper cut-outs of the film‚Äôs characters, lending the film the quality of imaginative child‚Äôs play, even amidst such adult treacheries. The positioning of the grandiloquent tale as self-conscious theater is not merely a mannerism on Ruiz‚Äôs part, but a savvy way of getting around the narrative‚Äôs coincidences and twists of identity‚ÄĒlet‚Äôs face it, the sorts of disguises and reveals detailed here would undoubtedly register more convincingly on the page. Translating this whopper to the screen requires a crafty sense of humor‚ÄĒthe possibility of distancing the viewer from the action onscreen through such devices is a very real threat, but Ruiz‚Äôs consummate earnestness is the connective tissue.

This is borne out in the voluptuous cinematography by Andr√© Szankowski, which enhances Lisbon‚Äôs essentially expository nature with breathtaking 360-degree room pans, a handful of magnificently cockeyed compositions, and the occasional use of a plane-dissolving split-focus diopter. Despite the sumptuousness of these techniques, Ruiz maintains decorum throughout, saving his clearest metaphysical gambit for the end: there‚Äôs a final melancholy enchantment that feels lifted right out of his Time Regained, but which doesn‚Äôt seem like an addendum and which remarkably reasserts Ruiz‚Äôs authorship over this potentially unwieldy titanic tome. Whether we‚Äôre seeing a death or a regeneration, a dream or a remembrance, the final images of Mysteries of Lisbon, filtered through an amber haze of memory, unites all of the film‚Äôs disparate strands in one delirious, cinematic consciousness.