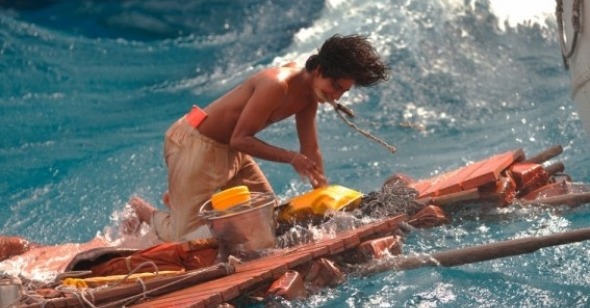 A story about the human need to believe in some higher power, Ang Lee’s Life of Pi will restore your faith—in CGI. Lee has fashioned something like a three-dimensional children’s picture-book version of Yann Martel’s beloved 2001 best-seller and Man Booker Prize winner that’s as visually dazzling as it is theologically simplistic. Lee overloads the screen with fancifully supersaturated colors and an endless array of shimmering transitional effects that dissolve boundaries between scenes. At its pandering worst, the film’s aesthetic can seem right out of the latter-day Tim Burton playbook; occasionally, however, Lee and the team of studio craftsman behind him create images of breathtaking digital elasticity with enough dreamy grandeur to compensate for the film’s meager, meandering spirituality. Some may find the emphatic special-effects-driven nature of Life of Pi simply gaudy and jejune, a cheapjack way of instilling awe in the viewer for a film that takes awe as its explicit subject; by boiling down Martel’s fable-like meditation on the act of storytelling to a childish essence, however, Lee has made something less concerned with the metaphysical than vividly contemplative about the power of cinematic imagemaking.

The flamboyant color palette and liquid camerawork help justify the film as above all a fairy tale, which early on gives Lee free reign to indulge in a self-aware exoticism. This is clear from the opening credit sequence, which feels like a cinematic version of one of those blocky board books for babies, designed for prime 3D show-off purposes, with the reach-out-and-touch-them textures of the flamingos, wild boars, toucans, and zebras. In the film’s first half hour or so, Lee treats the film’s characters (young Pi and his parents, the owners of a zoo) and setting (the French-colonial Indian territory of Pondicherry) with the same saucer-eyed enchantment. The film is framed as a story-within-a-story, told by an adult Pi (Irrfan Khan) narrated to a passive listener (Rafe Spall) interested in turning it into a book, a clunky device that ultimately allows screenwriter David Magee to underline and explain the film’s themes a dozen times over. We are thus meant to see this version of India through an unnecessary white, western surrogate’s eyes, to watch the story as it’s unfolding in his mind; this is a common Hollywood narrative device, but here it creates a problematic distance between us and the main character’s experiences. The conceit of the film is that Pi (short for Piscine) has a story that will make this listener—and us, by extension—“believe in God.” Thus Lee and Magee stack the deck early on: Pi’s story better be one hell of a yarn, and the film’s representation of it needs to enchant and envelop the viewer. And it succeeds—thrillingly—as cinema, if not so much as a serious-minded reflection on what makes us want to believe in something we cannot see. After all, in a movie as generic as this one, what we see is what we get.

Pi’s multi-denominational path-seeking as a teenager (played by Suraj Sharma in an impressively invested emotional performance) brings him from Hinduism to Christianity to Islam, none taking dominance in his mind as the one true faith. His science-minded, secular parents advise against his search (his father warns that “Religion is darkness”) yet do not hold him back from his devout journey for spiritual guidance. The only lesson his father gives is that nature is bloody chaos and that animals are soulless; he dramatizes this in a Darwinian episode in which he serves up a goat to his latest zoo acquisition, a gorgeous Bengal tiger, named Richard Parker due to a clerical error. Pi’s journey from Krishna to Christ to Allah is set up as prelude to an epic test of his faith that is the meat of the film: after the ship carrying the family and their animals to Canada is struck by a deadly storm, sole survivor Pi is stranded on a lifeboat in the middle of the ocean, his only companions an orangutan, a hyena, and, much to his terror, Richard Parker.

Even with the aid of best-that-money-can-buy computerized movie magic, Life of Pi was destined to be something of a tightrope walk, both because of its largely one-setting story and the savvy deployment of effects it would require to realize it. In these terms, Lee pulls it off, lending admittedly superficial weight to Martel’s spiritually curious allegory. For every 3-D-flaunting gimmick (yes, that’s tiger pee spraying in your face) there’s another genuinely sublime digital composition: like Richard Parker, the ocean is both enemy and nurturer, and the greatest imagery in the film is its vast expanse of water. Though the film was shot mostly in a water tank, cinematographer Claudio Miranda (whose staggeringly beautiful work on The Curious Case of Benjamin Button, lit like Magritte’s “Empire of Light” series, is a benchmark of the digital takeover) grants every scene set on the waves a voluminous beauty. A shot of Pi drifting like a discarded rag doll under the water while the enormous shipwreck floats above him in the distance like a leviathan nearly captures some of the ethereal momentousness of the unparalleled submerged Coney Island scenes in A.I.; later, when the camera looks down at Pi’s boat from a great height, the entirety of the surrounding ocean a pristine mirror reflecting the azure sky, the film feels momentarily persuasive in its aim, which ultimately is to make us, like the character of the listener, a believer.

However, a religious-minded film can only be truly persuasive to the nonbeliever if it communicates the fervor of the artist behind it—in other words, we don’t have to believe, but we have to believe that the filmmaker believes. Martin Scorsese pulled this off with The Last Temptation of Christ, for example, similarly intimating that the borders of faith are dictated by the powers of storytelling. A for-hire project made by an often technically assured but impersonal director, Life of Pi necessarily and unavoidably lacks such passion. And for a film whose final twist is meant to throw everything we’ve seen in a new light by questioning its own reality, Life of Pi ultimately lacks the appropriate amount of ambiguity it needs to make the viewer significantly wrestle with his or her preconceived notions of faith. Rather than open up a dialogue, Life of Pi proselytizes, bludgeons with a mysticism more cinematic than organic.