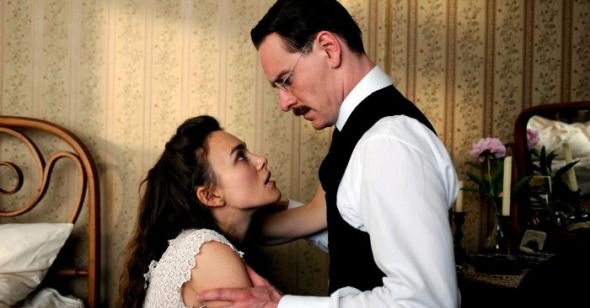 In the Q&A following the New York Film Festival press screening of A Dangerous Method, David Cronenberg admitted to never having sat on an analyst‚Äôs couch. If the aim of psychoanalysis, however, is not to cure people of their neuroses, but to make them more comfortable with them, one could understand Cronenberg‚Äôs career as its own talking cure: since his first film, the 1966 short Transfer, about a psychiatrist and his patient, he‚Äôs pushed audiences up to the human body to stare down its grotesque horrors, past the point of revulsion until we‚Äôve arrived, through catastrophe or attenuation, at a new, often fleshy, normal. While there are no improvised orifices here, A Dangerous Method explores the cavities of the human interior all the same, those dark impulses that, as with his most recent ‚Äúclassical‚Äù films, A History of Violence and Eastern Promises, erupt messily onto the placid surface of everyday civility.

Though the director has frequently adapted literary sources for his films, here he‚Äôs more rigidly bound by historical record, which was meticulously documented in the letters that circulated between the founders of modern psychiatry: Sigmund Freud, Carl Jung, and the Russian psychoanalyst Sabina Spielrein, who, as a closing title card notes, was given no more credit to the history of the field than a footnote in Freud‚Äôs Beyond the Pleasure Principle. The script, adapted by Christopher Hampton from his play, The Talking Cure (itself based on John Kerr‚Äôs novel A Most Dangerous Method), directly quotes many of the words these figures exchanged in the early decades of the twentieth century, during which time Jung (Michael Fassbender) formed and deformed relationships with Spielrein (Keira Knightley), first his patient, then his student and presumably his lover, and with Freud (Viggo Mortensen), though their mentorship ended in an inevitable Oedipal split.

Throughout the film, the stiff, upper-middle class decorum of Jung‚Äôs milieu, funded by his wife, Emma (Sarah Gadon), is often upended, though perhaps not in the way a Cronenberg audience would expect. Upon their first meeting, Jung delights Freud with his appetite, not for the piles of fin-de-si√®cle meatloaf he ladles onto his plate, but for his enthusiastic frankness in discussing sex at the dinner table. ‚ÄúPlease don‚Äôt feel you have to restrain yourself,‚Äù Freud says archly, and the shot cuts from Jung‚Äôs third and fourth servings to a long view of the Freud brood staring dully at their Swiss guest. Words, and the ideas they impart, are what comprise the film‚Äôs titular danger; their theories are as powerful as ‚Äúthe plague,‚Äù as Freud dryly refers to them, and in addition to the dynamic effect they have in bringing together these three figures, they also dominated scientific and academic inquiry over the next century. Jung‚Äôs use of Freud‚Äôs then-radical talking cure restores speech to the hysterical Spielrein, whom we first see gnashing at the window of a horse-drawn carriage; her eloquent letters, in turn, precipitate the professional break between the men, though to be fair, the film shows the rift between Freud‚Äôs preoccupation with sex and Jung‚Äôs yearning for transcendence as having been already opened.

For a Cronenberg film, there‚Äôs very little violence, save a few vigorous spankings, but it would be a mistake to call A Dangerous Method bloodless. The film is shot in crisp detail, with handsome period pieces, women in white, high-collared dresses, and genteel garden strolls, but its apparent restraint is belied by the potency of the ideas the three main characters discuss as they analyze each other‚Äôs dreams and attempt to give language to the unspeakable. Fittingly, Cronenberg‚Äôs fixation is oral: the camera centers on Knightley‚Äôs distorted mouth as she sputters a confession of forbidden desires, her jaw seeming to detach from the force of the words she spews. As Spielrein heaves and clutches her chair, and Jung sits attentively behind her, the camera‚Äôs focus bends around her cheek, soft on one side and sharp on the other, as if this moment, and the taut bind between analyst and patient, is the ‚Äúhinge of the universe‚Äù that Jung describes in a later instance. This, indeed, is the crux of the film: the gulf between the unutterable impulses of the body and the words we invent, if not to tame them, then to better know their secrets.

Hampton‚Äôs original scenario focused on Spielrein, and though the film emphasizes the intrigue surrounding the figures of Jung and Freud, Cronenberg crafts in her a complex, brilliant, and damaged woman in the vein of his most memorable heroes. Knightley‚Äôs transformation from frightened, feral girl to accomplished doctor is extraordinary, and, despite her questionable Russian accent, she gives an effectively feverish performance, leaving enough traces of the hysteric to animate the woman she becomes. Spielrein is, as Jung describes, a ‚Äúcatalyst‚Äù for much of what happens in his life, and while she‚Äôs most intimately involved with Jung, her similarities with Freud show the close interconnectedness among the three. Her ideas on sex, which focus on the desire to lose oneself in the other, adhere most closely to Freud, and like him she‚Äôs Jewish and comes from relatively modest means. The handsome, broad-shouldered Jung, meanwhile, is the rare Gentile in the field, wealthy, and, for Spielrein, a vision of Wagner‚Äôs Teutonic hero, Siegfried. His theories of telepathy and ‚Äúa catalytic exteriorization phenomenon‚Äù‚Äîthe mind‚Äôs ability to manifest physical change‚Äîare met by Freud with puzzlement and later, when he realizes he can‚Äôt sway his young colleague‚Äôs determination, grim disappointment.

Though Fassbender, as Jung, commands the screen with remarkable poise (and looks exceedingly good wielding a whip), it‚Äôs clear that Cronenberg‚Äôs sympathies lie with Freud. Mortensen plays the aging patriarch with alternating bitterness and bemusement, as he alone, it seems, is concerned with the shape the field might take, for better or for worse. Outside of the central trio, meanwhile, the supporting characters aren‚Äôt given much depth: Emma Jung, despite apparently formidable intellectual capabilities in her own right‚Äîshe too eventually became a psychoanalyst‚Äîis mostly seen pouting and pregnant, and, when a baby appears in the lap of a wet nurse, she apologizes for its female gender. The bohemian and cocaine-addicted Otto Gross (Vincent Cassel), another Freud acolyte, is a caricature of Dionysian frenzy who counsels Jung to give in to his desire for Spielrein. With Gross proudly declaring he represses nothing, Cronenberg drives the point home by showing, needlessly, Gross‚Äôs room full of nude drawings, a bump of blow, and a quickie with a nurse before he escapes over the sanatorium wall. If nothing else, at least, the clownish Gross causes Jung to crack his only smile.

A Dangerous Method has its share of clunky moments, and like most works that tackle intellectual history, its treatment of early psychoanalytic research can feel abbreviated and awkward. Freud, Jung, and Spielrein sometimes say too much, veering into exposition that detracts from the film‚Äôs otherwise nuanced balance of revelation and repression. In speaking to Spielrein, for example, Freud states outright his thoughts on the connection between sex and death, certainly a crucial notion for Cronenberg, but nothing that isn‚Äôt already implied by the film‚Äôs tumultuous events. Other times the clinical vocabulary fits with narrative efficacy, as when Spielrein, shakily assisting Jung in operating an exquisite mechanical polygraph, astutely diagnoses the marital anxieties of his wife, and demonstrates, for the first time, that she might understand his circumstances better than he.

For the most part, Spielrein and Jung‚Äôs romantic relationship doesn‚Äôt fetter the film, and it‚Äôs appropriately folded into the clinical and intellectual discoveries the pair make with each other as they uncover the source of Spielrein‚Äôs disturbance. Together they explore the depths of her masochistic desires and later, her theories on the creative and destructive forces involved in sex, ideas that anticipate some of Jung and Freud‚Äôs most influential work. The pair is granted surprisingly few love scenes‚Äîmost of the heat between them ignites in therapy‚Äîbut they share the film‚Äôs most graceful image, when, drifting aboard Jung‚Äôs red-sailed skiff, they lie together in its hold. Years later, Jung admits to Spielrein, ‚ÄúSometimes you have to do unspeakable things just to go on living.‚Äù The line, hinting at the sacrifices Jung didn‚Äôt make in order to be with Spielrein, seems out of place, small, and even sentimental. But its reference to the unspeakable also recalls the insights offered by psychoanalysis, treating what we hide or bury not as shameful aberration but necessary ways of dealing with intolerable situations. A Dangerous Method, after all, takes places on the eve of the First World War, and Jung‚Äôs got a dream he can‚Äôt shake. He describes to Spielrein a scene of catastrophe, a sea of corpses, ‚Äúthe blood of Europe.‚Äù She asks him what he thinks it means. ‚ÄúI‚Äôve no idea,‚Äù Jung says, ‚Äúunless it‚Äôs about to happen.‚Äù