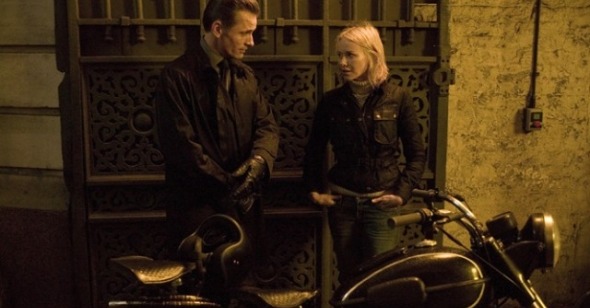 Good artists don‚Äôt deserve excuses when they fail, but explanations. Ignoring or dismissing a film‚Äôs manifold flaws‚ÄĒor perversely inflating them into virtues‚ÄĒdoes the exact opposite of what is intended: instead of revealing more about the artist‚Äôs work, it merely distorts it, sometimes beyond recognition. An artist‚Äôs flaws are as much a part of the work as his strengths, and to banish that dialectic to the back of the frame is to negate the crucial element of struggle within a film, the problems and challenges‚ÄĒwhether of his own making or otherwise‚ÄĒwhich the filmmaker has to surmount. Auteurism, if it is anything at all, is an active process, not simply a passive ‚Äúexpression‚ÄĚ of a filmmaker‚Äôs sensibilities. To pretend otherwise is to engage in boosterism, not criticism, however synonymous the two have become.

David Cronenberg‚Äôs Eastern Promises is a failed film. And it fails for a reason which many critics consider banal and irrelevant (a good indication of its continuing truth): the script is Bad. Writer Steve Knight is evidently seeking to continue pursuing, after Dirty Pretty Things, unvarnished, gritty authenticity by diligently carpentering together banalities and clich√©s, leaving just enough room at the joints for the film‚Äôs narrative progression to make no sense. Descending into the underworld of London‚Äôs Russian Mafia through the eyes of midwife Anna (Naomi Watts), Knight‚Äôs script breaks down irretrievably as this audience surrogate is increasingly absented from the film. Eastern Promises becomes increasingly focused on Viggo Mortensen‚Äôs mysterious chauffeur Nikolai‚ÄĒwithout, however, banishing Watts from the narrative altogether, thus making her continued presence not only a sign of writerly confusion but also an insult to an actress the caliber of Watts, who has nothing to play except indignation. Such obvious failings, of course, are no obstacle to a certain brand of criticism, which can transmute internal breakdown into some daring defiance of ‚Äútraditional‚ÄĚ narrative cohesion, tactfully ignoring the fact that the script itself is clearly aiming for that cohesion and thoroughly botching it.

Totting up each and every one of the film‚Äôs often dizzying denials of logic would be tiresome; the far more interesting question is how Cronenberg attempts to deal with the (many) problems with which he has been presented. Some of those hurdles, through no fault of his own, prove impossible to clear; some play to Cronenberg‚Äôs own persistent (and often unremarked upon) weaknesses. And some of the gaps in this rickety construction prove marvelously conducive to what he does well‚ÄĒnot merely a repetition of old tropes, but a development and exploration of them. If Eastern Promises is deserving of any praise, it is that it reveals the accomplishment of Cronenberg‚Äôs artistic strategies and personality all the more starkly in light of their coexistence with the most blatant of his faults.

To begin with the latter: Cronenberg continues to demonstrate a clunkiness in simple dialogue scenes, which is truly surprising given the length of his career. Composition, staging and timing descend below the level of journeyman functionalism to laxness and lack of imagination. The numerous domestic scenes between Watts, her mother, and curmudgeonly Russian uncle Stepan (an obnoxious performance of an obnoxious role by Jerzy Skolimowski) stand out particularly: there is no fluidity of dialogue between the actors, nor between the linking shots throughout the scene; the perfunctory nature of the scenes as written is not aided by their perfunctory direction. The impression one continually gets is that a set has been lighted for actors to walk onto, say lines, and depart; the acting and directing process has been unveiled in a way that‚Äôs less ‚Äúdeconstructive‚ÄĚ than simply lazy. Cronenberg has little feel for locations which bespeak a captured sliver of life as it is lived; he‚Äôs far more at home (and effective) in the sterile, insular flesh laboratories which have become his trademark, dissecting tables upon which he can examine human life through the lens of autopsy.

How, then, does Cronenberg attempt to find his way into this atypical material? Through an old fascination of his, the human body (in this case, Mortensen‚Äôs body), but in very new ways, and in intimate concert with Mortensen‚Äôs own craftsmanship. This actor-director collusion is nothing new in Cronenberg‚Äôs oeuvre, of course, his partnership with Jeff Goldblum on The Fly (1986) being the paramount example. But in that film as in nearly all his others, Cronenberg is concerned with the body in decay and mutation, flesh as common inheritance and common vulnerability which binds Goldblum‚Äôs Olympian intelligence to the humanity he isolates himself from.

In Eastern Promises, conversely, with the aid of Mortensen‚Äôs granitic face and body‚ÄĒwhich is not simply a given quality but an acted entity‚ÄĒCronenberg depicts flesh as armour, the shell of a man who lives entirely through his outward gestures. Mortensen‚Äôs impeccable overcoat, suit, gloves, and slicked-back hair are further layers of a constructed identity that begins with the skin, which itself is covered with the tattoos relating the story of his life to his underworld masters. The progressive stripping, both literal and metaphorical, of Nikolai throughout the film reveals not the person beneath the artifice, but the meticulously constructed series of artifices which constitute the person himself. The irony, of course, is that this revelation of ever deeper layers of armouring does leave Nikolai vulnerable, and in the film‚Äôs most brilliant sequence‚ÄĒan attempted assassination of the stark naked Nikolai in a public bath‚ÄĒCronenberg creates not simply an astonishing piece of cinematic choreography, but a fusion of theme, narrative, and performance which can genuinely be called masterly.

It‚Äôs in this scene that the true daring of Mortensen‚Äôs performance is revealed, his character‚Äôs moment of extreme actualization‚ÄĒthe immanent sense of violence and cunning resourcefulness beneath the stoic exterior unleashed in all its brutal intelligence‚ÄĒcoming at his moment of extreme humiliation, caught not merely with his pants down but his balls flapping. Mortensen could have easily descended into preening narcissism or self-parody‚ÄĒat one point the incongruity of his dark-suited, shades-wearing, movie-made slickness against the flat interior lighting of a McDonald‚Äôs is (unintentionally?) hilarious‚ÄĒbut he instead aims for something far more difficult: a making-plain of his own constant awareness of his performance, his thoroughly calculated effects, which paradoxically serves to make his character all the more credible. Tommy Lee Jones‚Äôs brilliant gestural performance in the decidedly unbrilliant Haggis stew In the Valley of Elah is a telling contrast. Where Jones‚Äôs precise movements and expressions speak eloquently of a silent and quivering life beneath the stoic exterior, Mortensen‚Äôs Nikolai is nothing but gesture and exterior, both moving resolutely at the command of his iron will‚ÄĒand yet both performances bespeak an authenticity all the more impressive for the artificial goings-on around them.

While one cannot, lamentably, banish an acknowledgement of Haggis‚Äôs knowing and effective use of Jones‚Äôs performance‚ÄĒwhich graces the former‚Äôs offensive falsehoods with a dignity and truth they do not deserve‚ÄĒexploring Cronenberg‚Äôs fascinating collaboration with his lead actor yields genuine evidence of those certain masterly abilities he possesses, without the bad faith of salvaging the shoddy and mutilated whole of which they are a part. Unequivocal praise or panning is the unfortunate rule of these latter days of criticism‚ÄĒthough assuredly it was ever thus‚ÄĒand granting Cronenberg the blank check of the former is no more honest than according the latter unquestioningly to the Haggis film. Sorting out our artists from our poseurs is a seeking out of artistic honesty, which requires a parallel of critical honesty. If forgoing the latter does not, and cannot, destroy the former, it certainly helps to muddy the waters.