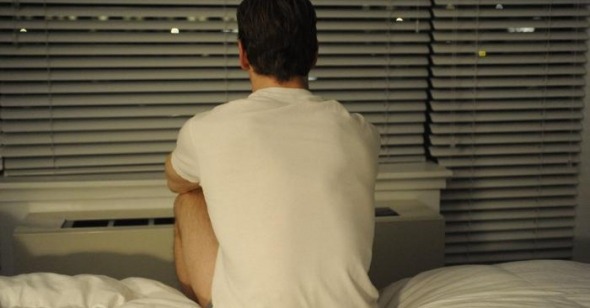 The Grind
by Michael Koresky

Steve McQueen‚Äôs Shame is the latest entry in what we‚Äôll call the sad sex subgenre. In a sad sex film, partners don‚Äôt enjoy each other‚Äôs flesh, they rut. They bump uglies. They shudder. Their faces evince no enjoyment as their bodies try to make contact. Sometimes they cry during orgasm. Sex for the protagonists of these types of films is not merely unpleasant or temporarily uncomfortable, but rather a manifestation of their emotional infertility, an existential scream from the void. Their emptiness is exacerbated by the fact that they cannot seem to make physical contact with another human.

The sad sex movie has been in vogue at least since 1972, when Marlon Brando and Maria Schneider spent those melancholy late afternoons in that barren Paris apartment, and has found subsequent expression in morose anti-erotic treats such as Louis Malle‚Äôs Damage, David Cronenberg‚Äôs Crash, and Patrice Chereau‚Äôs Intimacy‚Äîeach of which was met with an equal mixture of fascination and skepticism upon release, not to mention a whiff of scandal. Sad sex is slightly more accessible than violent sex (Oshima‚Äôs In the Realm of the Senses, for instance, falls outside the purview, as it‚Äôs a trickier take on the liberation of taboo); it grants instant import to what would otherwise be merely titillating. It has made its way into mainstream art-house fare, notably giving memorable charges to otherwise palatable middlebrow titles like The Wings of the Dove (see Helena Bonham Carter thrusting and weeping naked!), Monster‚Äôs Ball (watch a stripped Halle Berry beg to be fucked after her son dies!), and even Spielberg‚Äôs Munich (witness Eric Bana‚Äôs Mossad macho man cumming and crying while haunted by the assassination of Israeli Olympians!). Even this fall‚Äôs Melancholia offered the sight of Kirsten Dunst mounting a stranger on her wedding night as a way of working out her cosmic depression. All of these scenes are meant to do one thing: communicate to the viewer that a body in the throes of bad, sad sex is just about the most pitiable thing you could ever imagine.

McQueen‚Äôs second feature‚Äîfollowing that object of abjection disguised as historical drama called Hunger‚Äîis a top-to-bottom sad sex movie, pushed so far to its limits (and so short on subtext) that it plays and feels almost like a farce. Ostensibly a study of addiction focused tightly on the disconnection of one anonymous Mr. Handsome, a.k.a. Brandon (Michael Fassbender), Shame follows a familiar downward-spiral narrative. Right from the start we know where we stand: this is privileged New York, and therefore a palace of loneliness. Amidst the sleek, sterile surfaces of his faceless, white-walled apartments, we watch Brandon‚Äôs parade of lonely one-night-stands, call-girls, and bouts of soul-crushing cruising; during the day we try to make sense of his dull interactions with coworkers at his predictably under-defined job (oh, those white men with their anonymous careers, in which they sit around conference tables in undecorated, inhuman spaces!). Brandon is no American Psycho, but the antiseptic environment McQueen recycles is so by-the-book, and Brandon is established as so dead-on-the-inside, that he initially seems a close cousin to Patrick Bateman (one wouldn‚Äôt be surprised to find a chainsaw in his closet).

Some might be surprised after the much-heralded Hunger that McQueen would be so reliant on derivative imagery. But the seeds were there in that previous film (glimpses of shock and debasement lent grandeur through slow motion and ‚Äúmeditative‚Äù long takes; loss-of-innocence flashback as insipid nature ballet), and here they blossom in full force. Shame is littered with clich√©d compositions and received ideas: a rear view of a naked Fassbender in the bathroom urinating while a female voice from his always bursting voice-mail drifts across the apartment repeating the words ‚ÄúBrandon, where are you?‚Äù until they gain a certain banal significance; a nameless female partner removing her bra and panties, her head positioned so that it‚Äôs cut off at the top of the frame; Brandon on the subway in an out-of-focus shot clearly intended to make him look like a hollowed-out ghost. As presented, Brandon‚Äôs addiction (enabled by a ceaseless stream of internet and DVD porn and webcam sex) is not only the manifestation of a profound personal disillusionment‚Äîit‚Äôs a 21st-century malady.

It‚Äôs also a familial sickness, as we learn when we meet the film‚Äôs only other main character, his younger sibling, Sissy (Carey Mulligan), who comes to crash unannounced, and unwanted, at his apartment. A jumble of nerves in a leopard fur coat and red hat, she is the Oscar Madison to Brandon‚Äôs Felix Unger, blaring seventies pop songs on his record player, leaving piles of food on his coffee table, and even drinking orange juice out of the carton. The similarly messed-up Sissy (unable to hold down a man or a job) represents to Brandon the past he wants to leave behind; her storming back into his life sends him into a tailspin. The emotional impact of her return on Brandon is supposed to be best expressed in Mulligan‚Äôs centerpiece scene, a lethargic, minimalist interpretation of ‚ÄúNew York, New York‚Äù she performs at an extravagant piano bar. Mulligan‚Äôs in extreme close-up as she breathily belts it out. A single tear rolls down Fassbender‚Äôs cheek. Yet the audience is simply left wondering how this non-singer (Mulligan‚Äôs baby voice barely manages to eke out the melody) got such a sweet gig.

Sissy‚Äôs improbable performance is just one of many examples of McQueen‚Äôs penchant for constructing affecting images that have no basis in reality. A conceptual visual artist, he focuses on the whole rather than the details; in the case of a character-based film like Shame, all-important authenticity is sacrificed. Fassbender‚Äôs penis, already the film‚Äôs most talked-about featured player, is therefore not merely a naked actor‚Äôs appendage but a perfectly sculpted prop unto itself, exquisitely dangling about as Fassbender repeatedly passes an artfully centered bisection of white wall. And when Brandon and Sissy have a shattering, single-take couch confrontation, a ridiculous black-and-white cartoon (a Max Fleischer folio?) plays endlessly on a television, out-of-focus in the background‚Äîa flat bit of ironic juxtaposition that says more about the director‚Äôs need for compelling mise-en-sc√®ne than what his characters might actually be doing at any given moment.

A film like Shame flatters its audience by assuring them that wealthy, well-hung, improbably handsome men living the high life in New York City and bedding countless numbers of attractive partners are really miserable, deluded schmucks. When Brandon tells a date that he doesn‚Äôt understand why anyone would want to get married (it ‚Äúdoesn‚Äôt seem realistic,‚Äù he protests), we‚Äôre clearly supposed to shake our heads in either pity or embarrassment for the fool. If Shame came across simply as one man‚Äôs story of addiction, rather than a grandiose millennial social diagnosis, then perhaps Brandon‚Äôs plight would be more affecting and vivid, rather than fodder for a heavy-handed visual experiment. Yet the film feels as soulless as Brandon‚Äôs bouts of sad sex. Ending on a pointlessly ambiguous will-he-or-won‚Äôt-he cop-out, McQueen‚Äôs film clearly doesn‚Äôt know what to do with its protagonist. Since he‚Äôs a concept rather than a character, what does it matter?