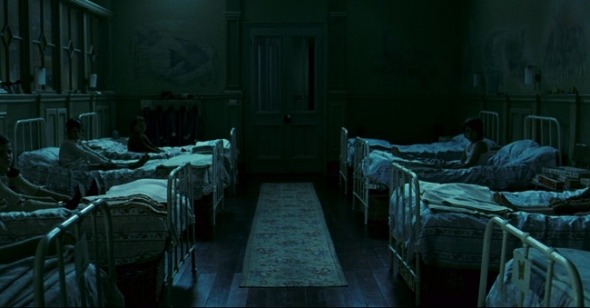 Like many horror films, The Orphanage operates between two poles. One is that condition of fervency‚Äîof both delight and terror‚Äîthat comprises so much of childhood, the other that implacable, unmistakably adult state of banal pathos and dull dread that results when magic fades but our memories don‚Äôt. By some cruel stroke of evolution or the Almighty, our experiences feel increasingly muffled or lackluster as we age. Somewhere in early adolescence, everyday dreck begins supplanting sublimity. To add insult to injury, our childhood joys and terrors burn in our memory like flashbulb imprints, taunting us with recollected intensity. George Orwell described childhood as ‚Äúa sort of alien under-water world which we can only penetrate by memory or divination.‚Äù Juan Antonio Bayona‚Äôs tale of the obscure, lonely universes of two unfortunate children mines both memory and divination‚Äîthe latter enacted by an ashen-faced, mascara-smeared Geraldine Chaplin‚Äîbut they only get us part of the way. In The Orphanage, we see that the only force that can truly infiltrate the lives of children is that of the Mother.

Nearly 30 years after leaving the orphanage in which she happily spent her youth, Laura (a strong Bel√©n Rueda) returns with her husband, Carlos (Fernando Cayo), and their son, Sim√≥n (Roger Pr√≠ncep). They‚Äôve purchased the building, which rests in an isolated setting close to the sea, to run it as a home for children with special needs. When Benigna (Montserrat Carulla)‚Äîa strange old lady outfitted in a rain bonnet and coke-bottle glasses‚Äîshows up unannounced, we learn that lonely little Sim√≥n has some special needs of his own. Benigna‚Äôs visit soon takes a disturbing turn, and her unsettling presence, coupled with Sim√≥n‚Äôs suddenly increased cadre of imaginary friends, needles Laura. Her agitation swells into full-blown hysteria when, at a welcoming party for her new charges, she‚Äôs attacked by a boy who emits strange animal noises and whose face is hidden by a filthy, grotesque, almost harlequin sack mask. Then her son goes missing. As the search for Sim√≥n first intensifies and then languishes amongst myriad dead ends, Laura starts to suspect that Sim√≥n‚Äôs imaginary friends are taunting her. Carlos puts his faith in the police and subtly tries to reason with his wife, but she increasingly explores a number of less than conventional routes to find her son.

The feature debut from director Juan Antonio Bayona, The Orphanage came to fruition thanks to the support of producer Guillermo Del Toro, director of last year‚Äôs war movie-cum-nursery fable Pan‚Äôs Labyrinth. The two films share several qualities, from their antique aesthetics (this one manages to at once be a visual pastiche of everything from The Omen to The Beguiled to The Night of the Hunter while nevertheless asserting its own unique style) to their thinly veiled allegories about faith. But The Orphanage eschews the CG effects that hobbled Pan‚Äôs Labyrinth, and though it boasts a fantastical element, it‚Äôs firmly rooted in a pedestrian brand of fear, which makes it all the more terrifying. Though at heart a pretty conventional genre picture, The Orphanage impresses on several levels‚Äîit conjures palpable shame, loss, love, and legitimate fright; it refuses to spoon-feed or overindulge its climax; it offers subtle but smart Oedipal undercurrents; it boasts an aesthetic at once familiar and strange, and it‚Äôs realized by almost universally accomplished technical elements (with the exception of a too obvious score and overwhelming sound design).

A sense of devastation permeates the film due to effective cinematography from by √ìscar Faura. The camera alternately moves like a voyeur‚Äîpeering out from inside closets, hovering overhead, creeping around corners‚Äîand an oppressor, often whittling Laura and Sim√≥n into a small corner of the frame or taunting with a slow reveal. Faura‚Äôs most effective technique, however, may be his sparing use of handheld sequences‚Äîthese sudden rushes of movement, where bodies jumble in and out of frame, are all the more arresting when punctuating a scene that otherwise consists of clean and methodical tracking shots.

In addition to being poignant and evocative, The Orphanage is at times downright scary. Bayona largely eschews gore (though one scene veers unpleasantly far in that direction), relying instead on thumps, rattles, and the power of myth and suggestion. At a time when most entries in the horror genre strive to find the most gruesome, gratuitous ways to violate flesh, The Orphanage returns to the triptych of shame, psychoanalysis, and suspense so effective in horror classics like Psycho and Carrie. It‚Äôs also rare and refreshing that a work about children with various disabilities doesn‚Äôt condemn them all to psychosis.

What it does subject them to, again, are mothers: good, evil, or inadvertent, their power is at the heart of the film. Laura and her friends at the orphanage come together due to their lack of mothers; Sim√≥n carries an unfortunate legacy that we can deduce came from his birth mother; and Benigna‚Äôs maternal issues bring about a series of events that impact the fate of every character. Laura, who‚Äôs compared to Wendy Darling, Peter Pan‚Äôs would-be lover and/or mother, rips a charm of St. Agnes, the saint for virgins and rape victims, from around her neck in her final showdown with the orphanage. Though it offers plenty to unpack about women and their (metaphorical and/or biological) wombs, The Orphanage mostly emphasizes its own effectiveness as a scare machine. If you think you‚Äôll need protection, however, you might want to ask your dad.