Syndromes and a Century 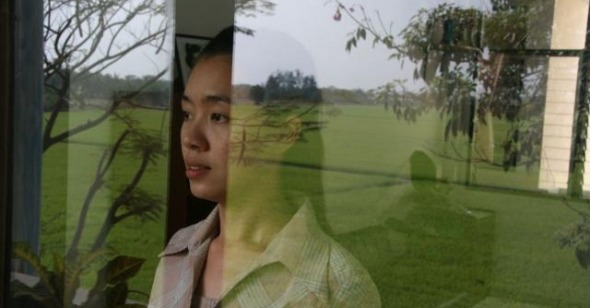 Applying the generic ‚Äúmasterpiece‚Äù tag to any of the decidedly unassuming films of Apichatpong ‚ÄúJoe‚Äù Weerasethakul does his work a disservice, as applicable as it may often be. Be prepared to see the label bandied about with increased frequency should Syndromes and a Century, the Thai filmmaker‚Äôs fourth feature, find U.S. release. Not to set the bar too high, but I‚Äôll happily join the choir, as Syndromes may well be the filmmaker‚Äôs most assured, complex, and rewarding film to date. I hate to praise a director I love with such milquetoast terms of approval as ‚Äúgentle‚Äù and ‚Äúlulling‚Äù (‚Äúvisionary‚Äù and ‚Äúbold‚Äù are certainly much sexier), but Weerasethakul‚Äôs films approach a level of calm hugely unfashionable in a culture attuned to the hyperactivity of Park Chan-wook. A whisper in the ear when audiences respond more readily to a punch in the face, Weerasethakul has been able to work surprisingly regularly since his debut feature, Mysterious Object at Noon, becoming a fixture in international cinema in only a few short years. Somehow his brand of warm, honest humanism straddles a fine line‚Äînever really in fashion, while never quite going out of style for the discerning. A majority of film students might steal from the likes of more overtly cinematic directors like Martin Scorsese or Sam Peckinpah, but the ones to watch out for‚Äîthe real talents‚Äîare going to be those expert in early Renoir.

Like another NYFF favorite, Hong Sang-soo, Weerasethakul is a fan of illumination through narrative contrast, easily able to jump productively between the physical and metaphorical halves of Tropical Malady, the urban and rural environs of Blissfully Yours, and the facts and fictions of Mysterious Object at Noon. Syndromes and a Century is built around a similarly simple, yet complex dichotomy; its first half set inside a rural clinic, the second in a downtown Bangkok hospital. This split would only be moderately noteworthy if not for the fact that both sections play out what‚Äôs largely the same narrative, and rely on the same actors, similar dialogue, and situations, not unlike Alain Resnais‚Äôs Smoking/No Smoking project. I‚Äôve read that the film‚Äôs episodes are built from recollections of Weerasethakul‚Äôs parents, but this knowledge certainly isn‚Äôt a prerequisite for enjoying both simply homespun tales. It‚Äôs also been remarked upon how each segment occupies different temporal space (the former the late Seventies, the latter the present day), but I found just as much to chew on imagining them as riffs on contemporaneous urban and rural medicinal practices. To Weerasethakul‚Äôs credit the film resonates either way.

Both halves begin with confident female doctor Dr. Tei (Nantarate Sawaddikul) interviewing two shy prospective male doctors. In the rural segment, Toa (Nu Nimsomboon) is obviously stricken by her but barely able to speak in her presence, leading to scenes of awkwardly charming courtship as Tei goes about her duties in the hospital. The urban half spends more time with confident Dr. Nohng (Jaruchai Iamaram), who was in the first half a recently discharged and questionably skilled military medic. Weerasethakul, whose parents are both physicians, has marked the first half as a tribute to his mother, the second as a tribute to his father, but the acquisition of this information long after seeing the film hasn‚Äôt dimmed my sense that the ‚Äúsplit‚Äù of Syndromes and a Century is more than a little cosmetic, as he‚Äôs offered across both halves, as in his previous films, a cast of people simply existing in and amongst their environments, shaping the spaces they occupy and being shaped by them in return. Weerasethakul‚Äôs more in tune with the rhythms of daily life than just about any filmmaker currently working, and Syndromes and a Century exists content to merely ebb and flow‚Äîthere‚Äôs no manufactured medical drama, just long sequences of quiet, folksy interactions between staff and patients with lovely pillow shots of the outside environment peppered throughout. In the end, accumulated similarities far outweigh and surface differences‚Äîart imitating life.

Syndromes and a Century is the kind of film that makes one glad that there are innumerable modes of production and cultures producing storytellers who draw from indigenous and global traditions. Weerasethakul is a perfect filmmaker for the moment, channeling something of a regional Thai spirit into an exportable language without sacrificing his idiosyncratic bent. I can‚Äôt imagine him venturing off from Thailand to direct a mushy international co-production starring Tilda Swinton and Bruno Ganz, but I also wouldn‚Äôt put the attempt past him. As if to remind audiences at the end of a thoroughly unassuming work of how completely in control a filmmaker he is, a lengthy conversation between hospital workers in a basement room ends with pan up into a perfectly round, perfectly black intake vent, a veritable cinematic eclipse that recalls rural discussion of eclipses from earlier in the film. The camera holds there for a few minutes, the dark hole sucking in smoke from the room below, as all light is gradually extinguished. Sure, this image and many of the spotless interiors of the modern hospital may well be nothing more than smartass references to Kubrick‚Äôs 2001 (a similarly split film), but by now, I‚Äôd argue that Weerasethakul‚Äôs earned the opportunity to make the nod.