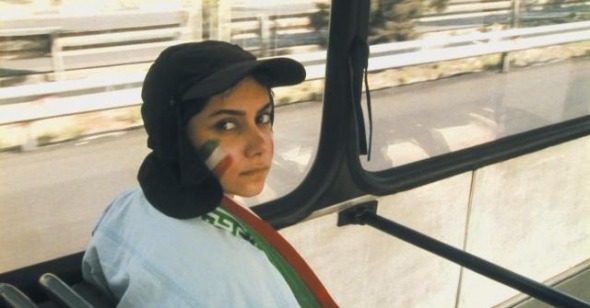 Shortly after the Green Bay Packers‚Äô glorious victory over the New England Patriots in Super Bowl XXXI, my sister did something a non-Packer-fan might find strange: she purchased, for a not insignificant sum, a small piece of turf from Lambeau Field; to this day, it still sits in my parents‚Äô freezer. To the Packer fan, though, there‚Äôs nothing odd in my sister‚Äôs behavior. That ground is sacred. By buying it, my sister was claiming a piece of collective memory, invoking her place in a community. That‚Äôs how it is with fandom‚Äîwhether it‚Äôs Packers or Bears, Yankees or Red Sox, England or Germany, being a fan is about that sense of belonging it gives us, to a people, a place, a city, a nation.

So it is with the young women of Jafar Panahi‚Äôs outstanding new film Offside, who dress as men and surreptitiously sneak their way into Tehran‚Äôs Azadi Stadium to watch a World Cup qualifying match between Iran and Bahrain. Flaunting a nationwide ban from sports stadiums in Iran, when discovered, they‚Äôre arrested and put in a makeshift holding pen, where they spend most of the film awaiting their official punishment. At first, it seems like their act of defiance is nothing short of a transgressive burst of feminism, an indictment of an oppressive regime that systematically excludes women from full citizenship. That‚Äôs true, in a way, but it‚Äôs more of a half-truth. These women aren‚Äôt (consciously) feminists, and, more profoundly, their defiance isn‚Äôt even explicitly political. These women are soccer fans. They want to watch the match because they want to root for Iran and desire nothing more than to participate in this small act of nationalistic fandom, and to cheer for the country they call home, though it officially excludes them from this aspect of public life.

Shot more or less in real time in long, fluid takes, Offside focuses almost exclusively on the women, as they try to follow the game from their position of confinement. They, and we, make do with information pieced together from a soldier‚Äôs commentary, the roar of the crowd, and brief glimpses of the game in the background (impressively, Panahi clearly shot some of the film during the game itself and incorporated those scenes seamlessly into the whole). The highs and lows of the game give the film an artificially satisfying narrative arc, and the unlikely rapport between the women (Sima Mobarak-Shahi, Shayesteh Irani, Ayda Sadeqi, Golnaz Farmani, Mahnaz Zabihi, and Nazanin Sediq-zadeh) and the soldiers (Safdar Samandar, Mohammad Kheir-abadi, and Masoud Kheymeh-kabood) creates a misleadingly light, casual comic atmosphere. Offside is a deceptive little crowd-pleaser‚ÄîI could almost hear the collective sigh of delight from the New York Film Festival audience when the lights came up. Yet even as Offside may be a bit easier to take than Panahi‚Äôs last two efforts, Crimson Gold and The Circle, its palatability only obscures its devastating political critique in false uplift. Whatever the small joys and defeats the women feel in rooting for their team, they have all been arrested and will face consequences only obliquely implied here. In the film‚Äôs climax, the women cheer for Iran with their fellow countrymen and seem to forget that they‚Äôre on a bus taking them to the vice squad for prosecution. These brief, fleeting moments of joy are undercut by a tragic irony; the community that is created through the soccer match is illusory and ephemeral, a fiction disguising an ugly political reality.

Over the past decade, Panahi has built a career on beautifully executed, pitch-perfect slices of Iranian urban life, subtle and delicate pieces of social criticism, deftly and stylishly captured by an artist‚Äôs eye. If Offside can‚Äôt be characterized as a major step forward for him, it‚Äôs only because Panahi‚Äôs output has been remarkably consistent: Offside joins The White Balloon, The Mirror, The Circle, and Crimson Gold as evidence that Panahi‚Äôs is one of the most distinctive, important, and provocative voices in contemporary international cinema.