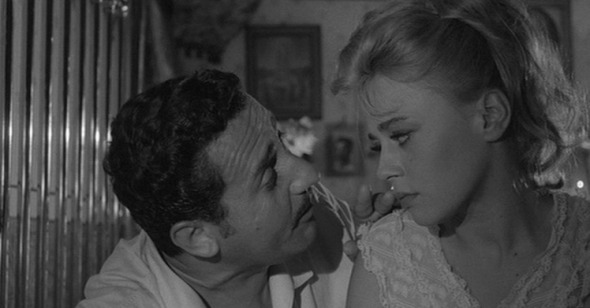 The Gang’s All Here
By James Crawford

Caught between the blinding searchlights heralding 50 Years of Janus Films and the shadow cast by Warren Beatty’s tentpole commie romance Reds is one retro revival at the New York Film Festival screened to intolerably meek fanfare. Mafioso, Alberto Lattuada’s rediscovered 1962 treasure slipped by almost unnoticed this past Saturday, and likely it’s because the circumstances surrounding the film’s history aren’t sexy or dramatic. The film is by a little known director (I hadn’t even heard of Lattuada until having seen this film, though I’m hardly the world’s foremost expert on Italian cinema), whose greatest claim to stateside fame is a protracted, ultimately failed battle with Fellini over authorship credit for their 1950 coproduction Variety Lights. Mafioso had a limited stateside release back in 1964 by an even lesser known distributor, and though it received solid notices, Eugene Archer’s original New York Times review, which extols the film’s “authenticity” and “efficacy of method,” make it clear Mafioso didn’t set the world of burgeoning cinephilia on fire, like the more canonical, sober masterworks by Italian heavyweights of the period.

Even so, the criminal underappreciation for Lattuada’s film is mystifying, as it resonates, tonally, and stylistically with the comedies of Pietro Germi, which are and were popular in the U.S. In Germi’s tradition, Mafioso is a bifurcated drama amused by the sudden, frequent, and subtle switchbacks made between comedy and tragedy. To wit: Lattuada plumbs material that a director like Visconti would mine for social realism, and takes a much more lighthearted view. Lattuada shoots the brooding slice-of-Sicilian-life found in Visconti’s La Terra trema in the beautifully lucid, expansive tradition of Antonioni, zeroing in on the complex negotiations of family dynamics, and playing the whole thing under the umbrella an ever-ominous mafia threat—and finds humor in it all.

Elaborately moustachioed and impeccably dressed, Antonio (Alberto Sordi) is called into the head office of the Fiat auto plant where he works as foreman, on the eve of his long-awaited vacation to his ancestral home in Sicily. It seems as though Antonio’s in big trouble, being called on the carpet at work; but his boss, grim, blustery, and rotund, doesn’t want to talk shop. He requires a special favor: will Antonio take a certain gift to Don Vincenzo, the capo di capi (or boss of all bosses) who just so happens to live in his hometown? Formally, the scene’s gravity anticipates the opening to Coppola’s The Godfather, but Antonio’s blissful ignorance saps it of all seriousness, morphing it into an interaction of weightless mirth. Antonio accepts a cigarette, but declines to light it because he doesn’t smoke; inquires after his boss’s heritage but fails to hide surprise when learning that he’s not a native Italian (he’s a transplant from Trenton, NJ); and is so flummoxed by the mechanically operated office door that he’s momentarily unable to leave. Under Sordi’s adept timing and physical comedy, Antonio is like a Latin Tati—precise and fastidious, but also gangly and dithering, and letting the world pass him by.

In the city, he’s basically a nonentity, overrun by his blonde bombshell wife Marta (Norma Bengell), and his two impossibly cute, impossibly blonde children, but once the family arrives at his native town way up in the Sicilian foothills, everything changes. “Nino,” as he’s affectionately known, is descended upon by his family, a curious troupe of farming-class misfits who wouldn’t be out of place among circus freaks: a bearded lady cousin, a father missing his left hand, a gaggle of toothless, puckered aunts, wearing the same shiftless black dresses—all babbling in the same, nearly incomprehensible local dialect. Marta offends the family by bringing a present of gloves to the one-handed patriarch, and by refusing some of their hospitality (though she does it ever so politely); for their part, the clan disdains her gaudy dress and “northern Italian” aloofness. In the middle of it all, Nino remains oblivious to everything but the happiness generated from reconnecting with family and childhood friends. Even ominous, and increasingly solicitous meetings with the avuncular Don Vincenzo (Ugo Attanasio) are unable to dampen his (and the film’s) mood. Thus in its focus on Nino, the film blusters past the town’s poverty, its helpless enslavement to organized crime, and the presumptuous, grotesque paternalism of the Mafiosi. Mafioso isn’t entirely sympathetic to Antonio’s disposition as cunningly critical of it, revelling in his physical comedy, but lingering long enough on the town’s predicament to suggest there are problems with glorifying his temperament too highly.

These days, I seem to be speaking a lot about films that reconfigure our understanding of genre, and Mafioso is another film that falls in that line. In between Nino’s successive meetings with the Don, he’s being subtly assessed by his thug as to his suitability for performing a special task for the Family—and everything he does seems to make him perfect for mafia life. Nino proves himself a crack shot, knocking down every target at a county-fair shooting gallery: his companion’s eyes narrow with professional interest, while portentous, overdetermined strings start to swirl in the background—the net of gangland life is cinching ever closer around this hapless guppy. Because the entire action is filtered through his Pollyanna perspective, even these most portentous moments are passed off as light and frothy. The world is amusing because Nino sees it as such, as if one character’s disposition can bend a narrative, and alchemically transmute leaden drama into comic gold—at least for a time. Even the densest mark is gifted with a modicum of intelligence, and it’s only matter of time before the weight of personal duty and reciprocity start to dawn on dear Nino, and the tenor of Sordi’s performance shifts accordingly. Almost imperceptibly, Nino’s unawareness turns from being ingenuous to performative, becoming a charade kept up for the sake of appearances and the hopes staving off the inevitable. But it’s futile: Don Vincenzo found Nino his job at the Fiat factory, and so a debt must be repaid, all having to do with that present from the opening act.

The ending, which I won’t give away, is shocking and delicious, a stylistic and emotional break from the slight, fundamentally unsustainable frivolity that preceded it. The gravitational pull of one’s past (and, here, ancestral history) is inescapable, and when Antonio (who in the aftermath is no longer just “Nino”) returns, the basic tenets and outlook of his life have been irrevocably altered.