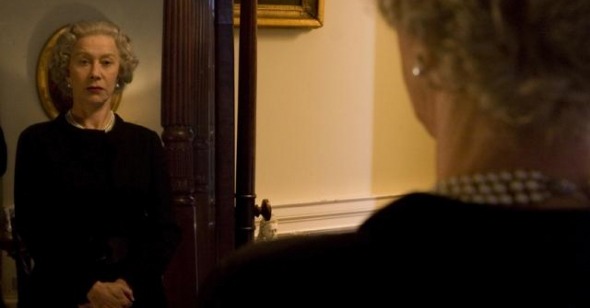 There‚Äôs a curious paralleling in the New York Film Festival‚Äôs two sympathetic considerations of embattled monarchies this year: Sofia Coppola‚Äôs Marie Antoinette, giving a ‚ÄúGirls Just Wanna Have Fun‚ÄĚ rehab to that tween Bourbon, and Stephen Frears‚Äôs Opening Night selection, The Queen, which courts the Windsors at the nadir of their popularity, the week following Lady Diana Spencer‚Äôs fatal car crash in 1997.

Side by side, the films are a study in demographic gap; Marie, overtly gaga for royal pomp and festooned with post-punk nuggets, betrays its biopic function, acting largely as a solipsistic ‚Äúpoor little rich girl‚ÄĚ fantasy of excess, a confectionary binge of a movie set between the dark chocolate Hapsburg court and puff pastry Versailles. Coppola‚Äôs film completely aligns itself with its heroine and consequently custom-tailors itself to a not very self-aware, hip, young, and female audience, for whom it proffers emotional flattery and shopaholic wish fulfillment (hearing a fiftysomething man comment, post-screening, that it ‚Äúcast quite a spell‚ÄĚ was the equivalent of seeing a lip-glossed grandmother in a Baby Phat tracksuit).

The Queen, by contrast, examines rather than exhorts, with its very earthbound Royal Family, a recognizably human bunch who are uncovered on the other side of the tube, settling in to watch themselves on the television news in a homely den, while wearing patchy bathrobes. Tellingly starring Helen ‚ÄúPrime Suspect‚ÄĚ Mirren (as much a generational placeholder as Marie‚Äôs Kristen Dunst), this film could be haphazardly grouped with that sort of drearily respectable Brit export whose appeal to the menopausal white wine set I used to make fun of when I worked tearing tickets at an upscale movie theater (from the director of (Mrs. Henderson Presents and the star of Calendar Girls‚ÄĒGod save The Queen!), but its stodgy, solid craftsmanship suits its subject like one of Elizabeth II‚Äôs crisp Burberry trench coats‚ÄĒa film about Her Majesty must necessarily be inclined to take itself far too seriously, flirting mightily with camp in the process.

Concentrating on the relationship between HMQ Elizabeth II (Mirren, whose solidly built middle-aged handsomeness suggests nobility‚ÄĒshe recently played an Emmy-winning Elizabeth I in a Channel 4 production) and a just-elected New Labour Prime Minister Tony Blair (Michael Sheen), The Queen‚Äės mode of address might be called Kitchen Sink politics; much of the film‚Äôs kick comes from seeing familiar personages placed in unfamiliar scenarios: Blair and wife (Helen McCrory) settling down to fish fingers with their kids in the kitchenette, Elizabeth touring her secluded Balmoral estate behind the wheel of a Land Rover.

As the more familiar forms of the political movie tend to vacillate between broad-stroke caricature and puerile romanticization, there is something bracing about The Queen‚Äės transposition of inflated-into-distortion public figures into unsensational, speculative private lives. The Royal Family is a collection of judiciously scaled character parts: Sylvia Syms‚Äôs Queen Mum, liquor-besotted and a bit dotty; James Cromwell‚Äôs gruff, daft Prince Philip, knobby-kneed in his kilt; and, best of all, Alex Jennings‚Äôs Prince Charles, a shy and slightly mortified humanization of a man who‚Äôs been badly misused by the press, his nervous hands always caught up playing itsy-bitsy spider (compare this to Coppola‚Äôs ironic/nasty treatment of the depressive Louis XVI to see why ‚Äúelliptical‚ÄĚ and ‚Äúdifficult‚ÄĚ aren‚Äôt necessarily synonyms). Mirren, a placidly powdered exterior haunted by the specters of emotion, is perfect in that mathematically nuanced way that English ex-Shakespearians can sometimes be‚ÄĒher Elizabeth doesn‚Äôt play as a keen impression, but an inhabitance.

Manohla Dargis in the New York Times reads the film as a careful excoriation of the Royals‚ÄĒher point is, of course, well made, though it doesn‚Äôt jibe with the film that I watched. In The Queens opening scene, Elizabeth banters with her portrait painter, discussing the recent election results and musing that she‚Äôd for once like to have the experience of casting a ballot‚ÄĒafter a moment‚Äôs consideration, the artist assures the Monarch that he won‚Äôt be caught feeling sorry for a Queen. It‚Äôs an attitude Frears‚Äôs film shares (Coppola‚Äôs does not), but if it‚Äôs incapable of pity for the burden of privilege, it‚Äôs also remarkably nonjudgmental toward these fragile people who‚Äôve had their egos contorted by absurd circumstance.

If The Queen contains a villain, it‚Äôs something institutional, perhaps that amorphous creature called "the media" (Frears‚Äôs film draws heavily on footage of contemporary news reports). Per the film, it‚Äôs they who chased Diana toward death‚ÄĒa stylized recreation of her flashbulb-strobed final minutes counts among the film‚Äôs biggest missteps‚ÄĒonly to blithely transfer the burden of their guilt onto the Windsors, attacking an immensely proud, intractable, and aloof family over their insufficient grief for a woman who‚Äôd shown only indifference for their stiff-upper-lip values.

Diana‚Äôs political greatness, like the unbeatable Mr. Blair‚Äôs, was an intuitive understanding of what‚Äôs required to be loved in this news-saturated fin-de-si√®cle‚ÄĒthe calls for her sainthood don‚Äôt come because her charity work was anything far beyond Charles‚Äôs, but because she knew how to look chic while talking land mines. The Queen‚Äôs tension results from the tug between Elizabeth‚Äôs stoic, calcified conception of personal dignity, and Blair‚Äôs PR-savvy understanding that dignity must sometimes be shorn, on-camera, for the gratification of the crowd‚ÄĒafter delivering his own televised eulogy, he pushes Her Majesty to follow suit. The picture‚Äôs challenge is that, in showing the Queen gradually brought to bridle by the will of the mob, it unearths a trove of ambiguities: we may be slightly horrified, or grimly amused, at the rigor mortis that centuries of blood-thinning breeding, obsession with form, and singular grammar has programmed into these royal persons, yet there is something sad in seeing them dragged down by the Jacobins of the booboisie, down into Blair‚Äôs cloying populism. The outpouring of grief for Diana is ridiculous‚ÄĒthis Queen knows it, knows full well that the woman was a frivolous twit, and yet she has to betray her aristocratic vantage point and cater to 50 million emotionally spastic subjects, all for the sake of her Q ratings.

The Queen, actor-intensive and heavily funded with television money, doesn‚Äôt fit the traditional definition of ‚Äúcinematic‚ÄĚ filmmaking as, say, Marie Antoinette does. In fact, it could be considered a sequel to Frears‚Äôs 2003 small-screen work The Deal, also starring Sheen as Blair, a dramatization of the machinations behind the selection of Labour Party leadership in 1994. Both works also share an author, scribe-of-the-hour Peter Morgan, whose first play, Frost/ Nixon, examining the circumstances behind the 1977 televised exchanges between superstar British interviewer David Frost and the humiliated ex-President, is currently playing London. Morgan, on the difference between television and film writing: ‚ÄúYou can be far more challenging, articulate, and intelligent writing for television than you can writing for the cinema.‚ÄĚ

Make what you will of that statement, coming from a country with a far different TV culture than our own, but what he, Frears, and Mirren accomplish here is considerable in any medium. On the eve of Mr. Blair‚Äôs abdication, they‚Äôve articulately framed the morality underscoring one of the great ‚ÄúWe Are Here‚ÄĚ points in their nation‚Äôs recent history (and Europe‚Äôs‚ÄĒBlair may be publicly disintegrating, but his career has left behind an increasingly popular template), and in unprecedented form; a review in The Guardian notes that, while there had been two American network movies based on Chas and Diana‚Äôs ‚ÄúRoyal Romance‚ÄĚ within a year of their wedding, the fiction-film depiction of royalty has been a longstanding British taboo. And though it lacks the historically glib revolutionary posturing of Marie Antoinette‚Äôs ‚ÄúNever Mind the Bollocks‚ÄĚ typeface, or the lefty simplemindedness of Michael Winterbottom‚Äôs Road to Guantanamo, don‚Äôt let The Queen‚Äôs posh prestige packaging deceive you: it‚Äôs got more honest political inquiry, emotional veracity, and cajones than either of the above.