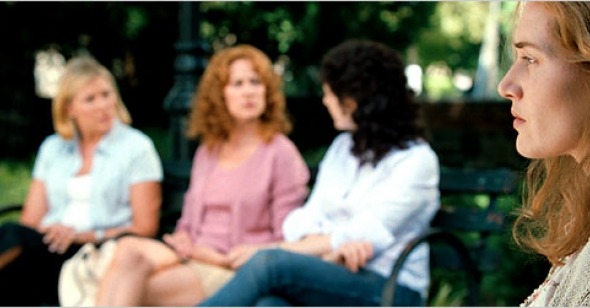 I am writing you this letter in appreciation of your most recent film, Little Children. I would like to start off by applauding your audacity and courage in illuminating the perils posed to our ever more secular (and not unexpectedly, ever more depraved) society, a subject that other filmmakers are far too timid to expose to the harsh light of public scrutiny. With Mr. Eisenhower in the White House, I sleep a little more soundly knowing that Ike and his cabinet are defending the world from enemies foreign (I need not elaborate on Khrushchev and the scourge of communism), but I had no idea that we currently face enemies domestic as well. I am speaking, of course, of the depravity running rampant in our current society. My wife and I have long considered a move away from Manhattan, fed up with its filth, its corruption, its perverts, whores, and all the other manifold elements that corrupt our souls. We once thought refuge could be found in the suburbs‚ÄĒperhaps Westchester; Tarrytown, and Rye are said to be particularly sanguine and amenable to raising two strapping young boys‚ÄĒbut I cannot abide the idea of Hank and Junior being exposed to the wanton filth and lurid depravity that eat away at our moral fabric like so many subversive termites. Before Little Children, I had no idea that our most outwardly benign enclaves are tainted by‚Ä¶by‚Ä¶philanderers, both male and female; pedophiles; mail-order johns; gays (!); and transvestites (!!)‚ÄĒin short, sexual deviants of every imaginable stripe. Even now, I grow weak even with the thought. And though I am thankful for your film, which unearths that which has been heretofore opaque and buried, I am saddened too: my evening martini tastes a little less clean; the tailfins on my Chevrolet sparkle a little less brightly; my weekly poker game is a little less jovial; my wife‚Äôs purity‚Äôs a little less assured (for who knows what filthy acts lurk inside her head?); my relationship with my neighbors seems a little less than sibling (for who ever heard of brothers, one with flaming red, the other with jet black hair?). My life, not to mention my perception of other people, will never be the same. As a man of clear-eyed and decisive moral judgement, Mr. Field, I turn to you for guidance: Trapped between perverts on the left and deviants on the right, what is a man of good standing and morals to do?

Forgive such heavy-handed and overlong sarcasm, but it feels like an appropriate way to engage with Todd Field‚Äôs Little Children, which might have been provocative in the 1950s, when burgeoning suburbia was an uncomplicated ideal of consumerism and the atomic family. Though its ideologies are scattershot, Little Children is fundamentally preoccupied with probing beneath the surface gloss of the suburbia myth, which begs the obvious question: why bother? Cinema history is already rife with that kind of narrative; after being inundated with The Stepford Wives (75), Risky Business (83), Blue Velvet (86), The Burbs (89), American Beauty (99), and the television shows Weeds and Desperate Housewives, does anybody still believe that suburbia (or its functional correlative, small-town America) is as sanctified and pure as it outwardly seems? Todd Field must believe so, for it‚Äôs the only reason to explain why he‚Äôs churned out the abjectly awful Little Children, which is neither insightful, nor so shabby and low that its generates grotesque interest. However, in being infernally‚ÄĒbewilderingly‚ÄĒcertain of its own profundity and moral rectitude, it does accomplish a rare feat: as a point of comparison, it turns Sam Mendes‚Äôs indefensible American Beauty into a creature of poise, subtlety, and gracefully executed revelations.

Little Children starts promisingly, novelly enough, which is all the more the pity. Surburbia, here a small Massachusetts town, is depicted as an adult evolution of high school, in which three middle-aged mommies taking their children to the local park fawn over the daily arrival of Brad (Patrick Wilson), an impossibly handsome stay-at-home father. Cowed by his good looks, the mums are too terrified to speak to him. Sarah (Kate Winslet), who also brings her kid to play, is more brazen, and the maternal triumvirate challenges her to get Brad‚Äôs phone number. Sarah goes one step further and kisses Brad‚ÄĒmuch to the dismay of the mothers, who are so scandalized that they gather up their children and bolt from the park. With both unable to think about anything but that momentary clinch, thus begins adultery. Being the two most enlightened members of their community‚ÄĒshe holds a Ph.D. in English lit, he‚Äôs a lawyer in all but name, having repeatedly failed to pass the bar exam‚ÄĒthe two are drawn together, spending afternoons in the company of both their children. Pressed closer by their unsatisfactory marriages (his wife (Jennifer Connelly) is shrewish and uninterested in sex; she discovers her husband huffing on an internet porn star‚Äôs panties while masturbating in front of his computer screen) they fall into bed, furtively fucking while visiting under the premise of daily playdates‚ÄĒon the washing machine or a spare mattress thrown on the attic floor.

Providing local color for this rather tame affair is a cast of outcasts and bigots. Ron (Jackie Earle Haley), a sexual offender on parole moves into the community to live with his mother, a sweet old dame doggedly convinced of her son‚Äôs virtues. Ron is roundly persecuted by everyone, but by none more vigorously than Larry (Noah Emmerich), an ex-cop on forced retirement due to a fatal, possibly racially motivated shooting, who fills his voluminous spare time by waking Ron up in the wee hours of the night. Cutaways from Sarah‚Äôs husband pleasuring himself illuminate Frank* the transvestite and Earl*, who partakes ‚Äúof anonymous gay sex in highway rest stop bathrooms.‚ÄĚ (*Field‚Äôs glib dismissal of these characters makes me care so little about them that I can‚Äôt even remember their names.) A group of late middle-aged women gathers to discuss literary classics, but the participants can‚Äôt render any opinions on Madame Bovary save high-school lit bromides or morally outraged tirades against the heroine‚Äôs whorishness. The list goes on and on, but essentially there you have it: a pastiche, not so much of people, but impossibly flawed totems or archetypes presented and summarily judged without the irritating encumbrance of nuance or self-reflection. The list is rote and predictable, and condescending to its characters‚Äô foibles to the point that a sneaking suspicion begins to set in: What if I‚Äôm being put on? What if this is some elaborate send-up that‚Äôs actually taking a dig at its own narrative and form?

There certainly is enough material to lend weight to that interpretation. Cinematographer Antonio Calvache frequently shoots at an anthropological remove that can only surmise the depths of his subjects‚Äô thoughts and emotions. Ron‚Äôs visit to the pool is structured like a nature film; when the community discovers the presence of a sex offender immediately in their midst, panicked children thrash and churn the water like watering hole animals escaping a predator. And most tellingly, an announcer hired from NFL films frequently intervenes with voice-overs for every major character save Ron‚ÄĒa narration that is a bemused mix of documentary tradition and B-noir internal monologue. Then the ending comes along and obliterates any sense of humor or satire, and emerges as a straight-forward expos√©, except, as per requests of the film‚Äôs distributors, I‚Äôm not supposed to reveal it.

Know what? Screw it; Little Children deserves to be killed and resurrected and killed again, so here goes. Consider this a spoiler alert‚ÄĒthe seat (and final proof) of the film‚Äôs straightforward approach to its subject matter lies in the final act. Over the last twenty minutes, Larry and Ron finally have it out (in the intervening time, Larry‚Äôs bombast has caused Ron‚Äôs mother‚Äôs fatal heart attack), while Sarah and Brad decide their love is one for the ages and decide to run off together. Their midnight meeting place, in a moment of beautiful symmetry, is the very same playground in which they shared their first kiss. Sarah arrives, kid in tow, straps her into a swing, and anxiously awaits Brad‚Äôs arrival; the minutes lengthen, and he doesn‚Äôt arrive. A creak of the gates, Sarah, flushed, turns around to find‚Ä¶Ron, in obvious physical distress. Meanwhile, Brad is hauling ass to make the rendez-vous, sprinting towards the playground. He is so captivated by his paramour that the only thing able to stop him is‚Ä¶a quartet of adolescent skateboarders? Brad takes time out of his breathless sprint to make a fateful skate down a flight of stairs, hits his head, and comes to his senses as the kids gush ‚ÄúDude, that was gnarly‚ÄĚ over his supine body: he loves his wife after all, and instead of running off, he‚Äôll return back home. Meanwhile, Sarah freaks out when she finds the daughter missing and runs off to find her. Larry comes to the playground, finds Ron, and having seen the light, apologizes for having inadvertently killed his mom and discovers that‚Ä¶Ron has castrated himself. I wish I were making this up.

In the denouement, everyone returns to the domestic situations they once so ardently despised (for what reason, exactly?), and the narrator intones, ‚ÄúWe can‚Äôt change the past, but the future can be a different story. And it has to start somewhere.‚ÄĚ In final estimation, Little Children reifies the moral-social anomie, complacency, and smugness that it labored so hard to break down. Todd Field‚Äôs film is an astonishing work: of disdain, of snobbery, of trivializing human suffering, and of the ugliest imaginable hypocrisies.