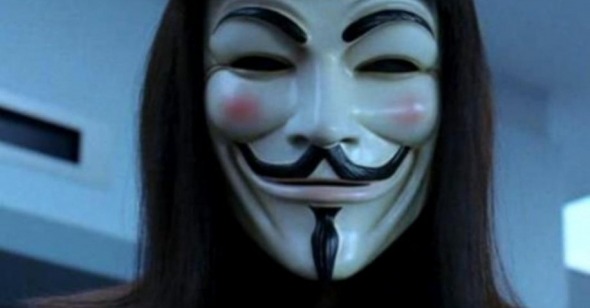 Alan Moore may be greatest victim of Hollywood‚Äôs comic book adaptation craze. Despite the overarching violent themes that permeate his storytelling, he is a master of constructing character nuance and idea-driven narrative depth in the graphic medium, not a peddler of testosterone-fueled tales with crass, mainstream appeal. But movie studios seem to view him in the latter vein. A prime example is the floundering Watchmen project that has vainly floated around Warner Bros. for years, most recently slipping away from Paul Greengrass (whose United 93 demonstrates that he‚Äôs found a separate brand of marketable superheroes). With the triple threat production power of the Wachowski brothers and Joel Silver, V for Vendetta certainly had a strong enough arm to get through production, and executed a respectable box office gain (although when the figures were riding high, the greatest competition was The Pink Panther). But marred by a consistently uneven perspective, V for Vendetta falls far short of recognizing Moore‚Äôs keen apocalyptic prophecy.

The story, as Moore originally told it, remains intact, albeit simplistically. Set in a futuristic London constrained by the tight grip of fascism (Moore, writing from 1981, set his tale in 1997), V for Vendetta follows the travails of twentysomething Evey (Natalie Portman), an orphaned child of doomed political protesters who becomes the unwitting accomplice of a vigilante known only as V (voiced by Hugo Weaving). Hiding behind a Guy Fawkes mask, (Fawkes attempted to bomb Parliament in 1605 with his ill-fated Gunpowder Plot), V remains an anonymous character poised to represent the battle for freedom (although a vague backstory suggests that the slick-talking masked man was on the receiving end of some particularly damaging government experimentation). When he isn‚Äôt ruminating in his undercover lair, a place laced with all the worldly art that the upstairs world has banned, V wanders London with explosives, blasting away buildings and following up with tastier visuals: fireworks. To add insult to injury, he blasts Tchaikovsky and Beethoven as the destruction unfolds. Along the way, Evey hesitantly joins her mentor, after he tortures her to test her dedication to the cause. As police relentlessly pursue the masked man, V for Vendetta plays out as a morality struggle, interrogating the ethics of terrorism.

Moore unwound his story episodically, over the course of seven years, during which time his style evolved and his ideology shifted to a more realistically grim outlook. He offered a mea culpa in the introduction to a republishing of the series by D.C. Comics, pointing out his own naivet√© at the beginning of his narrative. ‚ÄúI trust you‚Äôll bear with us during any initial clumsiness,‚Äù he wrote, pointing out the miscalculation that ‚Äúit would take something as melodramatic as a near-miss nuclear conflict to nudge England toward fascism.‚Äù He made no excuses, however, for his predictions about ‚Äúclimatic upheaval,‚Äù as Margaret Thatcher‚Äôs conservative government continued to reign over England.

Since Moore himself admits fallibility in his story, a film adaptation of the entire epic assumes that the filmmakers intended to smooth over the rough patches. Considering that Moore‚Äôs name is unattached to the project‚Äîand ads for the film featured deconstructivist artwork that bears little resemblance to the noirish techniques of Moore‚Äôs illustrator David Lloyd‚Äîfirst-time director Joel McTeigue seems to have taken the original premise and then kept his options open. It‚Äôs too bad, because he‚Äôs not an unskilled filmmaker, and his take on Vendetta is mildly entertaining and undoubtedly watchable, but still a far cry from the stunning dystopic vision of the original.

When a screenplay finally allows Moore‚Äôs characters to speak as he wrote them, perhaps a happy medium can be reached, and choice visuals will be justified by solid underlying material. It hasn‚Äôt happened yet. McTeigue and the Wachowskis surely respect Moore‚Äôs vision, but their digressions suggest a desire to overpower the source material. They also tone down the story‚Äôs racier aspects (Evey gives prostitution a try at the start of the comic, and is nearly raped by a band of undercover lawman; in the film, she is simply reprimanded for roaming around past curfew), which seems to contradict its anti-establishment premise. With the innuendo in Moore‚Äôs story eliminated, V for Vendetta becomes fine PG-13 material, but the irony of such a film being clipped to meet MPAA standards is a painful one.

Top honors may be best deserved by Lucinda Syson, Vendetta‚Äôs insightful casting director (perhaps doing penance for humiliating Sean Connery in Extraordinary Gentlemen, I don‚Äôt know). Faced with the questionable task of obscuring his face the entire film, Weaving pulls off his persona with nimbly expressive movement indicative of a stage training (he recently finished a run in the Brooklyn Academy of Music‚Äôs production of Hedda Gabler alongside Cate Blanchett). His dialogue, meanwhile, has sensational depth; with this role following his iconic computer villain Agent Smith in the Matrix films, he should be worried that his vocal chords might get typecast. Portman, who seems to have a knack for turning out decent performances in awkward films (remember those Star Wars prequels?), rises above. During a borderline misogynistic moment in which Evey is tortured and has her head shaved (unfolding in real time, during a single take), Portman compellingly conveys a horrific dread.

The strength of these performances make the flawed adaptation particularly disappointing, suggesting what might have been. V for Vendetta suffers from a lack of solid development, coming across as a mess of storyboards for the comic Moore might have thrown together before he figured out what direction to take. This is clear in the extended climax, when the film‚Äôs single pious law-abiding detective (Stephen Rea) chooses to cross a moral boundry for the sake of the greater good, pulling an ideological 360 in a matter of seconds. Has he opposed the system that cuts his checks all along? Has he given up on the battle to preserve judicial justice that preoccupied him in every other scene? Was he simply compelled to acquiesce by the fetishistically arousing sight of Portman‚Äôs bald head? Ultimately, V for Vendetta commits the polemic‚Äôs gravest sin‚Äîincoherence.