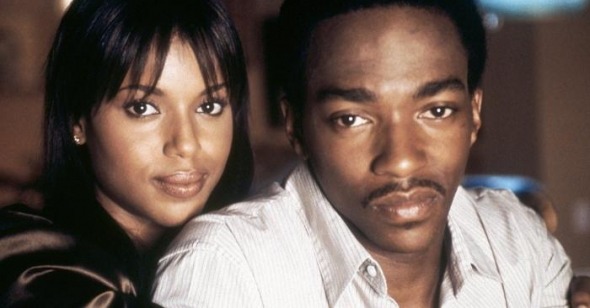 They Hate Him
by Michael Koresky

One of the many, many, many criticisms repeatedly lobbed at Spike Lee upon the release of each of his films concerns the use of longtime collaborator Terence Blanchard‚Äôs musical scores. Light and airy, with their smooth trumpet, glistening piano, and surprisingly lush influx of strings, Blanchard‚Äôs scores fall somewhere within the boundaries of ‚Äúsmooth jazz‚ÄĚ and brash Americana, between Branford Marsalis and Aaron Copland, both being modes that normally sit outside the shifting tides of musical taste. As if to defy Billboard trends, since 1991‚Äôs Jungle Fever, Lee remains true to Blanchard, his melodies providing accompaniments that make Spike‚Äôs ‚Äújoints‚ÄĚ all of a piece; cinematographers come and go, social issues ebb and flow, yet Blanchard remains. In Spike‚Äôs New York, a simple waltz of brasses and ivories connects characters as seemingly disparate as Bamboozled‚Äôs TV-exec hypocrite Pierre Delacroix and 25th Hour‚Äôs white-collar drug dealer Monty Brogan, turning their ambles down Manhattan streets into poignant strolls through Spike‚Äôs consciousness. Yet critics and audiences, if we are to classify them differently, insist on pointing out Blanchard‚Äôs input as prime evidence of Spike‚Äôs failure to live up to his ‚Äúpotential‚ÄĚ as a filmmaker, his inability to see the ‚Äúsophistication‚ÄĚ of his 1989 masterpiece Do the Right Thing and follow his own blueprint for success. As if musical taste, of all things, could be considered indicative of a lack of sophistication; as if this mellow, derogatorily named ‚Äúsmooth jazz‚ÄĚ didn‚Äôt reflect what Spike‚Äôs critics had on their CD shelves. With only the slightest whiff of white superiority, they infer that Spike‚Äôs album collection is out of touch, and therefore, he must be as well.

Just as musical taste is as individualized and unaccountable as a predilection for shellfish or eggs-over-easy, Spike Lee‚Äôs films are as personalized as those of any American director working today‚ÄĒnot provocations as much as interrogations, with his questioning tactics only breeding further resentment rather than resolution. In my estimation, Lee has, since the turn of the millennium, been on the roll of his career. Not to diminish the daring low-fi spectacles of She‚Äôs Gotta Have It and School Daze, the staggering artistry and social significance of Do the Right Thing, Malcolm X, and Clockers, or the forceful emotional tug of Mo‚Äô Better Blues, Crooklyn, and Get on the Bus, but since the year 2000, Spike has been turning out grappling portraits of the America that he sees right now, where he stands. And just as he has begun to seemingly look more inward, and to take no prisoners while doing so, he has received some of his worst reviews and box-office numbers. What most critics don‚Äôt realize is that it is not their job to validate or invalidate the director‚Äôs quest, to accept or disavow smooth jazz ‚Äúmuzak,‚ÄĚ to choose to see or not to see what Spike Lee defines as contemporary political and social catastrophe. Too often acting as disablers, film writers are increasingly reticent to join in the search, and we should not be‚ÄĒas if we have all the answers.

Only 1999‚Äôs Summer of Sam, a depersonalized career low, was well marketed, thanks to its relatively safe content and easily sellable genre trappings. Unfortunately, terrified by an avoidably in-your-face visual campaign, New Line bungled Bamboozled‚ÄĒbadly. Even as mere provocation, it failed to make much of a stir, as the studio, surely baffled and terrified by its poster sporting a grinning black-faced pickanniny eating a mile-wide slice of watermelon, decided to just bury it and avoid controversy. The elite capitulated and ignored as well; all the easier to not have to wrestle with its demons, as Spike had. 25th Hour, on the other hand, a slightly more palatable adult drama, might have had an easier time finding its niche, although Disney‚Äôs Touchstone division realized that the film‚Äôs forthright contemplation of post-9/11 New York City didn‚Äôt necessarily translate into Oscar gold. Therefore, it became Lee‚Äôs second film in a row to be given a pathetic release‚ÄĒweek-long engagements at a smattering of theaters across the country and then a swift yank. Quickly, before anybody kicked up any dust. It‚Äôs all come to pass once again with Sony‚Äôs 13-screen dumping of this year‚Äôs She Hate Me, possibly Lee‚Äôs most confounding film, easy to watch and hard to swallow, big, sprawling, and ambitious. Like Bamboozled and 25th Hour, it‚Äôs a film as angry and confused as its audience, as conflicted and questing and corrupt as its protagonist.

Because Lee often wears his heart on his sleeves, makes sure you know when a point is being made, many deny the plurality of voices on display in his films. There are plenty of mouthpieces here, not just Anthony Mackie‚Äôs wide-eyed, professionally idealistic, personally dubious Jack Armstrong, and Lee is using almost all of them to create a latticework of contemporary American values, a landscape of ethical quandaries, some clearer than others, in which one decision affects the next in a vertically integrated tower of babble. Though his structure at times resembles a more classical narrative approach to Michael Moore‚Äôs studies of the inextricability of the personal and the political, Spike Lee‚Äôs tapestries are often shunned as being unfocused. How simple, easy, and unimaginative it is to say that he bites off more than he can chew rather than realize that the chewing is what keeps the artist‚Äôs mind going.

While one may write off the vagueness of the central connections between corporate greed and ever-shifting millennial family values, Lee sees an ethical tangle. She Hate Me is a hesitant, herky-jerky, and very genuine search for reconciliation between the public and the private, professional greediness and sexual neediness. Is it really a problem that he fearlessly stacks one social problem on top of another with growing narrative precariousness, or is it just that his critics are looking for the exact same thing that he‚Äôs looking for‚ÄĒanswers? That‚Äôs where we get the ‚ÄúSpike doesn‚Äôt even know what he‚Äôs saying‚ÄĚ remarks, an easy out for film writers. Corporate whistle-blower Armstrong is fired from his vice-presidency at pharmaceutical cartel Progeia and made the racially suspect fall-guy for the SEC‚Äôs investigation into the company‚Äôs book-cooking. Though no longer viable at Chase bank, Armstrong finds himself more than vital as a sperm bank, as his lesbian former fianc√©e, Fatima (Kerry Washington), works out a similarly insidious business plan involving impregnating not just herself but a seemingly endless stream of lesbians wanting to have babies at $10,000 a pop. It doesn‚Äôt stop there: the film continues to snake out in increasingly unwieldy ways, making room for bizarre flights of fancy involving larval clusters of animated sperm, an extended Brando bit by gentle mafioso John Turturro, and even a fantasy vignette reimagining the Watergate break-in on quite literal terms. It‚Äôs this last bit, seemingly the most extraneous in the bunch, that truly marks She Hate Me as a sort of carnival ride through what must have been its director‚Äôs semi-conscious meanderings at the script‚Äôs own time of conception. True-life whistle-blower and forgotten black security guard at the Watergate, Frank Wills, finds himself surrounded in a circle by ridiculously caricatured renderings of Ehrlichman, Haldeman, and G. Gordon Liddy, not to mention a Nixon-masked ringleader, all shooting their guns in the air in an unmistakably Texan salute and getting off on their own Caucasian cojones. The sequence‚ÄĒso stilted and otherworldly, so delightfully unnecessary, calling out American history-making as much as political corruption itself‚ÄĒand along with many of the film‚Äôs other goofy asides, makes the whole project into something more reminiscent of a freeform essay film than a comic narrative. What most delights is Lee‚Äôs sheer earnestness.

Is there a political filmmaker who uses less irony than Spike Lee? The inherent cynicism of this project, one which links sex and greed so explicitly, acknowledging the ongoing flow of cash and cum as inseparable, is negated by the director‚Äôs generosity of spirit and belief that his characters can navigate their way through such morally dubious terrain. Thus, something unexpected and rather beautiful comes out of all these pointed shenanigans‚ÄĒin Spike Lee‚Äôs world, there is hope for the future even amidst corporate slush-funds and window-jumping execs. Could Jack all along be impregnating these women for a greater purpose? It‚Äôs easy to see the slight naivet√© of the film‚Äôs sexual politics, the much-lambasted images of supposed homosexual women who will so easily spread ‚Äėem for some cock; but it‚Äôs difficult to understand that his own prostitution, in a sense, becomes his salvation and perhaps his path to produce something meaningful outside of a suffocatingly male-centric corporate mentality. An idyllic beach-side family scene at the close of the film provides a way out of the dark of contemporary America, and, miraculously, it‚Äôs by wholly embracing the shifting of family values.

Two mommies, two babies, one daddy . . . all of it overseen by Jim Brown‚Äôs proud elder-generation patriarch. It‚Äôs fitting that Spike Lee‚Äôs peculiar melding of his own liberal and conservative tendencies close his latest film, for Spike-bashing seems to be the great cinepolitical equalizer; he‚Äôs the one director that both the left, who see liking his films as a sign of regression, and the right, too offended by the blatancy of his attacks to bother watching, can roundly mock in high-fiving agreement. Feel slight discomfort from his beyond-Demme close-ups of actors staring straight into the camera, locking eyes with your own? Put off by the occasional shift in film stock and grain? Find the constant framing of modern African-American art work within the mise-en-sc√®ne overly imposing? Dismiss it all as the work of an angry black man who doesn‚Äôt know when to just quit complaining and be grateful that we let him direct.

Most of all, where She Hate Me purposefully confounds is in its status as a comedy. Spike Lee can‚Äôt ‚Äúdo‚ÄĚ comedy, as it is often said, when in fact, what he‚Äôs doing is problematizing the very limits and parameters of what we‚Äôre supposed to locate in comedy itself. Bamboozled being the ultimate example, Lee‚Äôs assumed ‚Äúcomedies‚ÄĚ don‚Äôt wish to provoke laughs as much as uneasiness, nervous titters rather than hearty guffaws. While working within Bamboozled‚Äôs sprawling yet strictly defined cause-and-effect comic narrative, Lee forces us to question what it is that we find funny. Dare we laugh at blackface in the year 2000? Even the digital-video gags surrounding that film‚Äôs gestating malignancy, the 35mm ‚Äúfire-truck red‚ÄĚ minstrel show, hit in the same manner, and hard. In Bamboozled, the truth hurts and no amount of canned laughter can save us from hell. And as if in response to that film‚Äôs terrifying closing advice, ‚ÄúKeep ‚Äėem laughing,‚ÄĚ She Hate Me dares us to find the humor in such corruption. Bamboozled ended in violent death and She Hate Me begins with gory suicide. That the bulk of each film takes on the guise of comedy only proves that Lee is not out to provide jokes; rather he‚Äôs searching for them right along with us.