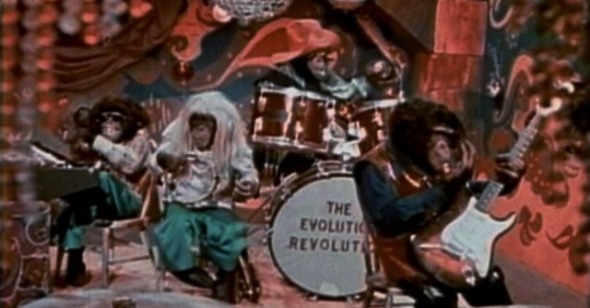 The spy genre‚ÄĒat least that variation which concerns cool-headed, gadget-proficient bachelor agents, exemplified by the Bond films and their various Sixties knock-offs (Our Man Flint, the very-enjoyable Deadlier than the Male, etc.)‚ÄĒmay have already reached the point where it‚Äôs spawned enough spoofs to outweigh its straight-ahead franchises; I‚Äôll cite Casino Royale, ‚ÄúGet Smart,‚ÄĚ Austin Powers, Spy Hard, The Man Who Knew Too Little, and Johnny English, and that‚Äôs just off the top of my head. But there‚Äôs one espionage send-up that, in its utter idiosyncrasy, is a shoo-in for the genre‚Äôs most bizarre reimagination‚ÄĒits free-associative lowbrow high-concept puts it in the same relationship to the spy movie that, say, Terror of Tinytown has to the Western.

Of course I am talking about Lancelot Link: Secret Chimp, the all-chimpanzee-cast spy serial/ studio-hack psychedelic bandstand/ Laugh-In-style variety show, which ran‚ÄĒinitially as a hour-long (!) Saturday afternoon block (mixed-in with Warner Bros. cartoons), then as a half-hour, Link-only distillation, on ABC-TV from 1970-1972. The program, whose entire run‚ÄĒit was inevitable, I suppose‚ÄĒhas now been compiled onto disc by Image Entertainment, followed the career of the titular Lancelot (chimp Tonga, voiced, with a side-of-the-mouth, sometimes-Bogart, sometimes-Walter Matthau delivery, by veteran voiceover man Dayton Allen), agent of A.P.E. (Agency to Prevent Evil), and his blonde bimbette partner, Mata Hairi (Debbie, voiced by Joan Gerber, whose Queens-inflected screech-for-help‚ÄĒ‚ÄúLaaaanthalot!‚ÄĚ‚ÄĒis as close as the series has to a catchphrase), as they foiled fiendish plots set into motion by C.H.U.M.P. (yeah, it stands for something too), whose operatives include scheming Sax Rohmer-style simians like Wang Fu and Dragon Lady (‚ÄúLovely but she‚Äôs wicked all the same,‚ÄĚ warns the raucous opening theme‚ÄĒprobably the series‚Äô most consistently funny gag is its straight-faced emphasis of female chimpanzees‚Äô alleged allure). This ‚ÄúAh-so‚ÄĚ Yellow Peril villainy (not to speak of the cowl-wearing sheik, Ali Assa Seen) could probably be construed as offensive, but considering that the show‚Äôs casting disarms one of the chief tools of racial caricature‚ÄĒmaking the Other seem less evolved‚ÄĒby making monkeys of everyone, I can‚Äôt imagine anyone taking too much umbrage.

This cannot be emphasized enough: every character in this series, all of them, are played by clothed chimpanzees‚ÄĒthe sole exceptions are the reluctant robot of ‚ÄúThe Reluctant Robot,‚ÄĚ and a remarkably sanguine orangutan who seems to show up in the periphery of many an episode‚Ä¶ always wearing the same checkered polyester blazer, at that! You will see chimpanzees driving miniature sports cars, be-sweatered chimpanzees fumbling through the powder on skis, chimpanzees riding Shetland ponies, chimpanzees atop camels, chimpanzees tobogganing, chimpanzees traversing the desert, chimpanzees kicking back in their mod apartments, chimpanzees chowing down in dockside dives‚ÄĒand, yes, chimpanzees rocking out! Lance goes undercover in a bubblegum psych four-piece in his spare time, The Evolution Revolution (their Doors-esque line-up includes Tonga fondling the frets of a guitar, backed by tambourine, drums, and keyboard‚ÄĒthough the tunes always somehow seem to feature prominent bass lines), who, diced up by kaleidoscopic cutaways, perform hits with titles like ‚ÄúRollin‚Äô in the Clover‚ÄĚ and ‚ÄúWild Dreams (Jelly Beans),‚ÄĚ music courtesy of commercial arranger Bob Emengger. This fare made Link an ideal lead-in for The Monkees when Nickelodeon revived both shows in the mid-Eighties‚ÄĒLancelot would again re-emerge on Comedy Central in the formative years when the network‚Äôs schedule was built around McHale‚Äôs Navy and CPO Sharkey reruns.

Lancelot was the brainchild of Stan Burns and Mike Marmer, alumni of the show‚Äôs nearest precursor, CBS‚Äô Get Smart (just off-the-air in 1970)‚ÄĒand it‚Äôs not difficult to imagine that Lancelot, with Link filling in for Don Adams‚Äôs Maxwell Smart and Mata Hairi as Agent 99, was created as a dumping ground for the team‚Äôs unused Smart gags. So, is it funny? The answer is a resounding ‚ÄúYeah, but‚Ä¶‚ÄĚ; I can‚Äôt think of a documented era in American popular comedy that‚Äôs aged into quite the fine pungency that the Sixties and early Seventies have, and Lancelot is no exception. Burns and Marmer‚Äôs first credited gig was with The Ernie Kovacs Show (a program that never shied away from breaking out the monkey mask), and they went on to pull pay from seemingly every major TV variety hour of the following decade-and-a-half, including The Steve Allen Show, The Dean Martin Show, and The Smothers Brothers Comedy Hour. The result is a knack for dialogue with the straining-for-yuks quality of a monologue throw-away, (‚ÄúC.H.U.M.P. will control the take-home chicken industry‚ÄĚ ‚ÄúOh, that‚Äôs terrible!‚ÄĚ ‚ÄúIt sure is‚ÄĒnow housewives will be forced to cook dinner.‚ÄĚ); the surrealist pizzazz of Kovacs takes hold only through the inherent insanity of the show‚Äôs conception.

Most of what‚Äôs really laugh-out-loud here results from the necessary limitations of that strange, strange conception: The funniest aspect of any given episode tends to be the contrast of the adjective-heavy narration and the general torpor with which the monkeys hit their marks, trotting along gamely, if ungracefully, in their constricting costumes (there is something singularly disturbing about how a chimpette‚Äôs gams look in tights), and looking anything but ‚Äúrelentless‚ÄĚ; also enjoyable are the voiceover actors dragging out their enunciation to match up with the lips of the gum-chewing apes‚ÄĒmost rely on crutch noises to fill in gaps, like Mata‚Äôs gruesome bleat of a laugh or the frequent ‚ÄúBwah‚ÄĚs of tweedy A.P.E. overboss Darwin. Oh, and did I mention there are lots of monkeys here, in the most precious little outfits?‚ÄĒwatch a full 281 minutes of them, and I guarantee this concept will strike you as funny on levels you‚Äôd never imagined possible.

Those whose appetites for all things Link aren‚Äôt sated by two discs brimming with clothed primates will be disappointed by Image‚Äôs release, whose only ‚ÄúSpecial Feature‚ÄĚ provides the less-than-alluring option of watching all the Evolution Revolution‚Äôs rave-ups back-to-back. For them, I would suggest a viewing of Washington DC-based cult-filmmaker and pop-culture ethnographer Jeff Krulik‚Äôs bemused 1999 documentary short I Created Lancelot Link (co-directed with Diane Bernard), available for free viewing at the filmmaker‚Äôs website, www.planetkrulik.com. The featurette follows the reunion, after ten-plus years apart, of series creators Burns and Marmer (both of who died in 2002); you can enjoy SPCA-rankling anecdotage (including a chuckle about the snipping of all the male cast members‚Äô members just days before the shoot), marvel at the show‚Äôs $1,000,000 budget, and then watch the two somewhat hazily try to recall why exactly they supposed making an all-monkey spy spoof was an idea whose time had come.