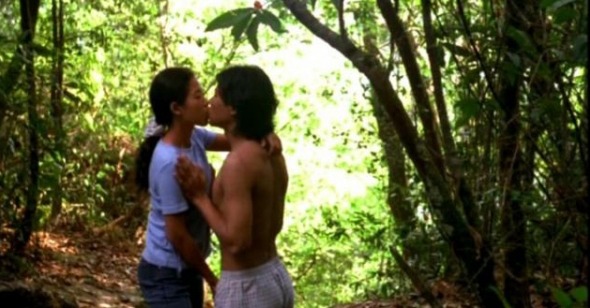 It seems that most of the handful of people whose opinions I really value were ardent about young Thai director Apichatpong Weerasethakul‚Äôs most recent film Tropical Malady; I remain unconvinced. I appreciated its quietude, the tender laziness of its love story, a scattering of images from the folkloric about-face of the movie‚Äôs latter half‚Äîbut this was more a matter of grudgingly recognizing artistic intent than anything like actual viewing pleasure. Watching it I was cagey, full of those thoughts that ‚ÄúSmart About Movies‚Äù cinephiles, antennae trembling for the next international cinema hotspot, aren‚Äôt supposed to have, thoughts like: ‚ÄúJesus, I wish this had been over 30 minutes ago.‚Äù

Now, I‚Äôm pragmatic enough to recognize that at least half of what makes a languorous, tone-and-texture movie like Tropical Malady‚Äúwork‚Äù or not work for me has, in fact, nothing to do with the text itself. Major factors include: the time of day I‚Äôm watching, how much sleep I‚Äôve gotten the night before, if I‚Äôm at home or at a theater (if I‚Äôm at a theater, who‚Äîor in the case of most NY repertory houses, what‚Äîis sitting next to me?) my alcohol and caffeine consumption of the last couple days, the state of my sex life, MLB goings-on, etc. Of course this is always a factor in movie watching, but the more serene a film is, the more serenity it asks from a viewer. To my thinking, so much depends on if it‚Äôs possible to synch (or sink) your biorhythms into the pacing of something like Tropical Malady‚Äîa director has to be a bit of a seducer to convince me to do so, to make me want to time my breath up to their movie as I might do lying in bed with a loved one.

Blissfully Yours, Weerasethakul‚Äôs second feature, got me. I‚Äôm not sure at what point in the viewing (early a.m., a good night‚Äôs sleep behind me, at home, stone sober, sex life lousy, Cincinnati Reds 24-17 [but playing poorly]) the film‚Äôs imagistic alchemy kicked in‚Äîthe opening ‚Äúexposition‚Äù had seemed interminable; the movie almost makes a joke of its drawn-out pacing, slotting its opening credits 45 minutes into the runtime‚Äîstrange, yes, but not so improper considering how little story gets put across in those minutes, about 20 of which are comprised of the view from a moving Toyota Corolla‚Äôs front and back windshields. (The film‚Äôs original conception had been to run in real time, at three hours; it was scaled back, though not greatly.) But I watched on, the musique concr√®te of the car‚Äôs engine and those constant glistening insect noises gradually lulled me along, and something happened‚Ä¶

There is the gesture of a narrative in Blissfully Yours‚Äîthe film develops a small cast of characters whose relationships are only gradually filled in, and remain teasingly inarticulate: Orn (Jenjira Jansuda), middle-aged landlady, tightly wound and a bit of a nag, married, once had a child who drowned; Roong (Kanokporn Tongaram), still filling-out adolescent woman, sweet-spirited, factory employed at hand-painting figurines; Min (Min Oo), twenty-ish, a stolid-but-gentle Burmese immigrant, irritated by his full-body skin rash, not too bright. In the film‚Äôs first scenes Orn introduces Min, who plays mute, to her doctor, saying he‚Äôs a cousin from the country and angling for a (probably illegal) work permit. Roong and Min are revealed to be involved in some sort of romance that seems very fresh‚Äîhe‚Äôs especially shy about sex, and both seem to be nudging out the parameters of their new thing (each demurely commands the other ‚ÄúDon‚Äôt look‚Äù when they‚Äôre undressing). In one of his childishly illustrated journal entries, which are superimposed onto the film, he says something about her having a ‚Äúboyfriend.‚Äù

Everyone evacuates the city of the film‚Äôs early scenes (Khon Kaen, in Northeast Thailand) to spend their afternoon in the forest‚ÄîRoong and Min go together, for a picnic, and Orn later drops in on them in flagrante delicto. The coincidence is only faintly jarring; the movie drifts on. We learn through his voice-over that Min was a fugitive from the law in Rangoon, that he has a son back home, that he possibly picked up his rash hiding from the police in a septic tank. Min sleeps, Orn cries over something‚Ä¶ her husband? Her child? Herself? And that‚Äôs all.

Movie watchers can neatly be divided into two types: those who feel like a film requires a discernable ‚Äúpoint‚Äù and those who don‚Äôt; chances are you know in which camp you fall. Inasmuch as Blissfully Yours has a point, it is this: the quality of sunlight shining through water or filtered through a forest‚Äôs canopy, the meditative quality of sex outdoors during a perfect day, the so close, so faraway sweet sadness of lying beside someone. In intimate moments most especially, these characters never seem to connect with one another, but not in that po-faced ‚ÄúAh-but-we-are-all-adrift-in-this-modern-world-of-factories-and-Toyota Corollas‚Äù way. Everyone‚Äôs just off, wrapped up in their own mysterious thrall, which doesn‚Äôt seem so fatal.

This is some profoundly tactile, instinctively sensual moviemaking, never sniggery or doggedly fixated about sex. Toward the movie‚Äôs end, there‚Äôs a moment where Roong gently fondles the genitals of her sleeping lover; it plays like a passage of D.H. Lawrence‚Äîwith artistry enough to show up grubby artcore like 9 Songs for the chic stunt it is. Also worth appreciating is the film‚Äôs eschewal of shopworn sex roles: having seen plenty enough score-settling coming-of-age dreck in which inexperienced young girls are lured into joyless, rutting deflowering by manipulative older ‚ÄúI‚Äôll take it out if it hurts‚Äù sleazebags, it‚Äôs a relief to see something like Min and Roong‚Äôs trickily felt-out courtship, anchored by her unabashed pleasure in touching. Peeling skin and aching hearts aside, what I retain of Blissfully Yours (the ecstasy of that title!) is those moments in which the actors shimmer with the joy of just having a body. It takes a sterner viewer than I not to share that pleasure.