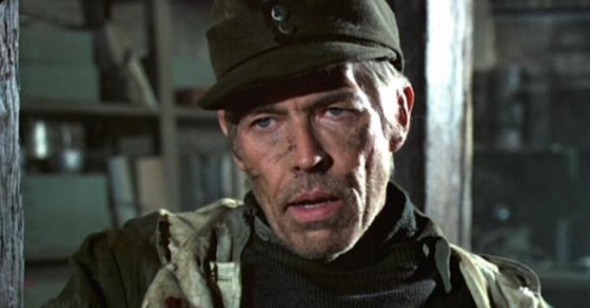 It‚Äôs surprising to think that Cross of Iron is Sam Peckinpah‚Äôs only categorizable ‚Äúwar‚ÄĚ film‚ÄĒthough Major Dundee comes awfully close. The reason is obvious: in a filmography hectic with so much shooting‚ÄĒeveryone packs heat‚ÄĒand dirt-caked male bonding, these movies winds up feeling like war, and so The Wild Bunch‚Äôs climax, in many viewer‚Äôs minds, somehow bridged the Old West and Vietnam in 1969. So: the world is still death-infested, men are still hard-wired for killing‚Ä¶ What distinguishes Peckinpah‚Äôs ‚Äúreal‚ÄĚ WWII story from his movies of peacetime warring? Only that diplomatically sanctioned combat is much, much bigger, louder, dirtier, bleaker, and blacker than anything his other films imagined.

It‚Äôs a maelstrom of a movie. The dominating logic in the editing of warfare‚ÄĒculled from an 89-day shoot‚Äôs miles of footage‚ÄĒis percussive rather than informative. Impact trumps information, as different calibers of artillery rumble in basso continuo; the spatial relationships between combatants or the geography of their melees ranges from muddled to indecipherable, depending on the scale of the fight. The result creates a degree of ambivalence in the viewer: who knows who to cheer on when you don‚Äôt know who‚Äôs doing what to whom? The film‚Äôs centerpiece battle moves with such a stirring flicker that it‚Äôs difficult to notice how garbled its terrain is; in it, a German platoon led by James Coburn‚Äôs upright, harassed Sgt. Steiner, uninformed of a full retreat by a snide superior (Maximilian Schell), are submerged by a surging Russian army on counter-offensive. The Germans fall back into a dilapidated factory, into a dingy tunnel and, suddenly‚Ä¶ out onto a hillside, somehow safe from the battle? Did they flank the Russians? Teleport?

Trying to fall back and reconstruct the logistics of what‚Äôs just happened is about as impossible as trying to draw Charles Bovary‚Äôs cap as it‚Äôs described on the second page of Madame Bovary (try it), and one can argue that Peckinpah was interested in telling a story about war as something that beggars articulation, just as Flaubert was interested in probing the limitations of the word (‚ÄúHuman language is like a cracked kettle on which we beat out tunes for bears to dance to, when all the time we are longing to move the stars to pity‚ÄĚ)‚ÄĒfor the passing of time reveals the man reductively referred to as ‚ÄúBloody Sam‚ÄĚ more-and-more as a poet. One less susceptible to the romance of artist-heroes might suggest that Sam‚Äôs reported on-set benders on 180-proof Slivovitz and powder hogging off the editing table may‚Äôve been the deciding influence of this foggy war. And there is the fact that Peckinpah had far less arms and armor than expected to work with on-shoot, and no real air force, which required some tricky cutting for epic effect. Whatever the case, it‚Äôs one of those ripe ironies of film history that any aesthetic advance is an invitation and that, if he cannot be held directly responsible, we can still draw a pretty clean line between Peckinpah and the blizzards of nonsensical beauty from Tony Scott, Michael Bay, and the rest usually criticized with the less-than-descriptive catch-all pejorative ‚ÄúMTV-style editing.‚ÄĚ

Hen‚Äôs Tooth‚Äôs fine 1.78:1 transfer of Cross of Iron provides a much-needed correction to their previous, cropped release. Here‚Äôs to hoping it helps to restore an unquestionably significant effort by Peckinpah to its proper place‚ÄĒit‚Äôs heartening to watch Bring Me the Head of Alfredo Garcia‚Äôs spike in reputation‚ÄĒthough where Cross will finally settle in his body of work is rather difficult to say. There is much that is fascinating in it, and nearly as much that is not; the merely ludicrous (a cherubic Russian lad, adopted by the platoon, who recalls the most mawkish passages of Sam Fuller) competes with the wonderfully lunatic (the gut-churning cut-away detail of a corpse smushed in two by a tank tread; a stumbled-across outpost of buxom Russian soldierettes too undisciplined to play proper sirens; a trooper picking a sprig of lavender just before an assassination.)

Sorely missing is the director‚Äôs gallery of picturesque goons to dapple and embellish his frame‚ÄĒthe infantry under Sgt. Steiner are distinguishable from one another, but very little more. There‚Äôs an attempt to create something equivalent to earthy, pull-my-finger camaraderie, but Peckinpah‚Äôs international cast never seems to cohere in the best bit-player fashion of that famous peckerwood gallery of Strother Martin, Warren Oates, Ben Johnson, L.Q. Jones‚Ä¶ Still, I must confess that I admired the ungainly entry of a desperate homoeroticism into Peckinpah‚Äôs all-male world, as in the quelling of one soldier‚Äôs cabin fever outburst by a lunging kiss from a comrade (also: dapper Fassbinder actor Roger Fritz appears as a blackmailed gay officer‚ÄĒ‚ÄúYou do like Biarritz, don‚Äôt you?‚ÄĚ).

Some of the cast‚Äôs failings might be attributable to the script, written by Julius Epstein, James Hamilton, and Walter Kelley, adapted from Willi Heinrich‚Äôs novel The Willing Flesh‚ÄĒyou know a movie‚Äôs in a bit of trouble when anyone says their character description aloud, as Schell has to: ‚ÄúI‚Äôm a Prussian nobleman!‚ÄĚ But fine performances slip through; the best bit of actorly shorthand is courtesy David Warner‚Äôs thoroughly defeated officer Keisel, sunken, diarrheic, and perpetually draped over the back of a chair. He has some dismal scenes to slog through with an anomalous, autumnal James Mason, but retains a stoop-shouldered dissipation that holds far more conviction than the pithy fatalisms the screenplay asks him to exhale (‚ÄúWhat will we do when we lose the war?‚ÄĚ ‚ÄúPrepare for the next one‚ÄĚ). He even manages to save his particularly leaden goodbye scene, flopping back into a motorcycle sidecar, making his final salute like he‚Äôs throwing something away.

To return to the disc itself: a commentary track is provided by Stephen Prince, apparently the author of a Peckinpah book‚ÄĒhe‚Äôs dutiful, thorough in his comparisons between the film and its source material, ever-ready with historical detail, slavishly auteurist, and nearly interminable. Listening to this movie dissected and classified according to themes made it seem paltry; I had to turn Cross of Iron‚Äôs sound back on to remember what a grumbling, angry thing it was; I think Peckinpah may‚Äôve been the man to film C√©line (or at least to take an interesting crack at Castle to Castle), if only for his abstract political despair, and for the way he sections so many of his bunker dialogues with cut-aways of blossoming explosions, like the violent partitioning of the writer‚Äôs ellipsis.

The film concludes on an appropriate note of bracing psychosis, as Steiner and his Prussian nemesis walk side-by-side into certain-death assault, and Coburn unleashes that long, Cheshire Cat smile and starts guffawing his head off, a gaping, gut-deep laugh. It‚Äôs the sort of thing that prompts an exchange of baffled looks when the credits roll, as Coburn keeps belly-laughing, right over the archival photography of hanged children, of Belgrade, of Vietnam‚ÄĒVon Trier‚Äôs American movies may come to mind, with their ‚ÄúYoung Americans‚ÄĚ montages‚ÄĒand then even a quote from Brecht‚Äôs anti-fascist parable ‚ÄúThe Resistable Rise of Arturo Lee‚ÄĚ!

Not so much concluding his films as exploding them, negating them in a crackle of squibs, is a familiar Peckinpah tactic‚ÄĒenough so that Monty Python could memorably parody it as early as 1972‚Äôs ‚ÄúSam Peckinpah‚Äôs ‚ÄėSalad Days‚Äô‚ÄĚ skit, which showed the director‚Äôs attempt to film a pastoral English garden party turning apocalyptic (‚ÄúPretty strong meat there from Sam Peckinpah‚ÄĚ). But Coburn‚Äôs inappropriate outburst, his final, echoing explosion of wild vitality, is more audacious than mere death; it sets the movie rocking with tremors of the absurd. And why not? Could anything be more ridiculous than rooting for the German army to slaughter the Soviets? For the Soviets to slaughter the Germans? Steiner starts laughing upon seeing his idiot superior spooked by a stray shot, but that‚Äôs not really what‚Äôs funny. Maybe he‚Äôs just hit on the punchline to some cosmic joke. Or maybe he‚Äôs just grasped this movie‚Äôs definition of war: sound and fury symbolizing sound and fury.