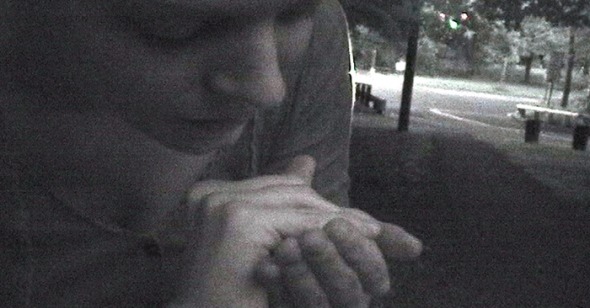 The World Is Not Enough
By Andrew Chan

Imagine each of us arrives in this life equipped with a kino-eye, and that we‚Äôre given the task of producing a mix-tape of our favorite sights and impressions. Michael Almereyda has turned in his first draft of the assignment, Paradise, and it‚Äôs a film intoxicated by the exponential possibilities of its form. Bookended by images of moving walkways‚Äîthe obvious symbol of time propelling us relentlessly forward‚Äîit isn‚Äôt so much obsessed with detailing the way we live now as with the intricacies of nowness itself. Scene after scene, the filmmaker plunges us in medias res, and we wait for a surprise, a punchline: a boy accidentally falling into a swimming pool; a Sonic Youth concert stopped short by technical difficulty; drops of rainwater fanning out on an airplane windshield. The question, though, becomes: how much curiosity can we muster for people we don‚Äôt know, and for everyday events we may feel we know all too well? Repeated viewings of Paradise reveal a transfixing and richly patterned patchwork, but on the first try it feels like alien territory, and it can be difficult to find one‚Äôs way in.

It‚Äôs helpful to consider Paradise first as a slightly more challenging offshoot of 2005‚Äôs William Eggleston in the Real World, a documentary that found Almereyda shedding the tongue-in-cheek cleverness of his first decade of filmmaking (which culminated in his exhilarating, schizophrenic update of Hamlet in 2000), and beginning to adopt the great photographer‚Äôs mission to make art out of every ordinary thing. This tension between aesthetic ambition and surface modesty is registered within the first few moments of Paradise, when the opening credits couple the film‚Äôs Dantesque title with a humbler admission: ‚ÄúWork in progress.‚Äù But the disclaimer isn‚Äôt meant to imply that the film hasn‚Äôt already been lovingly crafted; instead, it undermines the notion of a totalizing work of art in which every choice bears the mark of perfect inevitability. In the post-Eggleston world, where even the most quotidian sights cry out for artistic representation, the pretense of finality has been rendered quaint.

If Paradise is intended as its maker‚Äôs masterpiece (as Almereyda has already intimated in interviews), then it brings to mind the very categorizations it initially seems all too eager to elude, ultimately locating its canonical aspirations both within and beyond traditions of ephemera. As a self-serious artwork, this project‚Äîlike the earliest instances of diary filmmaking in the 1960s‚Äîis enabled by the heightened attention our modern era pays to artists‚Äô and authors‚Äô notebooks, those leftover scribbles and doodles that often reveal a less-rehearsed master, processing the world with his guard down. In this case, it seems appropriate that these quick-and-dirty sketches should be positioned as the centerpiece of a career that has always straddled the boundaries between genres, and between pop and art sensibilities. On its lower-brow flipside, the film also suggests a kinship between home movies and more recent phenomena like reality shows and YouTube videos, resulting in a mash-up of largely domestic forms which Almereyda endows with the mobility of a travelogue.

Paradise is indeed international in scope, setting its sights on Asia and the Middle East as well as familiar American terrain, the latter of which is frequently shot from a moving vehicle. There are times when Almereyda‚Äôs apparent desire to transcend his own touristic gaze seems, at best, na√Øve, since the worldview of any diary film is necessarily hemmed in by the director‚Äôs interests, preferences, and cultural blind spots. But this inescapable short-sightedness is balanced out by one of the film‚Äôs main strengths: its refusal to either funnel the world through catchy bits of narrative, or boil it down to a cluster of hot-button issues. Far from placing us in greater proximity to its diverse settings, the film restores to us the sense of our world being distant and unwieldy‚Äîa fact that has been imagined away in our globalizing era.

Central to this accomplishment is Almereyda‚Äôs resolutely unbeautiful approach to digital video, which for him is not the crisp, hyper-real format it has become for many other filmmakers. The camera may seem as natural to him as any of his other limbs, but here, as in the Pixelvision of his 1992 film Another Girl, Another Planet, videography often makes perception a struggle for the audience, exemplified in a scene in which a woman on a beach shifts back and forth between being a solid figure and a swarm of pixels. The sound recorded on Almereyda‚Äôs in-camera microphone has the same rough, unvarnished texture of the images. Motion blurs, objects rush in and out of focus, quick zooms unsettle our sense of place, and the aesthetic properties of the medium sometimes seem to drift further and further out of reach, accessible only through our patience and hard work as close viewers and listeners.

So what, finally, should be our entry point into this mysterious compilation? Almereyda has discussed his wish to shape these scenes with the instinctive energy of pop music, but many of them‚Äîsometimes for better, sometimes for worse‚Äîplay without a hook. There certainly is no scarcity of movement and behavior onscreen, but it rarely coalesces into the kind of sharp anecdote that lodges in the memory. And though Almereyda doesn‚Äôt shy away from the human subject, he also never engages with personalities or penetrates psychologies enough to give us even the slightest character sketch with which to identify. In the absence of story, character, and temporal specificity, the viewer who develops any amount of curiosity about Almereyda‚Äôs material will quickly move toward seeking out its buried juxtapositions. This isn‚Äôt a task aided or even explicitly encouraged by the film itself, since very little here is spelled out in the manner of Eisensteinian montage‚Äôs bold metaphors and arguments. But for the attentive audience, Paradise offers a spectrum of experience in which discrete vignettes‚Äîseparated by geography, sociopolitical context, and both historical and cinematic time‚Äîcan resonate with each other in unexpected ways.

Take, for example, two strands that run throughout the film‚Äôs images: first, Almereyda‚Äôs fascination with the humor and wide-eyed wonder of youth; second, his interest in chronicling the natural and the man-made disasters of our time. Mix these two ingredients together and normally you would have a recipe for some heart-tuggingly apocalyptic propaganda, but it‚Äôs Almereyda‚Äôs style not to editorialize or even bat an eye. The film is so dizzyingly in-the-moment, so free of narrative explanation and self-justification, that this obvious link between children in jeopardy and modern-day violence is never brought home with any immediacy, and only emerges upon reflection. Even with the film‚Äôs brief running time of eighty minutes, it feels as if the segments representing these two themes have to echo across great distances before they finally match up with each other. (Hence, only later do such images as a young girl, safe inside her home in front of the TV as a storm brews outside, and a mother teasing her crying newborn, ‚ÄúIs life all that bad already?,‚Äù register as dark premonitions‚Äîwhen we‚Äôre shown dark clouds, the Iraq War blaring on the news, yellow caution tape at Virginia Tech, the message is clear: this is the world the young will inherit.)

From the film‚Äôs steady, unflappable tone, one might imagine Almereyda playing it tough, informing us that catastrophe is a constant of human experience and that shock is a response of the immature. As if to maintain equilibrium among all its various parts, the film privileges the muted, the ambiguous, the private‚Äîa method that rarely yields to the rawer extremes of emotion one feels in a life. Along with any hint of the dramatic, Paradise also throws out the laws of cause-and-effect, and thus has no way of intellectualizing the sad state of the world or putting forth recommendations for its improvement. What it does well, though, is watch: often watching others watching, as if through a shared gaze we could catch glimmers of paradise behind the curtain of the mundane.

Such active perception, ideally, would last a lifetime, and there‚Äôs a sense that the film itself is inexhaustible. Scenes are separated by a cut to black, but the audio stays unbroken throughout most of the film, emphasizing the continuity, simultaneity, and vitality of life carrying on in every part of the world. This chain of half-formed incidents, ruminations, and reveries keeps up until the closing scene set at Niagara Falls, where nature finally overcomes us, clouding Almereyda‚Äôs lens with drops of water. Art rushes in to meet reality, as a rare swell of music plays, and a feeling of suction and compression draws us inexorably to the end. Moments like these catch us off guard with effortlessly poetic gestures, and elevate a project that is sometimes disaffecting in its refusal to argue for the uniqueness or beauty of what it captures. Paradise has some value as a time capsule, but the greatest pleasure it offers is an emotional experience almost entirely devoid of the tropes and conventions that represent pathos in the movies. Conjuring a sustained mood from the residue of our millennial dread, the film throws its glance on the very ordinariness of the human organism, partying and lamenting its way into the future.