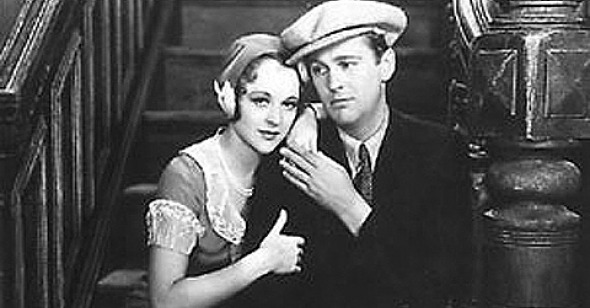 Waiting for the subway on my way to see Frank Borzage's Bad Girl, a flabby 12-year-old tried to hustle me—"Excuse me sir, I'm collecting donations..." is all she got out, mechanically running through her rehearsed lines while pushing some crumpled, much-handled pamphlet in my face. I waved her off, then watched out of the corner of my eye as she returned to a monstrously obese mother with a gaggle of kids buzzing around her—all I heard, very serious, was: "I'm gonna beat your ass if you don't have ten dollars by Queens Plaza."

That sort of poverty, Stephen Crane poverty--mean, degraded, heartless--doesn't occur in Frank Borzage's films; his noble poor are so over-endowed with decency that they have to go out of their way to deprecatingly hide it, like Eddie, the leading man of Borzage's 1931 Bad Girl, whose on-tap snideness is only a distraction from his capacity for sacrifice. Borzage films are sheltered, but I do not use this word interchangeably with "naive." Though often set amidst dire need, with much of his strongest work overlapping the Great Depression, true soul-broken pennilessness is rarely more than an off-screen threat, a hoarse voice screaming down the tenement steps in Bad Girl, the "what if?", should our protagonists lose sight of their own inherent goodness. It's impossible for me to say if the sort of lower-depths gentility filmed by Borzage exists, if it ever existed, though it makes for such lovely nostalgia now that the convenient typage of the Twenties and Thirties proletariat picture has been inverted, with the underclass fast-food bloated into grotesque dimensions shaming the stock fat-cat plutocrats of yesteryear and the bosses gym-lean, carrying less bodyfat than Walker Evans's subjects.

Borzage's sustained vision heavily invests in the handsome dream of everyday decency, as displayed in Bad Girl, playing this weekend at MOMI alongside three other worthies from the director's filmography. It's Borage's last film for Fox, where he'd enjoyed his career's boom years in the late Twenties, and it garnered him a second Best Director Oscar, alongside a statuette for Edwin Burke's screenplay. The picture draws from Viña Delmar's eponymous autobiographical bestseller, a tale of flapper promiscuity published in 1928 and already successfully transplanted onto Broadway. The original text was apparently something of a taboo-buster, smacking with sex--what remains in Borzage's film is handled with a discretionary ellipsis: our heroine spends a pre-wedlock night in her husband-to-be's apartment--but when we rejoin them after a kiss-and-fade, they're chastely napping in a chair, a safe distance from his looming bed (not that they haven't had plenty of time for mischief in the meantime...). Borzage's next project, an appealing 1932 adaptation of Hemingway's A Farewell to Arms is, by contrast, practically pornographic.

The young subjects of Bad Girl—shopgirl "Dot" (short for Dorothy, played by Sally Eilers) and her paramour, Eddie (James Dunn)—are consciously "modern" types, speech bustling with slang, wary and weary of the opposite sex, but beneath the crackle of their patter lies a bedrock of petty bourgeois values; whatever "badness" may have existed in Delmar's book is burnished to a chaste glow. They meet cute at Coney Island, glimpsed in its heydey as a white light middle-class Xanadu, where Dot's dearest friend Edna (Minna Gombell, as a peroxided downtown Dorothy Parker) identifies Eddie as that rarest of specimens, "a fellah who won't flirt"--up until this point, the girls have jabbered on about nothing besides what absolute wolves men are.

Anyhow, Dorothy gets to talking to Eddie on a dare, and she's fascinated by this phenomenon, never having met such a thoroughly miserablism-pickled killjoy before. As played by crossover New York stage star Dunn (in his first major role), Eddie's not statuesque or conspicuously handsome... but talk's the coin of the realm in this picture, and talk he can, slicing out his line readings with a New York-Irish impudence that recalls Cagney, neatly deflating the girl's line on masculine rapacity ("You dress to show off the curves of your body. If you don't want guys to salute you, put down your flag") and the banal day-trip entertainments enjoyed by everyone at Coney ("Everybody yellin' their heads off and thinkin' they're enjoying themselves"). It's no exaggeration to say that the film's merits lean heavily on the way Dunn handles his patter, and contemporary viewers seem to have agreed--the pairing of Burke's writing and Dunn's delivery was successful enough to reunite them in three other Thirties films, Sob Sister, Dance Team, and Shirley Temple's Bright Eyes.

Dottie, for one, is hypnotized by Eddie's rap; after seeing so many guys on the make trying to sell her the same chintzy urbanity, Eddie's fount of sarcasm seems like an oasis. He walks her home to her tenement, she hanging off his every pessimism. It's not long after that she spends the night, and an impulse marriage follows immediately thereafter. The couple learn that they're not so different--a little scared of the opposite sex; streetwise, hard-nosed kids, brought up in coldwater flats, both parents dead--and Eddie, to his surprise, learns he's not such an asshole after all. He's full of fine feelings but "when it comes time to puttin' 'em into words, I only say something sarcastic and mean"; probably the movie's funniest moment comes just a beat later, when he answers a phone call from his beloved with the fond salutation "Hello, stupid."

That difficult space between best intentions and self-representation is the hump that the couple struggle with for the better part of the narrative. Dot finds out she's pregnant, but she's afraid to tell Eddie because he's saved all his money with a dream of going into business for himself, and her withholding establishes the pattern of the movie's drama: these kids don't have a single insurmountable problem, but their newlywed's fear of the still-unknown other convinces them time and again that they do. Dot doesn't tell Eddie that she's pregnant to spare his dreams, saying instead that she'd like to return to work with the secret intent of paying for the baby's delivery herself. He interprets her request as dissatisfaction with their one-room apartment, and "shoots the works" on respectable new digs, leaving them in the same financial pickle. Eddie wants the baby, Dot wants the baby, but she thinks he doesn't, so she acts like she doesn't, and so on and so on, in an ouroboros circle of increasingly-bitter incomprehension.

Helping them through these choppy straights is the benevolence that's sparked in seemingly everybody by the prospect of a right-headed young guy like Eddie trying to get a start in the world. He takes a ten-dollar-a-round slot in the boxing ring to earn some extra cash; as soon as his lug of an opponent finds out that inexperienced Eddie, who's taking a pounding, only stepped into the ring for his baby-to-be, the bruiser's holding Eddie up through round after round, making small talk about his own kids. Eddie goes to petition a famous doctor (it's one of the conceits of both this film and Little Man, What Now?, a sort-of sister Kammerspiel to Bad Girl, that top-line obstetricians are household-name celebrities) to handle his wife's delivery with the little nest egg he's managed to set aside, and he breaks down in desperation; the doctor does the job for free, and leaves the newborn a check to start his savings account with, for good measure.

Bad Girl is among the less ornate works on display in this retro—its budget is a fraction of what Borzage was accustomed to; the film is an early sound picture, and plays like one, complete with the over-careful blocking and fairly staid camerawork. I hope I am not being belittling to say that the movie has a sitcom-like aspect—that is to say, there is much in it that predicts the urban, working-class marital sitcoms of the Fifties: the married couple's back-and-forth that camouflages a deep, loving matrimony; Eddie's verbal sparring with ever-present intercessor Edna (the similarity of their names belies a similarity of personality--cranks with hearts of gold), setting the mold for cracking-wise neighbors to come; the domestic misunderstandings ironed out before the credits roll.

What this proves, as in so much of Borzage's work, is not so much the outmoded morality of bygone Hollywood (though no-one should deny that's present), but also just how much human territory popular moviemaking has ceded in the last seventy years. "Sitcom" is the ultimate pejorative to the art-smart set--see Francois Ozon's infantile kicking-at-the-pricks film of that name—but try to find a recent major American film that's treated the lives of the working class with as much firsthand knowhow, evenhandedness, and blemished decency as Roseanne—hell, as The King of Queens. Frank Borzage is almost certainly guilty of sanitizing the men of America's great unwashed, but I don't believe the contemporary screen shows greater maturity by ignoring them altogether.—NICK PINKERTON