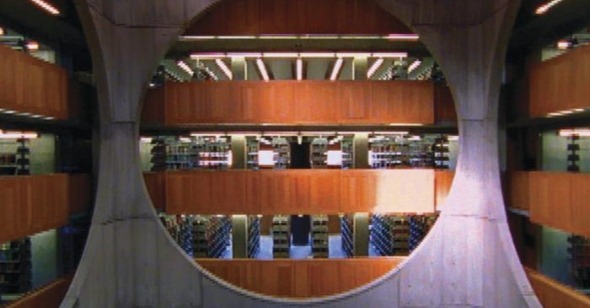 In the Name of the Father
by Jeff Reichert

“All that we desire to create has its beginning in feeling alone.”

The story goes like this: in 1974, renowned architect Louis Kahn died of a heart attack in a bathroom in New York’s Penn Station. Following in Antonio Gaudi’s footsteps, Kahn was alone, penniless, and went unrecognized at the morgue for several days. Just back from a trip to India where work was underway on his Institute of Management in Ahmedabad, he had curiously crossed out the address on his passport, which accounts for the delay in identification, but also for the very existence of this film. For director Nathaniel Kahn, offspring of Kahn’s second extra-marital dalliance, and sole child of his “third” family, black scratches on a passport mark the core of a family legend that his mother Harriet stills holds dear—she believes they mark the end of Kahn’s legal marriage and the beginning of a new life with her and his son. Notice in the film’s title the suffix A Son’s Journey so often occluded from discussion of the Academy Award–nominated documentary My Architect. The expanded title manages the neat trick of encapsulating all that is worthwhile and worthless in the current buzz film of the literati. Instead of a paean to the works of a master architect and an unraveling of his life story (which is, to be sure, quite fascinating), My Architect is hamstrung at every turn by displays of unbridled narcissism and lowest common denominator documentary film tactics in the form of the grafted-on Son’s Journey.

I can only stand so much awkwardly delivered voiceover about making peace with a barely-known father figure before growing a little skeptical of a documentary’s motivation, especially when said figure is a luminary on the level of Louis Kahn. Having a father of my own ensconced and available in South Jersey might render me somewhat unqualified to pass judgment on this point, but does Nathaniel really believe making a film like this is going to lead him to some kind of answers? And if so, what are the questions? And how does one justify a documentary carefully peppered with talking-head architectural superstars (I.M. Pei, Frank Gehry, Phillip Johnson), and confrontational interviews with dear old mom as a means to that end? As I watched Nathaniel roller blade nonchalantly across the main pavilion of the Salk Institute in La Jolla, I couldn’t help but feel as though this elaborately constructed “journey” conceit was intended to lead somewhere else. By the time the film was over and I’d had a chance to digest all the unnecessary pillow shots and popular music cues, the whole project seemed even more suspect.

“Turn to feeling and away from thought.”

At about the film’s midpoint, Nathaniel visits the Point Counterpoint II (a barge Kahn constructed as a floating performance space for the American Wind Symphony) and its captain/conductor Robert Boudreau. Before we meet Boudreau, Nathaniel notes in voiceover that he has not informed the captain that he is Kahn’s son, setting the stage for a tearful revelation, all cleanly caught candid camera-center. There’s a difference in documentary filmmaking between getting lucky, subtly creating the necessary preconditions for capturing something worthwhile, and outright manipulation for a desired effect. When manipulation is couched in overall exploration of the artifice of the documentary form, the results can be illuminating. Traveling the opposite path lowers documentary filmmaking to the level of My Big Fat Obnoxious Fiancé. These distinctions may have never been more pertinent—2003 was “the year of the documentary” after all. Contrast Kahn’s shameless manipulation of Boudreau with an interview given later in the film by Bangladeshi architect Shamsul Wares who grows tearful in the process of explaining the import of Kahn’s massive Dhaka Capital complex to the emergence of the newly independent state. This moment is refreshing for its transparent honesty, and captures succinctly the potential impact a monumental work of art can have on an observer. Louis Kahn’s work in Dhaka was a leap of faith and an act of extreme generosity that captured and still represents the spirit of a nation. Because Nathaniel spends most of his time carefully examining his navel, what he has given us is much, much less.

“One may say that architecture is the thoughtful making of spaces.”

One could say the exact same about filmmaking. The greatest of film artists transcend mere faculty with narrative structure and create meaning with every inch of on- and off-screen space, forming a symbiotic relationship between what is “happening” in a film, and how that is displayed for the spectator. Documentary filmmaking often gets a free pass in this regard—who has time for aesthetics when it’s all happening right now? Nathaniel, luckily for us, frames his “quest” around visits to his father’s most famous constructions, rendering them in 16mm with a pleasant, painterly eye. It might have been nice had he further probed the spaces to really explore what we, as an audience, stand to gain by a seeing a cinematic work about an architect, but either a paucity of means, or paucity of ideas leaves his compositions largely static. The most dynamic view offered of Kahn’s work is a digital model of a planned synagogue never built. Archival footage of Kahn leading a master class on materials finds him relating one of his favorite lessons: “I asked the brick, ‘What do you like, brick?’ And the brick said, ‘I like an arch.’” Nathaniel might have done better by his father and asked the same of cinema.

“The man is always greater than his works because he can never fully express his aspirations.”

My Architect: A Son’s Journey is a battle for supremacy between the architect in the film, and the architect of the film (who makes more than his fair share of appearances on-camera). Thankfully the former burns brightly through the haze of calibrated neuroses and confrontations—enough to make My Architect worthy of recommendation. To hear Kahn speak is the architectural equivalent of a live author reading Notes on the Cinematographer. I’ve structured this review around quotes from a lecture Kahn gave in 1960 to try and capture a sense of the way this man thought about his craft, though I feel like I’ve only barely captured a glimpse of him. See My Architect to learn about Kahn, or to support its legendary distributor New Yorker Films (in business since the heroic 1962 release of Bertolucci’s otherwise unavailable Before the Revolution)—forget his son. Even better, wait for video, keep your finger close to the mute button, and experience all that could have been.