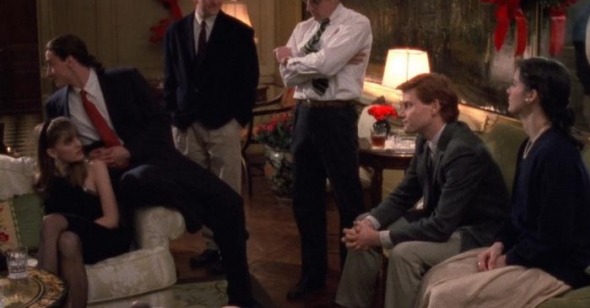 вАЬHas it ever occurred to you that today looked at from Jane Austen's perspective would look even worse?вАЭ responds MetropolitanвАЩs heroine Audrey Rouget (Carolyn Farina), in an unusually perceptive bit of undergrad analysis to counter her tentative love interest. ItвАЩs a not-bad definition of the perspective from which Stillman wrote this, his exemplary first movie, the two films that followed it and, presumably, his fabled work-in-progress, set to combine two unfinished Austen novels. While never feeling antique, thereвАЩs a solid moral grounding to his filmography that seems otherwise to belong to the 19th-century novel. As funny and brisk as his slim oeuvre is, itвАЩs easy to overlook the distinctвАФif non-oppressiveвАФChristian ethical compass that centers it. But make no mistake, Metropolitan not accidentally has a cross formed from an office buildingвАЩs lights as one of its earliest images, and has its spiritual center in a Mass at St. Thomas Church.

This might seem off-putting to some but, for this critic, grown into a sentimental Protestantism if not one of faith, the palpable decency of StillmanвАЩs films, as much as his well-turned dialogues, is essential to my affection. After watching one of his movies I find myself wanting to be betterвАФtiptoeing gingerly around tender feelings that I might otherwise stomp on, holding back on my drinking, and trying to be just a little more articulate. I even read Dale CarnegieвАЩs How to Win Friends and Influence People (well, most of it) solely on the recommendation of BarcelonaвАФI should note that these personal revolutions remained underway for roughly the lifespan of a common cold, but this should more be attributed to the meagerness of my moral fiber than any artistic falsity.

MetropolitanвАЩs action takes place in the course of one winter holiday in Manhattan, in the ranks of the self-appointed вАЬSally Fowler Rat Pack,вАЭ the blue-blooded college Freshmen descendants of Park Avenue aristocracy thrown together in the spate of debutante season balls. The usual social machinations of a cloistered group environment are observed in the fishbowl of afterparties in poshly appointed salonsвАФaffections grow, rivalries are staked out, feelings are mangledвАФand the old вАЬDo unto othersвА¶вАЭ of Luke 6:31, the various ways in which itвАЩs bungled, unconsciously and unconscionably, in human interaction, become a constant concern. AudreyвАЩs taken with Tom, the downwardly mobile outsider with facile Socialist leanings, while he, absorbed in the plot of his own adolescent melodrama, remains oblivious to the point of cruelty.

Though the ensemble, on the whole, seem a scotch older than the characters theyвАЩre playing, thereвАЩs a fidelity in their Awkward Age emotional peculiarities that makes them absolutely convincing. вАЬIt might sound melodramatic to say that heвАЩs вАШruined girlsвАЩвА¶ What does that really mean today?вАЭ says pedant Charlie Black (Taylor Nichols), fretting that ponytailed nouveau riche cad Rick Von Sloneker (a pampered slob you could imagine doing an on-camera confessional for HBOвАЩs Born Rich) may be mustering an assault on AudreyвАЩs maidenhead in Southampton. Of course for Charlie, and for a newly awakened Tom, that ruination means a great dealвАФthe particular concern with chastity in the English marriage novel of the 1800s matches up perfectly to the singular Puritanism of inexperienced, insecure young Romantic men in love.

IвАЩve never been at a loss for reasons to gush a few paragraphs about Eigeman, whoвАЩs got probably the best comic delivery going, even if it hasnвАЩt gotten much display of late outside of Gilmore Girls and DVD commentaries. But the discovery on this go-around with Metropolitan was Carolyn Farina as the smart, slim-necked Ms. Rouget. Hers is a tenderly wrought performance of quiet presence, sensitive to the frailties of a cloistered debutanteвАЩs heightened self-consciousness on suddenly finding herself an object of so much attention (EigemanвАЩs Nick Smith: вАЬThese girls are at a very vulnerable point in their lives; all of this is much more emotional and difficult for them than it is for us. TheyвАЩre on displayвАЭвАФand, indeed so many of her scenes are spent hunting stray eyelashes in the ladies room mirror, pouting over the frumpy shape of her gown, polishing her nails, or getting her legs waxed at the beautician). Seeing her admire her smooth calves with the cautious indulgence of newly-awakened pride is a just-perfect, totally contained actorвАЩs moment, enough to frustrate you in contemplating the career Farina hasnвАЩt hadвАФthough sheвАЩs at least allowed the distinction of never having been in a bad movie (Metropolitan, Little Noises, Age of Innocence, and Last Days of Disco, for the record).

CriterionвАЩs DVD supplies a pristine package to a pristine film. Gone is the inappropriate cover of the old VHS edition, a golden-hued still of a strip poker game that seemed to promise a haute bourgeoisie sex farce (as a horny young teen, I was pissed after renting this tape from the Cincinnati Public Library), now replaced by a lovely crosshatched sketch, like something from a Thirties party invitation, by French artist Pierre Le Tan, who StillmanвАЩs family business, an agency for cartoonists and illustrators, once represented. ItвАЩs of-a-piece with the filmвАЩs non-period specific feeling of radiant nostalgia, which Stillman describes designing in an excellent commentary shared with Eigeman, Nichols, and editor Christopher Tellefsen. Stillman discusses filling his film about a fading milieu, itself an odd matching of Hollywood Golden Age elegance to the budgetless indie ethos, with as many endangered-seeming Old Manhattan monuments as possibleвАФ21 Club, the old ScribnerвАЩs storefront, an extinct cafeteria on 44th StreetвАФto enhance its chairs-on-the-tables, вАШGoing Out of BusinessвАЩ atmosphere. ItвАЩs enough to make this film, only 15 years old, seem like something from a distant, more-beautiful pastвАФa quality shared by many works that just seem too impossibly good to have been made by the sort of humans who swarm around us in our day-to-day.