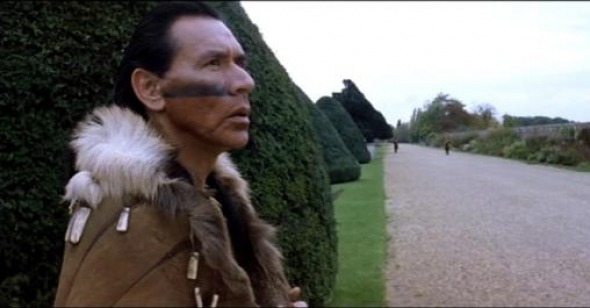 And the Ship Sails On
Jeff Reichert on The New World

What to say in the face of Terrence Malick‚Äôs The New World? What to say indeed in the face of a film that has left me at turns wobbly-kneed and energetic, teary-eyed and grinning, melancholy, and ecstatic? What to say about a film, that, more than any other in recent memory, seems intent on reinstating the visual in cinema to its proper place of primacy over sound and narrative, such that the only immediately comparable work may perhaps come from literally another world: F.W. Murnau‚Äôs 1927 Sunrise? What to say of a work that, for all its rapture with the sheer possibilities of the image, wholly retools the typical workings of cinema‚Äôs less-heralded half, such that the act of listening is elevated to a level of immersive engagement that has perhaps been lacking in theaters, again, since Sunrise? No, I don‚Äôt really want to talk about The New World, and I have found great difficulty in doing so, at least beyond brief platitudes. (‚ÄúIndescribably great‚ÄĚ has been my most ready shorthand this week, though the other night I mumbled to my wife: ‚ÄúIt‚Äôs, like, really important.‚ÄĚ) What good is talking about The New World when I want to wrap myself up in its emotional landscapes and lithesome melodies and surrender fully to its inexorable drift not unlike one of those lost souls in Shunji Iwai‚Äôs All About Lily Chou-Chou? If that‚Äôs an odd declaration from an ostensible critic, then so be it. Upon exiting my second viewing on a cloudy matinee Sunday, I found that Malick‚Äôs vision had rendered our world drab and cheap‚ÄĒas if, assuming we assign The New World a certain legitimacy as history, Captain Christopher Newport‚Äôs (Christopher Plummer) warnings to his fellow settlers in the film had fallen on deaf ears, allowing America to grow up stunted, deformed, tainted, and gross. In short, into the world we inhabit today.

But this‚ÄĒall of this is bullshit. Flaccid Rick Moody-esque rhetorical garbage that won‚Äôt bring anyone any closer to figuring out how tremendously important this movie is, and, more crucially, help others to recognize its worth. As much as I may believe all of these things‚ÄĒthat this kind of speechlessness in the face of art is a near instant augur of greatness, that a film whose ideas ebb and flow so grandly and subtly fares poorly when bound by the fixity of the written word, that if Malick chooses to engage his spectators on the level of the visual, then well, fuck, shouldn‚Äôt I be making him a collage or a photo diary?‚ÄĒbelieving them to myself isn‚Äôt going to sell tickets. And if we can‚Äôt help sell tickets for movies that we love, then what is the point of all this writing? Such has, and continues to be, the lot of the work of art criticism in the age of commerce, which only means that those who take it upon themselves to write need to shout louder as urgency increases. The New World represents an especially pressing case where surmounting the difficulty of translating an overwhelmingly personal experience of art into words becomes essential. If there was a film released in 2005 more in danger of misreading and more worthy of vehement, articulate polemic in its defense, I didn‚Äôt see it. And just because a buffoon like Richard Roeper called it right (where a more allegedly credible J. Hoberman didn‚Äôt), doesn‚Äôt diminish its greatness one iota.

So what then to say in the face of Terrence Malick‚Äôs The New World? Perhaps that we should stop referring to it as a film first, and call it for what it is: an essential work of American Art. The New World performs for American film something like what Henry James, Walt Whitman, John Coltrane, or Jackson Pollock each did in their respective idioms‚ÄĒradicalize form with the intent of distilling down to the purest of elements. Not to slight any of those aforementioned, but Malick‚Äôs realization of The New World may have been the most difficult, making his success in some ways more of a landmark. As is oft-noted, cinema remains the art form most closely tied to industry, so the mere act of assembling $50 million in financing for a piece of this nature certainly represents no easy task‚ÄĒit‚Äôs an art in itself. Of course, one could argue that Colin Farrell and Christian Bale don‚Äôt hurt salability, but if you‚Äôre Malick, how do you go about explaining a vision of primeval vistas wherein civilizations enter into contact, negotiate relationships, and settle on grounds uncommon and familiar to those that crunch the numbers or create categories for marketing plans? Framing the massive movements of peoples through the synecdoche of a love triangle is a start, for argument‚Äôs sake, but even given that, how does one then go on to justify (on paper) his decision to cast as his romantic lead an unknown 14-year old girl awkwardly named in life Q‚Äôorianka Kilcher, who‚Äôs left unnamed in the film for the bulk of its duration? (That she delivers perhaps the finest performance of the year is another story entirely.) There‚Äôs something inexplicable and confounding in the fact that a work like The New World exists and is in theaters nationwide, where a similar kind of sweeping, long-gestating project like Robert Bresson‚Äôs Genesis will never be seen. As another Reverse Shot writer commented to me after screening it: ‚ÄúFive years from now, we won‚Äôt be able to understand how The New World actually played in theaters.‚ÄĚ He may be right.

But exist (and in theaters no less) it does, and in grand fashion. The New World reeks of career summation, neatly collapsing so many of the various strands of Malick‚Äôs filmmaking into a single work: Man and nature, man in nature, ‚Äúnatural‚ÄĚ man vs. civilized man, the role of the outcast as actor in and outside of history. Locating these investigations within the birth narrative of our own nation and looking clearly at promising intersections between peoples eventually rent asunder by fear, habit, ambition, and ignorance almost can‚Äôt help but result in an urgent warning for our thoroughly embattled times. Labeling the film apolitical is a laugh, especially if attention has been paid to Captain Smith‚Äôs narration on the potentialities of the New World for Europeans, and watched how power and love pervert his ideals eventually forcing his flight. Malick‚Äôs no doe-eyed idealist (his previous features weren‚Äôt exactly utopian, even though they may have flirted in that direction) though his characters stretch these boundaries on occasion. For those uninterested in the lost art of criticism, Ferrell and Kilcher frolicking in the woods and wistfully musing will be easy to sneer at‚ÄĒany signs of the lovey-dovey in cinema are often easy shrug-offs for the more ‚Äúintellectual‚ÄĚ critic. But it‚Äôs by building his freeform wash of images and sounds and politico-philosophical investigations onto this, perhaps the most legible and fundamental of narrative structures, that represents Malick‚Äôs masterstroke. He‚Äôs simultaneously brought high and low crashing into each other to create the best of pop. Pop in a doublet and breeches or skins and war paint, but this is it nonetheless. The New World is no less intelligent for its yearning romanticism, and no less intellectual for his beating, heavy heart. And for those who accuse the work of aspiring towards some kind of transcendence, I‚Äôd counter that this sense is only the physical result (like in Bresson) of Malick‚Äôs utter control over the materiality‚ÄĒthe stuff‚ÄĒof cinema.

Of course given that The New World deals with characters who once existed, the question of verisimilitude arises, but it‚Äôs quickly swept to the side. Is Thomas Pynchon‚Äôs Mason & Dixon a less valid examination of its period because it features a talking dog and robotic duck? Those who would claim that Malick has twisted the record, fabricated, invented need remember that we are talking about the work of an artist with an agenda far beyond mere reportage‚ÄĒif he manipulates legend it‚Äôs only to make grander points. Period trappings or no, this is not a historical film. Those who would make the claim that Malick has looked backwards with an uncritical eye need look no further than a simple juxtaposition late in the film that finds Opechancanough (Wes Studi), observing with wonder the ability of man to sculpt nature as evinced by a topiary garden in England. This is dialectics, and presented in a way that confounds bigger categories like ‚Äúthe political‚ÄĚ with ‚Äúthe personal‚ÄĚ‚ÄĒthis shot carries an idea that viewers won‚Äôt need a post-graduate degree to understand, rendering it more valuable than a host of filmmakers‚Äô entire oeuvres. Placed within this context, again, of our nation‚Äôs birth narrative, Malick‚Äôs created an ineluctable combination of idea and image, just one of many in the course of the work. Textbook history does not make for a great art, and great liberties need not necessarily translate into great falsehoods. How much of what we see in The New World really happened? The correct answer is probably: All the broad strokes, Malick just filled in the details. But I don‚Äôt know, nor do I care. The New World is true enough for me.

Of course, those who follow our indieWIRE column know that, not unlike Malick, who seems to have settled on a Cerberian strategy for presenting his film to audiences, we‚Äôve rewritten our own history by placing The New World at the top of a list where once Kings and Queen rested. No slight to Desplechin, but I think even he‚Äôd agree that where his work may be epic, The New World is epochal. Weeks after we‚Äôd closed the voting, glowing reports started coming in from our writers, forcing another vote which led us to a simple conclusion: In 2005 Terrence Malick took off and left cinema behind. Or perhaps more accurately: he left the cinema of the time‚ÄĒall perverted and gnarled by narrative convention as it was‚ÄĒand headed for uncharted territory. No longer tied to a beaten down, tawdry medium of images chained to unworthy narratives, Malick‚Äôs work destroys false complacency engendered by overemphasis on continuity and reality. By displacing us to another world (though still our own) for a few hours, his new rules allow us to see and feel more clearly. I‚Äôd wager that the lessons of The New World will be more readily absorbed, in more organic ways, than all the shouted cries of other tragic, expiring historical figures of cinema‚Äôs past. ‚ÄúLearn from us!‚ÄĚ those films cry ‚ÄúBecause we show you how it happened.‚ÄĚ The subtler, chimerical Malick sighs, ‚ÄúListen to me, and perhaps you may find the way.‚ÄĚ It just might be the sweetest sound of the year.