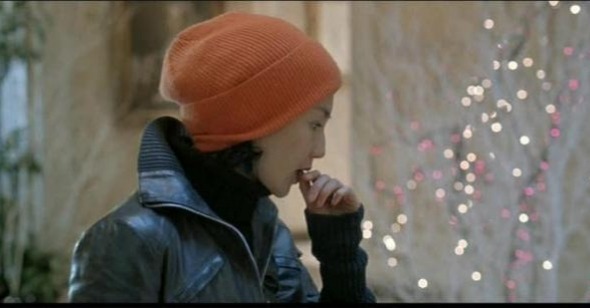 There was a time when I was sure that Clean would be some kind of petite hit. I first saw it play at Lincoln Center a couple of years ago with a friend who is as little a film snob as I am definitively one; when we walked out, she and I were both uncharacteristically afraid to start talking, and for the same reason‚Äîwe knew that if we opened our mouths our voices would crack and, just like that, we would wind up bawling.

Now the ability to incite a detectable physical reaction in a viewer is by no means the mark of cinematic greatness‚Äîif this were the case, Dead Poets Society and Dream Teens 5 would be undisputedly among the greatest accomplishments of the medium‚Äîbut to produce bracing emotion without having stacked the deck with screenwriter‚Äôs tricks, without the aid of sentimental molestation, as Clean does, is an accomplishment that shouldn‚Äôt be undervalued.

Having acquired Assayas‚Äôs latest film not long after its star, Maggie Cheung, very justifiably won Best Actress at Cannes 2004 for her performance in it, Palm Pictures promptly did absolutely nothing with Clean for nearly two years (despite a teasing smatter of press screenings early last year, followed by an announced-then-withdrawn ‚Äò05 release date), then granted a ceremonial theatrical residence to a few prints of the film a month or so back. For fanfare, Clean was allotted an advertising budget roughly equaling that of the kung-fu fleapit in Queens that advertises in the Voice (‚ÄúNew Policy: Two New Action Films at All Times‚Äù). The critical consensus was reservedly positive, though well shy of praise.

All of which should be just cause for the melancholy contemplation of our fetid mess of a film culture (Just how bad are things? Right now, someone is sighing: ‚ÄúSo, do you want to see Brick or The Proposition?‚Äù). Clean is largely English-language, luxuriantly emotional, pairs one of world cinema‚Äôs most remarkable leading ladies with the late-career Renaissance star of 48 Hrs., and is chock-a-block with hip, rock rag-sanctioned references. If a flick like this can‚Äôt do brisk business in American art houses, what can?

Clean begins amidst vistas of Hamilton, Ontario‚Äôs ashen smokestacks. Lee Hauser (James Johnston, formerly of the band Gallon Drunk‚Äîeveryone who plays a musician in Clean is, in fact, a musician) arrives in the burnt-out town for a gig‚Äîhe‚Äôs a 42-year old rocker of dissipated reputation, thanks to the two monkeys on his back: his heroin habit and his scag-hag wife, Emily Wang (Cheung), who reinforces it. They hit up a show to watch the Toronto band Metric play their appropriately nihilistic road anthem, ‚ÄúDead Disco‚Äù‚Äîlater backstage banter reveals that Lee and Emily have a kid together, abandoned to be raised by his parents. You might have a tough time getting by frontwoman Emily Haines‚Äôs line-readings, but the detail work on this outer-margins-of-rock-significance stuff feels on target, down to the beers in the bathroom sink, and you can settle into the movie knowing you‚Äôre in good hands. The abrasive Mrs. Wang tangles first with Lee‚Äôs manager (played by Canuck director Don McKellar, in chunky-rimmed geek chic glasses), then Lee‚Äîover her ‚Äúpsychedelic junky fantasy world‚Äù perception of her husband‚Äôs major label marketability, then over the music presses‚Äô casting of her as a succubus (from what we see, the rep doesn‚Äôt seem unjustified). She storms out of their motel and spends the night in their sedan, overlooking a shoreline walled with diabolical industry‚Äîthe slow slackening of Emily‚Äôs close-up, saturated-red lips amidst the dusky widescreen as she shoots up is one of the most lush images in recent filmmaking. When she gets back the next morning, Lee has OD‚Äôd, she‚Äôs busted for possession‚Äîand the party‚Äôs over.

Assayas, always a director unusually attentive to locking together song and image, whose proposed next project is a concert movie with demonlover collaborators Sonic Youth, has made his first real rock ‚Äòn‚Äô roll film here‚Äîand an excessively astute one, at that. Though Clean has been in mothballs for a couple of years, you could be forgiven, considering the vintage of its musical guest stars, for thinking it had been shot in 1999: Tricky? Mazzy Star‚Äôs David Roback (even a character in the film has to think a bit before saying ‚ÄúI remember Mazzy Star‚Äù)? I think Assayas, a with-it guy, is aware that these points of reference are several paces behind the perpetual onward surge of Next Big Things‚Äîand this is part-and-parcel with what he‚Äôs addressing here, in his oblique way: the rapacity with which the recording industry swallows up creative kids and squats them out. Lee‚Äôs father, Albrecht (Nick Nolte, whose reticent line readings are a gentle rumble), ruminates over the final stage in the process, as represented in the liner notes for reissues of his son‚Äôs discography: ‚ÄúThese journalists have this romantic idea of self-destruction‚Ä¶‚Äù

A lot of critics belittled what they perceived as soap-opera traditionalism in Clean‚Äôs narrative, particularly when placing it in comparison to the glassy Capitalist nightmare of demonlover‚Äîin fact a far less complex film. What almost nobody seemed to notice was how similar these two jet-set films were, both being concerned with the marketing and production mechanisms of internationally distributed entertainments‚Äîporn in demonlover, pop in Clean. Beyond its function as a kick-the-habit melodrama‚Äîthough it is that at base, and a restrained, remarkably modulated example of its type‚ÄîClean enacts a marketplace tragedy, a kind-of rock music New Grub Street for the era of global capitalism. Transaction is the movie‚Äôs hidden-on-the-surface plot: Canadian dollars, Euros, pounds, the camera documents the movement of them all with the assiduous attention of Bresson‚Äôs L‚ÄôArgent. The film‚Äôs laced with the dollars-and-cents stuff that most movies elide: selling Lee‚Äôs album postmortem (‚Äú[he‚Äôs] worth a lot more dead than alive,‚Äù notes McKellar), settling his debts through property sales, Emily‚Äôs hustling for work. To treat the film‚Äôs trendy milieu as chic-for-the-sake-of-chic, or its hemisphere-hopping as a bid for co-production bucks, is not only cynical, but a bad-faith underestimation of Assayas, a theory-smart director who, even at his most free-wheeling, is hyper-attentive to what he‚Äôs doing and why he‚Äôs doing it.

One primary difference between Clean and demonlover is that this film forces Assayas to tangle with pop music, something that he evidently loves, as both a market force and an art medium; I don‚Äôt think he had anything like the same ambivalence towards the manga and CGI smut in demonlover, and the result was a deathtrip movie that lacked friction in its hollows. Music is not just avaricious industry here, but the movie‚Äôs heartbeat, the instrument of and the soundtrack to Emily‚Äôs destruction and to her recovery. Once our heroine‚Äôs sprung from her six-month prison stint (flitted past by the film), she shops around some demos she recorded in the stir with another convict: one character‚Äôs analysis of Emily‚Äôs Nico impression‚Äî‚ÄúNot good, not bad. Like a lot of other stuff‚Äù‚Äîisn‚Äôt inaccurate, but that‚Äôs not the point. Emily needs something to help her form a new sense of identity that‚Äôs still distinct from the terror of normality; probably Clean‚Äôs most deadpan comic moment comes as she interviews with a minor department store exec with a bad comb-over, and he recalls the music video program that Emily had hosted years ago: ‚ÄúIt was my generation,‚Äù he remembers, and the elevator doors shutting on them may as well be a coffin being sealed. It‚Äôs the way music, or taste, enters into a lot of our lives‚Äîmaking us feel privy to something special, and therefore feeling special ourselves‚Äîand it‚Äôs to the movie‚Äôs credit that it neither condescends to Emily‚Äôs mediocrity or oversells her as a genius. As per genius: Clean is refrained by a trio of Brian Eno songs‚Äî‚ÄúAn Ending (Ascent),‚Äù ‚ÄúSpider & I,‚Äù and ‚ÄúTaking Tiger Mountain‚Äù; the way their synths pour over the soundtrack feels like warm water rushing through a sluice; they give the movie a float that moves from methadone space-out to a blurry-eyed optimism.

Emily‚Äôs rehab is no exercise in dry theory‚Äîit‚Äôs the excruciatingly detailed, day-by-day document of an obliterated woman trying to re-articulate herself as a person from out of the haze of addiction. The trajectory of her journey recalls a line from John Waters‚Äôs Cecil B. Demented: ‚ÄúBefore I started doing drugs, I had so many problems. Now I only have one. Drugs. I have a focus now.‚Äù The tweaked-out stress of scoring is replaced by more slippery complications: Emily has to try to define herself in a role she‚Äôs never played, motherhood, and find a way to prepare herself for release and adaptation into an economy where, in the natural order, she was expected to die before she got old. The emotional carrot-on-a-stick in her rehab is prompted by her strained relationship with Albrecht: he has custody of her kid, and doesn‚Äôt intend to give him back until his daughter-in-law gets her proverbial shit in one sock. Nolte‚Äîwho filled in with short notice as Albrecht, replacing a fatally ill Alan Bates‚Äîgives a tentative, intelligent performance: he‚Äôs mindful of everything, especially the timbre of his creaking voice, and he navigates his way through his handful of scenes involving the handling of his son‚Äôs estate without ever slouching into befuddled ‚Äúkids today‚Äù fogeyism; even when he has to bring up ‚Äúthis fellow Tricky,‚Äù he plays straight past the opportunity to step out and wink from his characterization.

Emily moves back to Paris, where she‚Äôd lived years ago; she tries to find and hold a job, re-connects with old girlfriends (also ex-lovers, B√©atrice Dalle and Jeanne Balibar are typical Assayas women‚Äîindependent, stylish, beautiful, and most often trendily bisexual), and with old girlfriend‚Äôs girlfriends, as in a awkwardly integrated subplot involving Balibar‚Äôs chick, Laetitia Spigarelli, probably the film‚Äôs most untenable supporting part. Clean has no affinity for big scenes‚Äîit plays as a collection of odds and ends‚Äîso we‚Äôre spared the sight of Cheung gnashing and thrashing on the carpet through withdrawal, we don‚Äôt see her squaring her shoulders and swearing resolutions‚ÄîDP Eric Gautier‚Äôs incidental-seeming camerawork records Emily tearing up her methadone prescription without much more bathos than it follows her swiping her bus pass. When Emily admits to her son what she‚Äôs denied to everyone else in the movie‚Äîthat she bought the junk that killed her husband‚Äîit‚Äôs so casual you might not even catch it. At any rate, she‚Äôll soon enough be scrounging for pharmaceuticals in purses and medicine cabinets, slipping back into her bullshitting‚Äî‚Äúchange,‚Äù a word that keeps cropping up in this film, doesn‚Äôt just happen; it‚Äôs a perpetual scrabble of backslides and quotidian humiliations, which Clean lends visceral gravitas. When, in one precisely edited scene, spaced-out Emily face plants during a waitressing shift, you might jolt as though she‚Äôd just been stabbed.

The payoff for her work isn‚Äôt any real kind of resolution, just another vista, to bookend the movie with the poisoned, slate skies above Hamilton. Emily, having managed to wrangle a recording session, steps out to catch a smoke, and she‚Äôs suddenly looking across San Francisco Bay‚Äîit‚Äôs an expansive moment in a movie that‚Äôs retained such a close clench on its subject: a clogged perspective is replaced by a clean one. And if it‚Äôs not quite redemption, it‚Äôs as close as anyone could reasonably hope for.