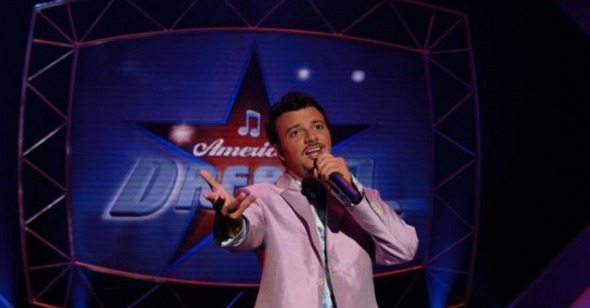 State of the Union
by Nick Pinkerton

The last time, you may recall, that Paul Weitz made a film (co-directed with his then collaborator, brother Chris) whose title was prefixed with ‚ÄúAmerican‚ÄĚ‚ÄĒAmerican Pie‚ÄĒthe patriotic staple in question got famously fucked. So it‚Äôs a fair question: Does his newest offering similarly stick it to that still-potent idea of the American Dream?

Well, not as such, no‚ÄĒdid you really expect otherwise? But let it not be said that American Dreamz is a movie that lacks for scope; it stakes out a playing field of impressive dimensions early on, with a dramatis personae who clutch together a disparate batch of national preoccupations‚ÄĒpop, politics, and terrorism. There‚Äôs Martin Tweed, host of ‚ÄúAmerican Dreamz,‚ÄĚ a vastly popular American Idol‚Äďtype program (Hugh Grant, inevitably suggesting Simon Cowell in his English-ness, though Grant‚Äôs less puffy and more feasibly heterosexual), first met in his frigidly expensive L.A. house pulling off a cool, execution-style break-up (‚ÄúYou make me feel like being a better person, and I‚Äôm not a better person‚ÄĚ); a pinched, slow-on-the-uptake President Joseph Staton (Dennis Quaid, suggesting guess who?), introduced on the dazed morning after of his re-election; Omer (Sam Golzari), a klutzy young Afghan temperamentally unsuited but duty-bound to play terrorist, whose general ineptitude and secret love of show tunes from the Great White Way get him sent to a U.S. ‚Äúsleeper cell‚ÄĚ among clueless relatives (including the staggeringly pretty young Noureen DeWulf)‚Ä¶ just so he won‚Äôt be underfoot; and a county princess (Mandy Moore) from Padokoo, Ohio, whose cocoa butter‚Äďsheened cuteness conceals a calculated drive for fame to make Julien Sorel blanch.

All the elements are in order for an Orange Alert State of the Union comedy‚ÄĒa 21st-century Dr. Strangelove, perhaps‚ÄĒbut the Dreamz ensemble has a significantly less urgent, edge-of-Armageddon agenda. The main idea here is the supremacy of entertainment values in every arena of contemporary life; as Pres. Staton, approval ratings plummeting, is pushed into a guest judge slot on ‚ÄúAmerican Dreamz,‚ÄĚ Tweed correctly asserts over the bargaining table that the White House needs his show (and its robust Nielsens‚ÄĒthis world is ruled by approval ratings of one kind or another), not vice-versa. That set of attitudes usually denoted as specifically ‚ÄúHollywood‚ÄĚ aren‚Äôt comfortably confined by L.A. county lines here‚ÄĒrural Ohio has its hustling hussies, and even the director of a terrorist training video in the Pakistan-Afghanistan border hinterlands is a film school hotshot, barking ‚ÄúLet‚Äôs shoot this puppy‚ÄĚ to move his shoot along. And in this entertainment culture, the world‚ÄĒand the film‚Äôs cast‚ÄĒare divided into two types: sincere, big-eyed boobs and, as one character puts it, ‚Äúbehind-the-scenes players‚Ä¶ puppet masters‚Ä¶ svengalis.‚ÄĚ

Into the former category falls Quaid‚Äôs President Staton (a friendly, sobered-up frat-house rowdy; he‚Äôs the President that American Pie‚Äôs Stifler might make 30 years down the line, with the right connections‚ÄĒor maybe Chris Klein in Election), into the latter, V.P. Sutter (Willem Dafoe, who gets his biggest laugh in his first appearance, bald-pated death‚Äôs head popping skinny and turtle-like out of an overpadded torso), a Cheney/ Rove amalgamation who feeds the Commander-in-Chief simplified metaphors of international politics culled from Marvel comics (Iran and North Korea = Dr. Octopus and Magneto), a steady diet of ‚Äúhappy pills‚ÄĚ to keep his mind off the newspapers, and even his lines, via an earpiece, a shade of the first ‚Äô04 presidential debate. Midwestern Machiavellian Sally, a ‚ÄúDreamz‚ÄĚ contestant, keeps her earnest dweeb boyfriend (Chris Klein, naturally) strung along for the heartwarming backstory he lends to her bid on the hearts and minds of The Crowd‚ÄĒhe‚Äôs a wounded veteran‚ÄĒeven though, she confesses, ‚Äúevery time he smiles I want to hit him in the teeth with my shoe.‚ÄĚ And feckless Omer, who sweeps into ‚ÄúAmerican Dreamz‚ÄĚ‚Äôs final rounds in the token Arab role, is beset by his own, very persuasive management team, a trio of terrorists who want him to detonate himself and the President onstage on the program‚Äôs season finale.

The film is imminently watchable, especially when Grant is at the center of a scene. As an actor of more-than-usual literacy (I‚Äôm not basing this on accent alone‚ÄĒhe studied at New College, Oxford, and on Inside the Actor‚Äôs Studio he could still quote verse from memory), he must be a little acquainted with the acid taste of self-hate that charges up when cashing his Mickey Blue Eyes paycheck, earned by a few weeks of phoning-in flummoxation, or doing the talk show rounds as public chastisement for parking lot transgressions. So he lets himself get wonderfully pickled in his own rottenness here‚ÄĒhis relaxed Californian couture (open-necked button-ups untucked over $200 jeans, and always some insipid surfer neckware) and nice, even tan want to imply youth, health, happiness, but his chipper, ingratiating little smiles have a reproachful wince built into them, and they turn his face into a roadmap of lines. His scythe-like Cowell-isms are wonderful; to an oversinging contestant caressing out the line ‚ÄúI‚Äôve never felt this way before‚ÄĚ: ‚ÄúI‚Äôm afraid I have felt this way before, and it was just before I tried to kill myself.‚ÄĚ Weitz, who directed Grant before in the fine, wistful About a Boy, seems to be the only man working who can still find elbow room inside the actor‚Äôs hyperarticulated schtick, and the simpatico of how they work together suffices to make Dreamz a justifiable expenditure of celluloid.

Nothing else in this movie quite burns through like Grant‚Äôs chopped-out little grins. In fact, as satires go, it‚Äôs a shockingly affable one. The terrorists are stock goons, Afghani by way of Hal Roach studios‚ÄĒI‚Äôd wondered how long it‚Äôd be until we have Jihad-ing Mohammedans in our movies as unthreatening as Boris Badenov or the bustling turnip-shaped Muscovites in One, Two, Three. And these enemies of liberty are hooked on American TV, too!‚ÄĒwhich strikes me as a rather bogus conceit; isn‚Äôt one of the things that frightens us most about the Moslem World the idea of a culture with the mettle to either resist or remain ignorant of our pop exports? It‚Äôs more or less a consensus that it was only entertainment, in one form or another, that could topple the Berlin Wall‚ÄĒif not Reagan, then Michael Jackson.

On the other side of the cultural divide, we have Quaid‚Äôs gentle, almost cradling mock-up G.W. He‚Äôs got the eyes down‚ÄĒthat oblique squint that is to some resolve, to others calculation, to others eight long years of uncomprehending, puzzled scrutiny of an obscure something in the distance. Dreamz‚Äôs Staton is probably the kindest possible assessment that any liberal could have of Bush: a doofus with a palpable simpleton‚Äôs decency, nudged in all the wrong directions by an administration of war hawks, profiteers, etc. He also has our president‚Äôs prowess in a pinch, at crucial-seeming-but-actually-risk-free photo-op moments: shot low, backlit by studio lamps, he assumes a halo of leaderly salvation when the shoot of the ‚ÄúDreamz‚ÄĚ finale turns into crisis.

Preceding scenes of soul-searching between the Commander-in-Chief and his excruciatingly understanding First Lady (Marcia Gay Harden), who works to wean him from worm-tongued advisors into having faith in his own moral instincts, are the movie‚Äôs most flaccid‚ÄĒwhich brings up something tricky at the center of the film‚Äôs script (by Weitz). American Dreamz‚Äôs thesis would seem to be that the brightest hope for our embattled Republic is for the basically sane, honest, upright people who hold positions of power to mute out the movers, shakers, and manipulators at their ears‚Ä¶ but the movie's obviously more enamored with backstage skullduggery, and with the emotional amputees who pillage their way into the public eye, pulled by consuming instinct. It‚Äôs Sweet Smell of Success syndrome: we know that J.J. Hunsecker and Sidney Falco are nasty men, and yet we want to scream for them to come back whenever we‚Äôre locked into a scene for three minutes with Susan Harrison and Martin Milner‚Äôs hunky, cornfed jazz guitarist. That the jaundiced and jaded are almost always funnier than the kind and compassionate is one of those sad facts of life and satire‚ÄĒan imbalance that takes unusual artistry and wisdom to properly address.

To those who have the feeling of living in an America truly imperiled from within and without, a city on a hill whose perch is becoming ever more precarious, American Dreamz may seem a frustratingly amiable film. If you have ever had a inkling when watching television‚ÄĒas I sometimes do‚ÄĒthat you‚Äôre seeing images which will eventually resurface as archival evidence on some ‚ÄúDecline of the American Empire‚ÄĚ special a century down the line, the ‚ÄúThat‚Äôs Entertainment‚ÄĚ shrug of Dreamz may even seem risible.

I was merely a bit disappointed, though rarely bored, in seeing a movie with such breadth resolving to do so little. Another fact of satire is that its piquancy depends on a feeling of in-the-nowness, and Dreamz seems well behind the times in its assertion that entertainment and politics have cross-pollinated‚ÄĒremember that we have already seen a head of SAG as president. And the film‚Äôs crisp characterizations are even more quaintly reassuring; it‚Äôs a bit too easy to separate the boobs from the svengalis here. But on thinking back, this becomes a darker, stranger movie than you might remember having just seen. The cutesy, mischievous flute on the score, the goofy reaction shot that Klein has after catching an insurgent‚Äôs bullet‚ÄĒas the movie bounces along, weightless as fake tits, you might not even notice how full of death it is.