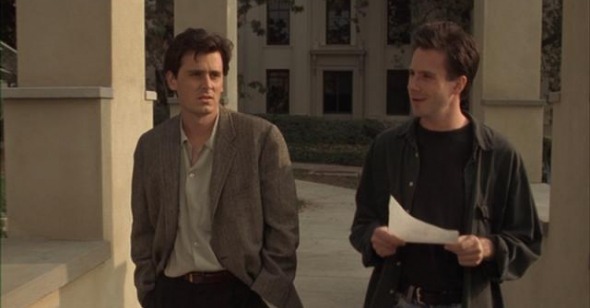 “Who would you rather be stranded on a desert island with, McNeil or Lehrer?” It’s one of the first lines we hear in Noah Baumbach’s Kicking and Screaming, a tossed-off quip overheard at a college graduation party that works like a (pre-wingnut) Dennis Miller joke: kinda funny, yes, but a considerable part of the pleasure comes from its flattery of our hipness. The greatness of Kicking and Screaming lies not just in its refusal to stay on that register but also in its graceful deconstruction of it. Beneath the witty logorrhea and disaffected veneer is a sustained undercurrent of melancholy. The jokes may be what keep you coming back to the movie, but it’s that delicacy of feeling that makes it hold up.

Lumped in with the abominable Gen-X manifestos and indie talkathons of the mid-Nineties, Baumbach’s debut never got its due, from neither seller nor public. Its marketing was a parody of studio cluelessness. The movie went largely unseen until after its release on video, its selection to the 1995 New York Film Festival notwithstanding. Transparently based on his experiences at Vassar, Baumbach’s movie, originally titled “5th Year,” follows the postgraduation exploits of a group of college friends. Grover (Josh Hamilton), Max (Chris Eigeman), Otis (Carlos Jacott), and Skippy (Jason Wiles) are paralyzed by the prospect of moving on. Instead, they spend the first months of the rest of their lives near college, sleeping with freshmen, postponing grad school, and doing crosswords. Precipitated by Grover’s breakup with Jane (Olivia d’Abo—where has she gone?), who leaves for Prague, the movie watches the guys stew in stasis, even as flashbacks of Grover’s romance with Jane punctuate the listless present.

The dead-on depiction of college life—with a few idealized touches here and there—seemed to preordain cult status. It’s all there: the drunken hook-ups, the lame freshman dorm partying (a little too close to home, that), the obsession with pop-culture arcana, the cringe-inducing creative writing workshop. (All that was missing was a capella.) Stealing from his own life, Baumbach tapped into a common generational experience. That dynamic—between a writer writing what he knows and an audience seeing itself on the screen—can lead to insufferable movies. But Baumbach avoids self-indulgent banality by steering clear of the pandering that torpedoes most generational statements. You get the sense that he’s only trying to realize what’s in his head, not what he thinks we’d like to see. His movie doesn’t pretend to dispense truths for its demographic, and it ends up being all the more truthful for it.

Now out on DVD from the Criterion Collection after years in limbo, Kicking and Screaming has lost none of its hilarity or grace. Indeed, for those who saw the movie while in college, nostalgia for the period only deepens the affection for Baumbach’s rendering of it. But what stands out now is the sophistication of Baumbach’s filmmaking. Yes, the bow-hunting bit and Cookie Man are still awesome, but each new viewing has brought a greater appreciation of just how beautifully proportioned and brilliantly executed Baumbach’s movie is.

Despite his skimpy oeuvre, Baumbach has already mapped out his thematic territory: the follies of the overeducated American male. In Kicking and Screaming, language isn't a vehicle for communication but an escape from it. The same goes for culture. Common experiences, like knowing the same movies or the same songs, become less a basis for meaningful relationships than a means for avoiding important things. Baumbach’s men are burdened by an overdeveloped sense of identity, a self-consciousness that always leaves them at a remove—a tendency the director takes to its absurd conclusion in Mr. Jealousy, a movie in which the hero picks a fight with his girlfriend for having sex with him a little too quickly into their relationship. In The Squid and the Whale, a son tells his mother, “I don’t see myself this way.” That sense of detachment, viewing life as something to sculpt rather than to live, afflicts his protagonists, too smart and knowing for their own good.

The obvious progenitors of Kicking and Screaming are Woody Allen and Whit Stillman, but Baumbach assimilates their influences and emerges with something he can call his own. If Annie Hall and Manhattan seem the template for Baumbach’s stab at bittersweet comedy, Kicking and Screaming evinces a worldview less provincial than Allen’s—or attempts to at any rate. That openness is best seen in Max’s unlikely relationship with Kate, a gum-snapping townie from a lower tax bracket. It’s a touch unconvincing perhaps, but it’s indicative of a generous sensibility that seeks to pierce through his protagonists' cliquishness. A couple of times, Baumbach has a woman tell the guys that they all “talk alike,” observations that pop their hermetic bubble, laying bare their insularity. That same critical outlook separates him from Stillman, perhaps a closer reference point. While interested in documenting the same socioeconomic stratum, Baumbach does away with the whiff of reaction in Stillman’s cinema. For all of the self-indulgent identification that Kicking and Screaming might inspire in its upper-class demographic, Baumbach’s movie is no defense of the discreet charm of the bourgeoisie. Its elegy is for a period in life, not a way of life.

In an essay for the new DVD’s liner notes, Jonathan Rosenbaum brings up Jean Renoir in his discussion of Baumbach’s visual style. The invocation may seem over-the-top, but it fits. With its overlapping dialogue, crowded frames and crackling spontaneity, Kicking and Screaming is after the lived-in atmosphere of Renoir’s cinema. People walk in and out of the proscenium without fanfare, hinting at a larger world beyond our sight. Sometimes, the camera takes on a more subjective mode. In its furtive peeks over shoulders and quiet prowls down halls and around rooms, it conveys the rovings of an obsessive memory. The pull of the past is made explicit in the movie’s key leitmotif: Grover, face never seen, going to the answering machine, listening to the same message from Jane again and again. The movie’s most despairing shot is Baumbach's most Wong Kar-wai-esque: a slow pan around the room, with Grover at his desk, back to the camera, wallowing in the sound of Jane’s static-drowned voice.

Kicking and Screaming’s sadness doesn’t emanate just from Grover’s pining but also from a larger sense of loss. Baumbach’s carefully shaped movie gradually eases us into a wistful mood, the one-liners and repartee dissipating as the first hour fades. When Grover decides to dive headlong into an adventure near the end—an impulse purchase of a ticket for Prague—he is ultimately foiled. “You can always go tomorrow,” says ticket agent. Grover nods, but we know, and he knows, that he won’t—that window has closed. Beautifully played by Josh Hamilton, the scene is an epitaph not just for a romance, but for the romantic possibility of youth.

“I wish I was retiring,” says Max at some point, a sentiment that seems to affirm Shaw’s observation that youth is wasted on the young. Yet Kicking and Screaming manages to convey that premature exhaustion without edging into triteness. Members of the most privileged generation in human history, the men-children of Kicking and Screaming are too weighed down by expectation and ambition. Spoiled all their lives, they confront the prospect of actually needing to prove their worth and quaver at the thought. When the sound of crashing glass is followed by a shot of Max putting a “BROKEN GLASS” sign on the floor, it’s not just a funny bit but a wry illustration of the paralysis and indolence—the two are indistinguishable here—that grip a generation that has never had to clean up after itself.

Part of the reason why I harp on the movie's emotional substance is that its maker seems in need of reminding. In an interview in New York magazine, Noah Baumbach said of his recent The Squid and the Whale, “In a general way, I think, I wanted to make more emotional movies that were less about being clever.” Kicking and Screaming does have a touch of the posturing Baumbach frets about, but he sells himself short if he sees it as little more than a collection of riffs. Refracted through the lens of experience, Kicking and Screaming may seem to Baumbach an embarrassing relic (parts anyway) of callow youth, like an old mix tape to an ex or a cheesy yearbook inscription. But Baumbach was actually much older then. More than ten years later, Kicking and Screaming remains a poised and insightful work, a debut with a remarkable sense of proportion and perspective. And yeah, it's pretty damn clever, too.