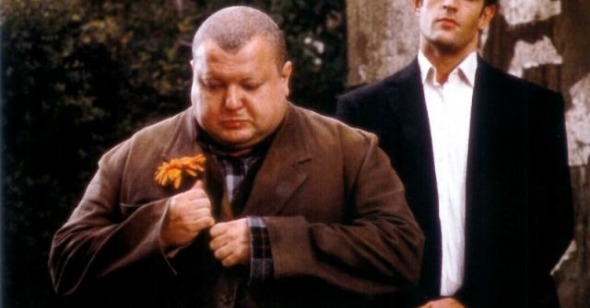 The layered flounce of Goth Rock came to the screen with a vengeance in the early Nineties, as kids who‚Äôd once looked up to posters of funeral-arrayed icons like Siouxsie Sioux, Bauhaus, and the Cure‚Äôs Robert Smith were coming of age and landing jobs in the film industry. Accumulation was the key of the Goth‚Äôs walking-Olde-Curio-Shoppe dress code‚Äîleather fol-de-rol, ruffled shirts, Edwardian bowlers, jangling memento-mori accessories‚Äîand so obsessive clutter became the key for the Neo-Gothic movie‚Äôs art department; they created spaces that ceased to refer to anything in the films themselves, resembling nothing more than curated collections. If there is a landmark movie for the cross-medium synthesis, in which cinematography began taking orders from decor, it may be wunderkind Tim Burton‚Äôs 1989 film of Batman‚Äîit‚Äôs worth noting that the epicenter of London‚Äôs nascent Goth scene was Soho‚Äôs Batcave‚Äîwith Joel Schumacher‚Äôs blowdried New Romantic The Lost Boys of 1987 an early harbinger of things to come.

The ragpicker‚Äôs shop aesthetic‚Äîbits of yellow bone, guttering candles, pickled fetuses, busted gadgetry, bottles with peeling labels, ragged parchment‚Äîwas omnipresent for some years thereafter: Burton‚Äôs Edward Scissorhands, Mark Romanek‚Äôs sepia-toned video for Nine Inch Nails‚Äô ‚ÄúCloser,‚Äù and, in perhaps its most thorough cinematic manifestation, Alex Proyas‚Äô 1993 S&M superhero flick The Crow (one of those movies that interprets perpetual downpour as "mood"‚Äîthe tie-in soundtrack featured NIN‚Äôs straight-ahead cover of proto-Goth Joy Division‚Äôs ‚ÄúDead Souls," alongside genre stalwarts like the Cure and My Life with the Thrill Kill Kult). Googleplex salability proven, the Goth movie's style has since been adapted to a bevy of interchangable action-horror blockbusters where raven-haired vixens do battle with the Forces of the Night for a share of the disposable income of former "Vampire: The Masquerade" acolytes now working in tech service.

A decade-plus after the fact, the early Goth-cinema works are easy to see for what they are: loads of arcana enshrining puerile broodiness (Scissorhands seems particularly risible, with Burton full-on consecrating the beautiful outsider baloney that he‚Äôd so-recently ribbed in Beetlejuice‚Äî‚ÄúMy whole life is a dark room. One‚Ä¶ big‚Ä¶ dark‚Ä¶room.‚Äù) and rickety spookhouse mannerisms gutted for a CGI renovation, ignoring the fact that so much money on-screen is very rarely scary, at least not for the reasons intended. Which brings us to the exception that proves the rule: Michele Soavi‚Äôs Goth-y, genuinely dark 1994 Franco-Italian co-production Cemetery Man. Though the film‚Äôs gruesome slapstick-romantic comedy-provincial satire-existentialist fantasy amalgamation proved a popular success in Italy, the movie tanked during a 1996 American theatrical run enabled by the late October Films, though still attracting some cult status. Its at-long-last arrival on anamorphic widescreen DVD will be cause for celebration for fans of Italian horror cinema, but‚Äîand I say this as one who emphatically does not consider creative mutilation a worthy artistic ends in itself‚Äîit deserves the notice of moviegoers in general.

The Cemetery Man in question is Francesco Dellamorte (Rupert Everett; the film‚Äôs Italian title was the far-more-evocative Dellamorte Dellamore: of love, of death), watchman of the Buffalore cemetery, whose duties go well past the usual nightly rounds; per his voice-over: ‚ÄúI don‚Äôt know how the epidemic started‚Ä¶ All I know is that some people, on the seventh night after their death, come back to life.‚Äù And they come back hungry, as usual, for the flesh of the living; in order to set these ‚ÄúReturners‚Äù to permanent rest, Dellamorte, aided by his mute, Brueghelesque plug-ugly of an assistant Gnagi (turnip-squat French comic star Francois Hadji-Lazaro, whose only utterance is an all-purpose ‚ÄúNyagh!‚Äù), opens up their skulls with whatever‚Äôs handy: pistol, spade, wrought-iron tombstone decoration. An incurious sort, Dellamorte is grudgingly resolved to his chartered routine of killing the dead, which he performs as punch-the-clock drudgery, squeezing off shots while he handles phone calls, like the counterman at the deli who keeps his cell glued to his ear while he‚Äôs ringing you up. ‚ÄúIs this the beginning of an invasion? Does it happen in all cemeteries? ‚Ä¶ Who knows? And in the end, who cares?‚Äù At least within the protective walls of his necropolis he‚Äôs free of the spiffy scooter-riding small-town I Vitelloni types who shower him with heckles about his alleged impotence (how this became public domain is left unclear) whenever he goes into town.

The instrument for disturbing Francesco‚Äôs torpor arrives in the form of a sexpot widow (buxom Anna Falchi, an open challenge to any dressmaker, identified as ‚ÄúShe‚Äù in the credits), who helps our hero prove those impotence rumors wrong, and atop the grave of her late husband, no less (we see the old man's porcelain portrait turn from codgerly amiability to a possessive scowl). Since it‚Äôs routine reviewer practice to praise straight actors for going gay-for-pay, I will note that Everett is convincing in his fixation on Falchi, a lust that is tragically short-lived‚Äîher husband returns to settle scores, and Francesco is left to grieve. As Dellamorte's despair settles into deadpan-broadcast nihilism (emerging into a bright day: ‚ÄúThe weather‚Äôs gone bad‚Äù), the film evolves into mind-of-a-madman stuff; our hero's nocturnal routine of re-killing the already-dead blurs into straightfoward homicide with the idea of a time-saving technique: why not shoot people in the head before they've died, so they‚Äôll only need to be buried once? Making matters all the more dizzying, Dellamorte's lost love keeps resurfacing (or at least women, played by Falchi, who look exactly like her‚Äîshades of The Life and Death of Colonel Blimp), only to trigger aftershocks of his heartbreak. The investigations into Francesco's murders by the local police, led by the very funny career-expatriate American actor Mickey Knox, mount in absurd ineptitude, finally‚Äîliterally‚Äîignoring Dellamorte's smoking gun as he‚Äôs walking away from a hospital massacre; Raul Ruiz‚Äôs flat Ce jour-la reached for similar elephant-in-the-room surrealism, but it‚Äôs torpid in contrast to the twisty momentum of Cemetery Man‚Äîas Francesco, in a long overhead shot, moves down the endless spiral of the hospital stairs, you can feel the movie draining toward a climax of nothingness.

Which is exactly where it does finish; Dellamorte and Gnagi pack up to leave town, but they hit a dead end: ‚ÄúI should‚Äôve known it. The rest of the world doesn‚Äôt exist.‚Äù The film's final moments screech in abruptly, involving a sudden transference of identities, and a gutsy metaphoric edit that leads from the duo dazed, at the edge of eternity, with a wet flurry starting to come down‚Äîto the image of their tiny figures, fixed at the same dilemma, reproduced inside a snow globe, the same trinket seen on Francesco's desk in the film's opening credits. But this isn't as much of a bolt from the blue as some contemporary reviewers might've had you believe, and certainly not a last-ditch effort to confuse viewers with a obfuscating smokescreen of pseudo-profundity. This admittedly dilettantish movie counts provincial asphyxia among its many tangential subjects, and it‚Äôs chock-full of images of containment, of which the snow globe is only the final, and thus, most damning: Francesco‚Äôs walled-in existence at Buffalore cemetery; the paperwork-choked office of Dellamorte‚Äôs only friend, a local beureaucrat; a hospital bed, hemmed in by screens, shot from overhead amidst a field of black (Paul Schrader has shown particular fondness for this effect in his Mishima and Patty Hearst). Dellamorte Dellamore finally snaps closed on itself with the tight-lipped finality of a sealed coffin‚Äîapt enough for a movie which suggests death and life aren‚Äôt all that dissimilar and, if anything, life, with its cyclical romantic catastrophes and repetitious workaday drudgery (Gnagi‚Äôs vainly clawing at windswept leaves with a broken toothed-rake; Francesco's Sisyphan re-killing and re-burying) is the more unpleasant of the options. Nasty stuff, but gallows funny: I doubt I‚Äôve gone a month since first seeing Cemetery Man without borrowing Dellamorte‚Äôs best one-liner for muttering under my breath: ‚ÄúI‚Äôd give my life to be dead.‚Äù

Dellamorte Dellamore‚Äôs source material is Italian cult author/ cartoonist Tiziano Sclavi's novel of the same title; as detailed in an accompanying featurette, ‚ÄúDeath is Beautiful,‚Äù it was a piece of casting serendipity to land Everett, whose long, loose gravestone jaw inspired the look of the Dellamore character in his Dylan Dog comics (popular enough to be newsstand-available). Without having seen any of Sclavi's work for comparison, I will say that the film seems cast with graphic impact as top priority‚Äîin general, the implicit freedoms created by shooting without synch sound in Italian cinema lends itself to casting according to faces, figures, silhouettes, and you get a contained universe of wonderfully distinct bodies here: moony Everett, long legs in black denim smeared with grave dirt, stoop-shouldered, abashed at his conspicuous tallness; Falchi, hyperbolically voluptuous, overinflated to bursting, her breathy line readings like air escaping; Hadji-Lazaro, a Charles Addams doodle played with the pathos of a blubbering silent-film grotesque. Just as well cast is the cemetery itself; the production used an actual terraced graveyard for its art director‚Äôs canvas, hemmed with jutting cypresses (never more closely resembling Milton's ‚Äúpillars of black flame‚Äù), generously embellished with fanciful plaster monuments that create touches of the ethereal amidst the loamy decay: the simple composition of a painted globe headpiece, framed in alignment with the reflection of the moon in fetid water, creates a miniature cosmos; will-o-the-wisps, visibly rigged-up on fishing wire, dart between headstones like comets; backlit fog forms low-lying clouds.

Though Cemetery Man is, on the whole, a very funny movie‚Äîand that‚Äôs all I usually ask‚ÄîI have watched it to the point where most of its gags have worn dull, and I‚Äôm still not tired of it; it‚Äôs not a Screamin‚Äô Lord Sutch/ Rob Zombie-type concoction with a lifeline only as long as its novelty‚Äôs novel (though I still find new things to laugh at here; Gnagi has a framed picture next to his bed of himself holding a trophy, standing next to Dellamorte... it only becomes a gag when you ask yourself what Gnagi could‚Äôve possibly won a trophy for). This rewatchability is accountable to many things: handcrafted poetry, sarcastic brooding, and talents (Everett, director Soavi) working at a level they‚Äôd never equaled before or since. Soavi is a former understudy of Dario Argento, his projects under his mentor‚Äôs auspices including The Church, a barely coherent rubber monster mash featuring an adolescent Asia Argento that essentially remakes Lamberto Bava‚Äôs Demons inside a cathedral (it does contain one moment of ecstatic madness: a possessed man wrenches out his own heart, lofts it over a Cecil DeMille fuchsia sky then‚Äîsnap, cut to the camera racing across Budapest‚Äôs Elizabeth bridge, scored by Phillip Glass), and Stage Fright, a stylish but irredeemable slasher (No Shame DVD has re-released some of his subsequent TV work, for interested parties). Nothing in Soavi‚Äôs resume would suggest a Cemetery Man is within his powers, but the document is undeniable; along with the largely forgotten and DVD-unavailable The Young Poisoner‚Äôs Handbook, this is what made the fallow Nineties worthwhile for connoisseurs of the art of darkness.