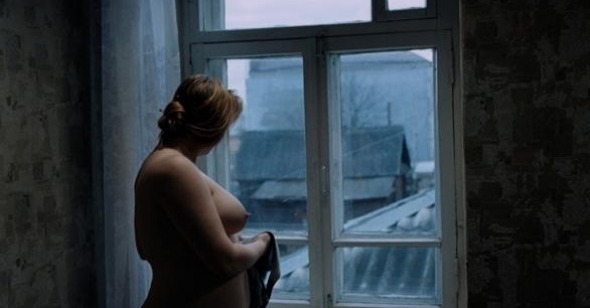 There‚Äôs a voiceover buzzing through Alexei Fedorchenko‚Äôs brief, impressionistic, and sentimental Silent Souls, and it‚Äôs eager to tell you how to absorb what you‚Äôre watching. The voice belongs to Aist, presumably a constructed cinematic alter ego of writer Aist Sergeyev, whose novel The Buntings provided the basis for the film. And there‚Äôs no denying the novelistic approach the film takes to its storytelling‚Äîit relies heavily on its narrator to inform the viewer of the significance of its environment and history. Fedorchenko seems to have been concerned that otherwise we might not be persuaded of the magic inherent in the traditions of the people at its center: the Meryans, a Finnish-Ugric tribe assimilated into Russia for hundreds of years who nevertheless maintained a spiritual connection to their ancestry through rituals and language. In this bleak drama of love after death, two contemporary Russian men of Meryan descent enact an ancient funereal rite of passage on a devoted wife. There‚Äôs an undeniable dramatic thrust to the tale, but the film is too impressed with its own elegiac minutiae, and so convinced that its audience will be awestruck by its characters‚Äô resolute adherence to a departed way of life, that it leaves viewers as little more than passive observers.

With its impressive (and self-impressed) camerawork by current feted star cinematographer Mikhail Krichman‚Äîwhose exacting, evocative photography on Andrei Zvyagintsev‚Äôs The Return convinced many that the film was something more than a hoary father-son parable‚Äîand mournful soundtrack of choral wails, Silent Souls all but begs to be called poetic; but it‚Äôs too precious and over-aestheticized to convince as art, and certainly too corny to allow comparisons to Tarkovsky, which has nevertheless not stopped some critics from doing just that. This is Fedorchenko‚Äôs third film, but first to play in the U.S., and it‚Äôs easy to see its appeal‚Äîas a hermetic exotic object. It borrows the vernacular of the contemporary art film (long takes, slow tracks and zooms, an ‚Äúuncompromising‚Äù fixation on ungainly naked flesh) but does so gingerly, without risking viewer alienation. For less adventurous festival-goers it‚Äôs the perfect antidote to this year‚Äôs other Russian breakout, the superlative, troubling My Joy; unlike that film, Silent Souls builds a microcosm that, although set today, circumvents contemporary Russian reality by paying tribute to a marginal past.

Set in central western Russia, on the Neya River, a tributary that is one of the Meryans‚Äô connections to its heritage, Silent Souls begins as Aist (misty-eyed Igor Sergeyev)‚Äîfortysomething, unmarried, a paper mill manager and poet‚Äôs son‚Äîis summoned by his friend Miron (Yuriy Ysurilo) to help take care of the body of his beloved, deceased wife, Tanya (Yuliya Aug, excellent at playing dead). This is no mere corpse disposal; rather it‚Äôs the beginning of a journey to return Tanya to a place of spiritual purity, to connect her with her forebears by not interring the body in contemporary fashion but following age-old Meryan tradition‚Äîshe will be burned on a pyre at the beach, her ashes tossed into the water along with Miron‚Äôs wedding ring.

A long sequence in Miron‚Äôs apartment of the two men scrubbing Tanya‚Äôs hefty nude form in preparation for the passage, her long hair unspooling at the top of the bed, the camera gradually tracking in and out as gray afternoon light spills in through the windows, announces the film‚Äôs aesthetic intentions fairly clearly‚Äîit also establishes the filmmakers and author‚Äôs odd relationship with the female body. As an entity onscreen, Tanya is either a flaccid, naked lump or, as a memory, a mute, sexual being‚Äîin one wistful reminiscence Miron pours an entire bottle of vodka over every inch of her generous disrobed flesh, in another she masturbates under her skirt for her husband‚Äôs viewing pleasure. Later, Miron shows Aist an encounter awkwardly captured on a palm-sized camera: she‚Äôs grabbing a staircase railing as Miron mounts her; we learn that this sort of sharing between men about a loved one who‚Äôs passed away but whose body is still on earth is called ‚Äúsmoke‚Äù‚Äîmore commonly known to us as bawdy bar talk. Full-frontal female nudity abounds, not only with Tanya (whose body is also used to demonstrate the Meryan ritual of tying colorful threads to a woman‚Äôs public hair at marriage and death), but also two quiescent girls the men pick up in a fruitless attempt at post-funeral sex.

Many will argue that the film‚Äôs sexism remains safely protected by the film‚Äôs nonjudgmental depction of Meryan tradition. After all, one of the many tiresome homilies we hear from Aist‚Äôs narrator during the course of the film is that ‚Äúa live woman‚Äôs body is also a river that carries grief away‚Ä¶ it‚Äôs a shame you can‚Äôt drown in it.‚Äù But Silent Souls has no interest in finding out who Tanya was, let alone critiquing or questioning the way of life it so enthusiastically dramatizes: it‚Äôs an oddly incurious portrait‚Äîan assemblage of symbols rather than people. (Fedorchenko seems more genuinely fascinated by the two buntings that flit around in a cage always by Aist‚Äôs side, next to the passenger seat like Tippi Hedren‚Äôs lovebirds‚Äîseemingly every other shot in this seventy-five minute film is trained on these feathered friends.) Silent Souls is ultimately about Aist‚Äôs loneliness, and his melancholy, stoic witnessing of a love he wishes he could have shared. After all, we are told that ‚Äúa Merjan doesn‚Äôt have God; we only have love for one another.‚Äù It‚Äôs a statement that makes Fedorchenko‚Äôs cold, omniscient approach seem all the more inappropriate; the only love on display in Silent Souls is in the film‚Äôs regard for itself.