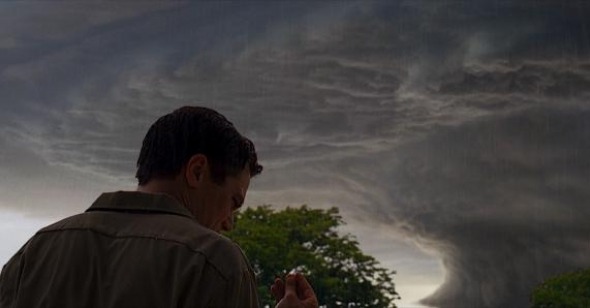 In Take Shelter, Jeff Nichols‚Äôs follow-up to his excellent 2007 drama Shotgun Stories, all the protagonist‚Äôs anxieties condense in the form of a storm cloud. Family man Curtis LaForche (Michael Shannon, playing crazy with a greater measure of stoicism than he has managed before) dreams of towering thunderheads and funnel clouds preparing to touch down. He gradually becomes convinced that a meteorological event, pitched between Katrina and something more biblical, is coming to wash out an indeterminate portion of the country, and perhaps the entire earth. (The film‚Äôs setting, Elyria, Ohio, is on the outer rim of tornado alley.)

The film, shot in boldly plain-looking digital video, but featuring streamlined digital effects, is centered around these nightmares. In the movie‚Äôs most stunning dream sequence, Curtis sees shadowy home invaders surrounding his home, while inside all of his living-room furniture suddenly gets sucked up into a an eerie zero-gravity float; Curtis clutches his daughter, Hannah (Tova Stewart), and his face shows the strain of the force acting upon the room. Still other dreams animate the fear of a threat originating from within: Curtis first imagines being attacked by his dog, Red; then by his coworker and best friend, Dewart (Shea Whigham); and later by his wife, Samantha (Jessica Chastain), who is in reality loving and supportive. These nightmares have a physical effect on Curtis (he has phantom pains, a bedwetting episode, and later wakes mid-seizure, bleeding from the mouth), giving them some semblance of a purchase on reality. His dreams, which he describes as also ‚Äúfeelings,‚ÄĚ come to dictate more and more of his waking actions, and his heightened paranoia (he‚Äôs unsettled by patterns, such as a flock of birds at his worksite that assumes an unnatural double-helix formation) eventually segues into full-on hallucinations.

Are these premonitions, or simply symptoms of schizophrenia? (The illness runs in the family: Curtis‚Äôs mother was institutionalized when he was ten years old.) Nichols keeps the answer just ambiguous enough that viewers will have something to argue about, and that Take Shelter can be interpreted broadly as an emotional state of the union, a film about the trickle-down damage done by the economic crisis and the recent fear-mongering of elected officials and the American news media (in one scene Curtis comments on a local-news broadcast). It‚Äôs impressive to watch Nichols keep all of this in the air for so long, even if his use of one honest, hardworking character‚Äôs potential mental illness as an element of suspense seems the slightest bit cheap. It also ultimately deflects attention away from the difficulties endured by the LaForches, otherwise dramatized with devastating exactness, their hopes for the future revealed through an uncommonly thorough snapshot of the family finances. The conclusion, at least, seems a good deal less uncertain than many critics have claimed.

Curtis prepares for doomsday chiefly by renovating and expanding the long-unused storm shelter in his backyard. At one point he tallies the cost of the improvements on a legal pad ($6,875), taking out a loan to finance them that his banker bluntly characterizes as ‚Äúrisky,‚ÄĚ and ill-advisedly borrowing heavy construction equipment from work to expedite the project. And the costs keep mounting: he walks into an Army-Navy surplus store to buy a family set of gas masks ($178 each for the cheapest kind) to keep in the shelter. The scene in which Curtis is forced to explain his building of it to Samantha is one of the film‚Äôs most moving‚ÄĒthe extended one-on-ones between Shannon and Chastain are similarly effective, with a superbly realized push-pull: he struggles to draw out of himself enough to admit precisely what‚Äôs wrong, she to gain control over her alarm at what she‚Äôs hearing. In trying to protect his family, Curtis winds up jeopardizing its very livelihood. While it relies on ambiguity elsewhere, the film never hedges about what‚Äôs at stake here. ‚ÄúYou‚Äôve got a good life, Curtis,‚ÄĚ Dewart says over some driveway tallboys early on, an intended compliment that hangs over the film like a warning.

Nichols is occasionally a bit ham-fisted as he establishes how tight money is for the LaForches, especially as they save up for their deaf daughter‚Äôs cochlear-implant surgery, while also trying to stash away cash for their annual beach vacation. An insurance worker tells Samantha that, believe it or not, her husband actually has a very good health-insurance policy, and then the film cuts directly to Curtis at the pharmacy, having a bit of co-pay sticker shock as he‚Äôs filling a prescription for mild sedatives to help him get through the night. Another cut takes us from a shot of Samantha at a sewing machine (in a later scene, she sells a pillow at a flea market for $8 in change) to Curtis at work, tending to a massive drill. More direct reminders of the family‚Äôs financial woes are better played when isolated within single scenes: ‚ÄúYou take your eye off the ball in this economy and you‚Äôre screwed,‚ÄĚ warns Curtis‚Äôs older brother, Kyle (Ray McKinnon).

But these few clunky edits jar largely because Nichols is otherwise so masterful with the smallest details, parsing them out in such a way that we come to know these characters organically, through the gradual accumulation of incomplete bits of information. In addition to a perceptive class-consciousness‚ÄĒsomething that also distinguished Shotgun Stories‚ÄĒNichols‚Äôs screenplay is remarkable for how it deploys the loaded aside, constructing an entire family history from tiny scraps of dialogue: at a Sunday brunch Samantha‚Äôs father chastises Curtis for not going to church; Curtis suddenly snaps at his brother for not having gone to visit their mother; Curtis also mentions only once, in a session with a counselor, his father‚Äôs recent passing. One crucial exchange between Curtis and Samantha in their daughter‚Äôs doorway (‚ÄúI still take off my boots so I won‚Äôt wake her up,‚ÄĚ says Curtis; ‚ÄúI still whisper,‚ÄĚ replies Samantha) suggests that Hannah has only recently lost her hearing, perhaps due to some accident‚ÄĒthis goes some way toward explaining why Curtis so often dreams of his daughter‚Äôs imperilment, while leaving the hearing-loss backstory open-ended enough that it never comes to seem the definitive catalyst to his madness. For his part, Shannon‚Äôs most finely tuned mannerism is the almost imperceptible flinch, as when a doctor tells him and Samantha that their daughter is scheduled to have surgery in six weeks. (What if the storm comes before then?)

‚ÄúNovelistic‚ÄĚ is a term usually applied to films that operate on a broader social canvas (and have a longer runtime, and perhaps a slightly more definite sense of purpose) than Take Shelter. But Nichols‚Äôs management of detail lends his film the density and texture of long-form realist fiction, with characters who seem to exist well beyond the margins of the frame. Though Take Shelter overreaches somewhat for cultural relevance, and though it suffers a bit in its overly orderly suspense-building representation of dreams and hallucinations (in other words, the parts furthest removed from the purview of realism), it nonetheless offers a sobering account of one working-class family‚Äôs tenuous grip on its comfortable domesticity. Most importantly, Take Shelter confirms what Shotgun Stories promised: that Nichols is fast becoming one of the deftest storytellers in American independent cinema.