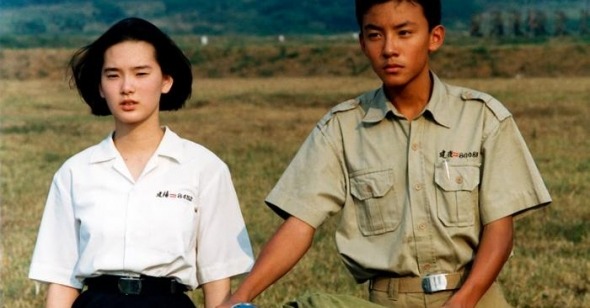 The Yin of Yang
By Andrew Chan

Those of us who get easily swept up in the tender, boundless empathy of Yi Yi may find it difficult to remember (or, due to the general lack of availability of Edward Yang‚Äôs other films, may not even realize) that much of this great Taiwanese director‚Äôs career sprang from his bitter sense of irony. While Yang‚Äôs final masterpiece suggested an artist beginning to make peace with an unjust world, his other major works were made in a spirit of indignant protest against a culture he felt was actively suppressing its own history and cheating its youth. Now that the World Cinema Foundation‚Äôs newly restored print of the 1991 epic A Brighter Summer Day is finally playing (at the Film Society of Lincoln Center), Yang fans will get a stronger dose of the anger that only occasionally disrupted Yi Yi‚Äôs chastened world-weariness and Ozu-like tranquility. Where Yi Yi was dominated by brightly lit compositions contrasted with a handful of melancholy nighttime sequences, A Brighter Summer Day traps its audience in a permanently murky atmosphere‚ÄĒone that seems intended to precisely capture the political anxiety of its historical moment, but that also renders our relationship to time and space unstable.

Nothing about the film‚Äôs premise leaves room for the lightness that Yi Yi endowed its ruminations on life and death. As if A Brighter Summer Day‚Äôs four-hour length weren‚Äôt intimidating enough to the uninitiated viewer, Yang makes sure to weigh his film down from the get-go, both formally and thematically. The unusually long Chinese title makes blunt reference to the first case of juvenile homicide tried in Taiwanese history, an event that galvanized the island and upon which the film‚Äôs central plot strand is based. The first shot metaphorizes Yang‚Äôs commitment to bringing a buried history into the light, with a single bulb hanging down the center of the screen, barely illuminating the darkness of an unidentified room. Soon after, a title card appears to situate the film‚Äôs sprawling, novelistic narrative and large, mostly early-adolescent ensemble within the context of the mass migration of mainland Chinese to Taiwan, which began after the Kuomintang‚Äôs defeat in 1949. By the Sixties, a generation of young people had emerged whose only sources of security were admission to a prestigious school or alliance with a street gang.

With its sovereignty as a state held at the mercy of its various colonizers (and long denied in both the East and West), Taiwan has always been a contestable and provisional nation. It is within this marginality that Yang locates the dilemmas of a contemporary Chinese identity, one that is both liberated and imprisoned by the globalization of culture. As in a number of other important Chinese-language films, such as Hou Hsiao-hsien‚Äôs City of Sadness and Jia Zhangke‚Äôs Unknown Pleasures, the shifting political landscape is communicated through bits of sound design, usually a fuzzy news broadcast placed incidental to the action. The implication is that the characters‚Äô sociopolitical fates are as tenuous as these barely audible sounds, which ironically must travel down the same channels as the imported pop culture that the nation fanatically consumes. Here, the first instance of government-controlled media being used as a narrative device is a roll call of honor and implied humiliation, as a radio announcer robotically recites the names of students whose exam scores have earned them entry into a good school. The obsession with education that has been forced upon this society‚ÄĒand the accompanying illusion of Taiwan as a meritocracy‚ÄĒforms the basis for tragedy ahead.

The young Xiao Si‚Äôr‚Äôs inability to secure access to a safe and successful future is what plunges the film into relentless nightfall. Attending evening classes at a school run by a tyrannical administration and a handful of young, powerful gangsters, our taciturn hero (the always remarkable Chang Chen, in his first film role) emerges as one of the most psychologically mysterious in the Yang canon. With nearly a hundred speaking roles among the cast, Yang populates the screen with a wide range of types: the adorable, innocent sidekick Cat, whose favorite pastime is transcribing and singing American pop music; Sly, a schoolyard tough against whom Xiao Si‚Äôr defends himself, thus earning demerits; the enigmatic, philosophical fugitive Honey; and Ming, the reluctant moll caught between rival gangs and the object of Xiao Si‚Äôr‚Äôs hopeless, jealous love. In contrast to these colorful figures, Xiao Si‚Äôr‚Äôs personality is often indistinct and his emotions illegible. Neither a valiant hero nor simply a victim, he exudes the extreme sensitivity of a Montgomery Clift, but is also quick to clam up and feign indifference. Since he mostly maintains the same stone-face through every injustice he suffers, each smile, extended bit of dialogue, or change in his tone of voice feels like a minor revelation. In this he often resembles Yi Yi‚Äôs NJ, had that middle-aged protagonist‚Äôs painfully introverted adolescence been inescapable.

All of Yang‚Äôs films from the Nineties onward are panoramic and polyphonic, designed to contain multitudes. What makes A Brighter Summer Day and Yi Yi twin miracles in his body of work is not only their ambition but also their impeccable construction‚ÄĒa quality that sets them apart from powerful but stylistically strained works like The Terrorizers and A Confucian Confusion. Where the ideas and characters in his lesser films can sometimes feel merely chaotic, A Brighter Summer Day and Yi Yi create an almost musical interplay between emptiness and abundance. The most obvious example is the arrangement of so many vibrant personalities and dramatic incidents around a central figure who would rather not act or speak. For Yang, though, Xiao Si‚Äôr and NJ‚Äôs speechlessness doesn‚Äôt turn them into clean slates upon which the problems of society are projected. Instead, their silence gives an almost tangible weight to language, and reminds us of the constant difficulty of choosing one‚Äôs words and actions in a world of arbitrary laws and outcomes.

Also remarkable is Yang‚Äôs acute sense of distance‚ÄĒof the spaces that open up all around us to separate people, generations, and cultures from one another. Scholars Emilie Yueh-Yu Yeh and Darrell William Davis characterize Yang‚Äôs visual style as a series of ‚Äútunnel visions,‚ÄĚ with the ‚Äúrecessional lines and staggered planes‚ÄĚ of doors, windows, hallways, and vestibules creating an inward distance within the frame, often drawing the viewer‚Äôs eye further toward an area of conflict. In A Brighter Summer Day‚Äôs most devastating recurring image, ‚Äútunnel vision‚ÄĚ accompanies the incommunicativeness of parent and child. Twice in the film Xiao Si‚Äôr and his father walk back from school with their bicycles, an image that bookends the tragic arc of the boy‚Äôs miseducation. On each occasion they have lost a crucial battle with the rigid school system, which seems intent on permanently labeling Xiao Si‚Äôr as a delinquent. Father tries to comfort son, then vice versa. One makes the false promise that hard work will secure a good life; the other vows to put heart and soul into his studies. But the two can barely look at each other as they walk toward the space beyond the camera, on the other side of the screen. The unbridgeable emotional distance between two people standing side by side echoes outward. Where Yi Yi affirmed the intuitive strength of the father-son bond, A Brighter Summer Day mourns the limits of what one can do for the other, even as they both travel similar trajectories.

There are many angles from which to appreciate a film as vast as this one. For some it may resonate as a Taiwanese Rebel Without a Cause or Godfather, an American-educated filmmaker‚Äôs tribute to the Western cinema he loved. Others will see it alongside City of Sadness as an era-defining attempt to break the taboos of the KMT‚Äôs martial rule. Comparisons to Yi Yi help bring the film‚Äôs achievements further into focus: both are built on the seamless interweaving of the rigors of art cinema and the instant pleasures of melodrama; and both contain some of the most astonishing, unaffected displays of child acting to be found in movies. But none of the above begins to suggest the delight of sinking into this film without any preconceptions, or the gratification of watching a masterful storyteller at the height of his powers.

Even in the midst of relentlessly tense drama, Yang is a sly, elegant jokester, and A Brighter Summer Day culminates in two puns, one in Chinese and one in English. The first will be difficult for a non-Chinese-speaking audience to detect: as the film draws to a close and Xiao Si‚Äôr meets his bitter fate, we see his name written and circled on a sheet of paper, the characters forming a face with downcast eyes, a pointy nose, and a toothy grimace. The second pun lies in the title itself: a humorous mistranscription of the phrase ‚Äúa bright summer day‚ÄĚ from Elvis Presley‚Äôs ‚ÄúAre You Lonesome Tonight?,‚ÄĚ which one of Xiao Si‚Äôr‚Äôs friends is learning to sing. While the Elvis song reminisces on some glorious past, history remains an unfathomable void for Yang‚Äôs characters, whose parents have spent their lives fleeing it. Unable to reclaim a ‚Äúbright‚ÄĚ past that never existed, they look to the better, brighter times that may or may not lie ahead.