Eccentricities of a Blonde Hair Girl 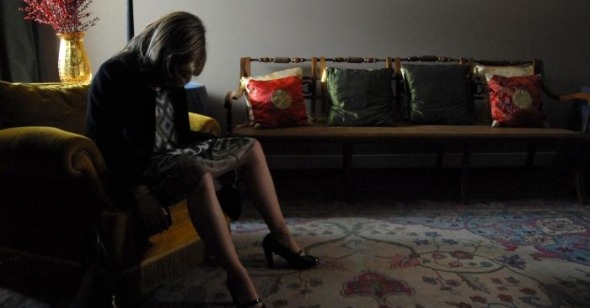 . . . In Small Packages
by Jeff Reichert

Manoel de Oliveira‚Äôs Eccentricities of a Blonde Hair Girl, huggable at 64 minutes, occupies the filmmaker‚Äôs by-now familiar nether-Lisbon, in which lives are lived simultaneously in 1609, 1909, and 2009. Oliveira‚Äôs a filmmaker at which the adjective urbane could be lobbed equally as praise or slight depending on your tolerance for his scarily coherent (especially of late) body of work. And there aren‚Äôt too many surprises to be found within the scant boundaries of Eccentricities, except of course those inherent in any Oliveira film: the depth of investigation (narrative and philosophical), range of references, steely control over aesthetics, and, yes, urbane sense of whimsy.

Eccentricities revolves around a simple story of love at first sight, but as in many Oliveira films that narrative is couched within a frame, presented at a remove (his Russian doll-like masterpiece Inquietude springs to mind). We first meet the despondent Mac√°rio (Ricardo Tr√™pa) on a train out of Lisbon, as revealed by the narrator, bursting to tell his story to the first stranger he meets. That stranger would be Oliveira regular Leonor Silveira, she of the mysterious, perpetual smile, and slightly askance blue eyes. She‚Äôs never named, and she‚Äôs only really there to make the framing device work‚Äîshe coaxes Mac√°rio‚Äôs story out of him, interjecting occasionally to bring us back to the present moment or goose things along when his resolve flags. It‚Äôs a highly literary strategy, but not uncommon for Oliveira who‚Äîalong with filmmakers like Rivette and Ru√≠z‚Äî seems intent on reinscribing a classical idea of Western culture through his cinema, in the face of the constant erosion of his ideal object.

After taking a position working as an accountant upstairs from his uncle‚Äôs fabric store, Mac√°rio spies in the window across from his office a beautiful blonde holding an intricately crafted fan. He‚Äôs instantly obsessed with the girl, Lu√≠sa (Catarina Wallenstein), and begins pursuing her at whatever opportunities are available: running downstairs to the shop after witnessing her and her mother stop by for material; using a friend to help him gain access to the salon of a wealthy host who entertains Lu√≠sa and other rich socialites (obsession in Oliveira‚Äôs films is ever a muted thing, spoken of more than seen, and even when witnessed always dependent on context‚Äîeven in his most heaving, amorous feature, Doomed Love, most of the actual passion is spoken of in the voiceover). Surprisingly, his courtship is well received, and in between a harp concerto and a poetry recital (as ever, Oliveira‚Äôs world seems utterly anachronistic), she‚Äôs leading Mac√°rio around the ornate residence by hand. The two become betrothed, even though the seeds of their love‚Äôs doom have already been sowed via a few carefully placed clues.

Mac√°rio tells his uncle of his plans to marry and is cast out onto the streets. From there he winds his way from poverty to wealth via a Cape Verdean business excursion of questionable nature, and back to poverty again, only to win back his uncle‚Äôs good graces at the height of his despair. Finally stable enough to provide for Lu√≠sa, and possessing his uncle‚Äôs blessing, he begins marital preparations, only to have the whole engagement crumble to pieces. [SPOILER ALERT] It turns out Lu√≠sa‚Äôs something of a kleptomaniac, and after being caught trying to steal an engagement ring, she‚Äôs left sobbing on the streets of Lisbon by her steaming fianc√© (when was the last time we‚Äôve seen contemporary Lisbon in an Oliveira film?). She returns home, collapses on a chair in the darkness and the film ends. Just like that. Earlier, Mac√°rio whines, ‚ÄúCommerce doesn‚Äôt favor a sentimental accountant.‚Äù After 64 minutes, we‚Äôve seen why.

If this tale weren‚Äôt so endearing and well told, it‚Äôd be more akin to one of those lengthy jokes told by aged uncles lacking in point or punchline. As it is, we‚Äôre carried through by Oliveira‚Äôs subtle, perfectly placed, but barely moving camera, often pointed directly into the wall seams of cramped rooms, subtly emphasizing the curvature of the lens and the cinematic vantage point from which we‚Äôre receiving Mac√°rio‚Äôs story. There‚Äôs nothing out of place here, even an impromptu dance number performed by our lothario meshes with the rest of the pleasingly stilted proceedings. It‚Äôs a testament to the malleability of Oliveira‚Äôs art‚Äîhe never makes anything but recognizably Oliveira films, but his alleged rigidity is far more wide open than it seems at first glance.