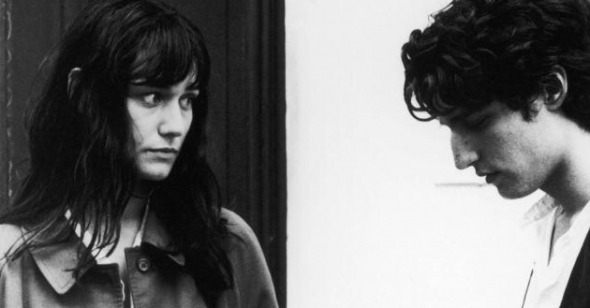 After the Revolution
By Nick Pinkerton

At a single 11 a.m. screening in 2005, the New York Film Festival presented Philippe Garrel‚Äôs monumental 178-minute hoard of period-specific emotional memory, Regular Lovers; it's miracle enough that the movie was made‚ÄĒbut now it's getting its American distribution? I don‚Äôt want to call Garrel‚Äôs movie Great (though, oh, it is)‚ÄĒthat‚Äôs one of those hefty words that tends to crush dialogue with the finality of its import, a disservice to a film that begs to be thought on, mixed-up with, bored or smothered by, but not put on a shelf labeled ‚ÄúMasterpiece‚ÄĚ to gather dust and dispassionate appreciation. I love and respect this movie far too much for deadening hyperbole‚ÄĒsuch a mass of celluloid deserves its fair chance to engage a living audience before our sect of art-house obscurists ceremonially put it in mothballs.

Garrel‚Äôs new film, like much of his work, has the stillborn French Revolution of May 1968 at its center, though the Events exist literally rather than symbolically here. Few critics will be equal to the challenge of discussing Regular Lovers without reference to Bernardo Bertolucci‚Äôs ‚Äė68-set 2004 film The Dreamers, and Garrel doesn‚Äôt ask us to; the connection is explicitly urged in a scene where actress Clotilde Hesme, discussing the Italian director‚Äôs Before the Revolution, turns to the camera to deliver a measured enunciation of the auteur‚Äôs name: ‚ÄúBer-to-lucci.‚ÄĚ

I can‚Äôt figure if Garrel‚Äôs movie is intended as an upbraiding counterpoint or staid intellectual sister film to The Dreamers‚ÄĒor even as some kind of disjointed sequel. It shares a leading man with Bertolucci‚Äôs insouciant work, Philippe‚Äôs son Louis, and as Garrel the younger steps off the streets of an uprisen Paris in an early scene, he tells friends, ‚ÄúSome guy gave me a molotov and all I had to do was throw it‚ÄĚ‚ÄĒthe same dilemma which ends Bertolucci‚Äôs film. But though Regular Lovers spends more time around the melee than The Dreamers did, it conversely seems the less invested film‚ÄĒBertolucci‚Äôs complicitly adolescent approach made a total coup (or anything!) seem possible; Garrel, filming at the sidelines, seems incapable of participating in the party for more than a few moments, burdened by full knowledge of the hangover ahead.

Regular Lovers (the connections between Garrel‚Äôs movies‚Äô titles and their texts is like that of New Order song titles to the songs‚ÄĒalmost only what we make of them) follows a free-floating cadre of young Parisians during the eruption and cool-off of '68-'69, their base of operations the palatial flat inherited by their friend Antoine (Julien Lucas)‚ÄĒsnazzier digs even than the posh apartment of The Dreamers. The movie is a massive, rather broke-backed work: the first hour is dominated by the long-shot chiaroscuro of police and students‚Äô pitched urban warfare during the Night of the Barricades‚ÄĒthe images, in some of the richest black-and-white photography in recent memory, recall Garrel‚Äôs works of Symbolist painterly myth-environment and medieval abjection from the early Seventies (The Inner Scar, The Bed of the Virgin). I‚Äôd found the reading of those films as allegories in political despair a bit tenuous, but the protestors‚Äô barren battleground is too close to the scorched landscapes of those early works, right down to the omnipresent jots of sourceless flame, to ignore a connection‚ÄĒit‚Äôs obvious those weeks of martial law left a deep imprint on the director‚Äôs hypersensitive imagistic imagination.

The remainder of Regular Lovers is the sort of intent, ascetic relationship study that‚Äôs characterized the director‚Äôs films of the last 25 years. As such, Regular Lovers is the perfect primer to Garrel‚Äôs body of work‚ÄĒa summation of sorts, and if you‚Äôre not engaged on some level by this outsized chef d‚Äôoeuvre, you‚Äôd probably do well to stay away from the sketches. At the movie‚Äôs foreground is Francois (Louis Garrel), a poet of uncertain accomplishment who‚Äôs 20 in ‚Äô68, as the director was‚ÄĒand Louis has inherited his father‚Äôs deferential but concentrated screen presence, monumental, unruly-looking head, and chin-down stare. Francois meets Lilie (Hesme), a young sculptress from a proletariat background (the movie has a muted genius when handling class), and the two lithe androgynes‚ÄĒlovely, pretentious twin sylphs in the Patti Smith/ Robert Mapplethorpe mold‚ÄĒwrap together in a cloistered love affair. Garrel‚Äôs romances are concentrated, self-absorbed things, their dynamic determined in large part by the director‚Äôs penchant for steadily fixing his camera, at close range, on his actresses. There‚Äôs something wonderful about the desire to look and learn that Garrel‚Äôs patient fascination exhibits; he‚Äôs an obsessive, affectionate watcher‚ÄĒbut maybe Bertolucci has a responding riposte ready-made for Garrel with the scopophiliac cuckolded cineaste played by Jean-Pierre Leaud in Last Tango in Paris‚Ä¶

A friend, who‚Äôd caught the beginning of Regular Lovers, hit me with a tough question when I professed my admiration: ‚ÄúSo did it ever go anywhere?‚ÄĚ I can‚Äôt answer in the affirmative, but if it lacks drive, Garrel‚Äôs big, busy canvas has a dreamy propulsion and compositional logic whose effect is additive rather than just anecdotal. His excrescence of little scenes doesn‚Äôt seek to overwhelm but, through accretion of detail, to work up an internal rhythm that can adapt and absorb a viewer who‚Äôs up to the task; the movie‚Äôs little formal quirks, like letting some shots run through a reel‚Äôs final, exposed frames, don‚Äôt even pry you out‚ÄĒthey occur as natural phenomenon, like passing clouds.

Yes, it can be a slightly stagnant movie, but this in no way diminishes the throat-clutching feeling when Francois explains to Lilie the simple contrast that proves his love for her is truer than those that preceded it: ‚ÄúI wasn‚Äôt listening to the girls I was with.‚ÄĚ Or the effect of the film‚Äôs most potent scene, which feels almost like an insert: a fey, dandy-ish secondary character in a tight-fitting velvet jacket moving across a dance floor, absorbed in his satyr-like frug to the Kinks‚Äô ‚ÄúThis Time Tomorrow.‚ÄĚ One could slough it off as a hip movie cliche, dusting off a handpicked piece of vintage wax, then shrewdly dropping the needle when a jolt of emotional import is called for (The Royal Tenenbaums set the bar with Nico‚Äôs ‚ÄúThese Days,‚ÄĚ and Squid and the Whale admirably performed the honors with Loudon Wainwright, ‚ÄúStreet Hassle,‚ÄĚ Pink Floyd‚Ä¶), but this moment of shivering synergy between mediums is larger than any record geek showoff‚ÄĒa lovely, ardently strummed tune about daydreams on a transatlantic flight is suddenly invested with the collective question of Regular Lovers‚Äô ridiculously beautiful youth: ‚ÄúThis time tomorrow/ Where will we be?‚Ä¶This time tomorrow/ What will we know?‚ÄĚ It‚Äôs Garrel‚Äôs capacity for moments like this, abrupt emotional levitations through music, which must‚Äôve prompted Olivier Assayas, equally keen in merging cinema and pop, to name a series of soundtrack-anchored films he curated at Brooklyn‚Äôs BAM Cinematek ‚ÄúI Can No Longer Hear the Guitar,‚ÄĚ after Garrel‚Äôs 1991 film of the same title.

But isolating standout moments isn‚Äôt fair to the way Regular Lovers actually works: I took reams of notes during the movie, but I‚Äôll be damned if I can remember the scenes or dialogues that most of them are in reference to. What really lingers is the impression of having been somewhere fragile, foolish, and lovely for the film‚Äôs three hours‚ÄĒamong a young generation solipsistically convinced of their significance and historical import: key is a pot-hazy drift-off dream in which Francois imagines his brothers-in-arms as a mob of Jacobins‚ÄĒdeposed militiamen in dirty tunics and scythe-wielding sans culottes‚ÄĒrolling an antique cannon through the streets. But in life, as in the dream, the rebellion breaks rank and scatters.

One might encapsulate Regular Lovers as fragments of an after-the-revolution comedown‚ÄĒone reviewer broke down the film‚Äôs formula as ‚Äúone third idealism, two thirds disillusionment‚ÄĚ‚ÄĒbut I don‚Äôt think that either-or polarity is quite equal to Garrel‚Äôs movie. You can detect an older man looking back dubiously towards youth‚Äôs utopianism and us-against-them ethos even at the height of the film‚Äôs rather languid fervor: the jabber between the movement‚Äôs leaders is a muddled mockery and a ‚Äúpig‚ÄĚ police inspector who visits the kid‚Äôs house turns out to be a benevolently paternal art lover.

There‚Äôs room for more than one disappointment: after the coup has dissipated, Francois replaces his wide utopian ideal with a narrower but no less grandiose one, the Egalitarian Love-In at the End of History is replaced by Love Everlasting. Francois‚Äôs verse hints at a long acquaintance with melancholy (‚Äúthe terrible roar of nothingness‚ÄĚ), and he pushes a slender pistol to his temple in a gesture of practiced poetic despair, but he has full faith in redemption through one absolute or Another‚ÄĒso he keeps pressing Lilie to promise him eternity, which she does, though with ambiguous eyes. A crash is as good as inevitable, and the film‚Äôs fall-off ending only increases Regular Lovers‚Äô passing resemblance to Robert Bresson‚Äôs litany of disappointments, The Devil, Probably (1977). But I think that Garrel‚Äôs film, better than Bresson‚Äôs, may deserve the unusual praise offered by Francois Truffaut after seeing Devil; for him it was the beauty of that film‚Äôs leads that ‚Äúanimate the film‚Ä¶and I am insisting on their beauty because it is in part the subject of the film: wasted beauty, wasted youth.‚ÄĚ Regular Lovers is a sad, admiring movie about love at 20, basking in the flare of the impossible potential pompous kids can find in the world, and the loveliness of that impossibility.