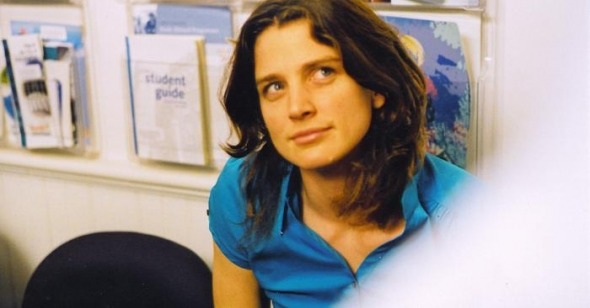 The Valley of Indecision
by Michael Koresky

Over-under-articulators might be the best way to describe the characters in the films of Andrew Bujalski. This of course is also a fairly apt encapsulation of the performance approach in many of the entries in the dare-not-speak-its-name American indie movement that Bujalski unwittingly jumpstarted back in 2004 and that now includes Joe Swanberg, Aaron Katz, Lynn Shelton, and various others as its unofficial members. Yet it‚Äôs only fair to judge Bujalski‚Äôs work apart from this semi-collective, since when 2002‚Äôs word-of-mouther Funny Ha Ha first started making its way around people‚Äôs VCRs and DVD players (long before its limited theatrical run in 2005), buoyed by the acclaim of supporters like Amy Taubin and, natch, Ray Carney, it came across as spontaneous and fresh, a relatable, minor-key peek at post-collegiate aimlessness that was able to successfully aestheticize that sense of drifting through both shooting and performance style. It‚Äôs the latter, however, that continues to most glaringly define Bujalski‚Äôs work and which makes him, for better or worse, a true auteur: if there‚Äôs any sense of uniformity across the three films in his oeuvre thus far‚ÄĒFunny Ha Ha, Mutual Appreciation, and now Beeswax‚ÄĒit‚Äôs that he somehow manages to direct all his nonprofessional actors to the same hyper-dull communication level.

It certainly takes precision to get everyone to deliver his or her lines in a similarly introverted, halting, self-doubting manner. Yet despite the few steps forward represented by Beeswax (a slightly more expressive mise-en-sc√®ne, increasing generosity towards characters), with this film it‚Äôs become ever clearer that Bujalski‚Äôs amateur players are unable to approximate convincing interaction and that one needs actual actors to pull off such naturalism in such contained spaces and with such close-up character-driven drama. The vicissitudes of human behavior that Bujalski focuses on are difficult to recreate on screen by those with little experience; the result is that more often than not his actors seem more afraid of the camera than of each other. Of course there have been exceptions to the rule, or at least those performers who have used that instability and unvarnished style to their, and Bujalski‚Äôs, advantage, such as Kate Dollenmayer, likeably disenchanted and disengaged in Funny Ha Ha.

Likewise, for Beeswax, the director has found a pair of actresses‚ÄĒtwins Tilly and Maggie Hatcher‚ÄĒwhose nonprofessional backgrounds and clipped, dispassionate line deliveries work well enough within the film‚Äôs context, even if their incessant shruggery keeps much of the film on a low-functioning plane; Beeswax is mostly pitched at the dramatic level of a wading pool. Shot on Bujalski‚Äôs preferred format of 16mm film, Beeswax trades in the Boston and Brooklyn boroughs of Funny Ha Ha and Mutual Appreciation for the trendier environs of Austin, where sisters Jeannie and Lauren are going through the what-next motions of young adulthood. Further away from college than the protagonists of the prior two films, these women are trying to navigate the pressures of working life and relationship pitfalls, while, of course, negotiating their futures. Jeannie co-owns a vintage shop called Storyville; Lauren is unemployed and going on job interviews while trying to decide whether to travel to Africa to teach English. Jeannie‚Äôs head-butting with the mostly offscreen Amanda, her lazy business partner whose store management skills leave something to be desired, and her reignited love affair with dowdy Bujalski surrogate Merrill (Alex Karpovsky), make up nearly all of the film‚Äôs narrative thrust.

Of course, Bujalski‚Äôs fans aren‚Äôt showing up for the drama, so it‚Äôs the tiny blossoming relationships and awkward give-and-takes that should provide interest. Yet with the actors largely unable to persuasively interpret subtle interpersonal dynamics (they always seem distracted, like they‚Äôre not listening to each other‚ÄĒand not purposefully), it‚Äôs the even smaller details that gently impress: the naturalistic, humane, yet never pushy or objectifying focus Bujalski gives to the paraplegic Jeannie‚Äôs daily routines (one sequence shows the length of time it takes for her to simply make her way from her car to her wheelchair and into a caf√©); a casual, bucolic frolic between the sisters, taking photos of each other in a field. On occasion, the director‚Äôs approach to character really works‚ÄĒas in a tense confrontation between Merrill and the standoffish Amanda, which earns that patented Bujalski halting awkwardness‚ÄĒand it all seems to click into place; more often the conversational languor feels forced. But if we start to look at Bujalski‚Äôs films as proffering not necessarily a generational statement about Us, but ‚Äúmerely‚ÄĚ an authorial outlook, an expression of his own negating approach to interaction, then maybe his films will become, ironically, more understandable to us.