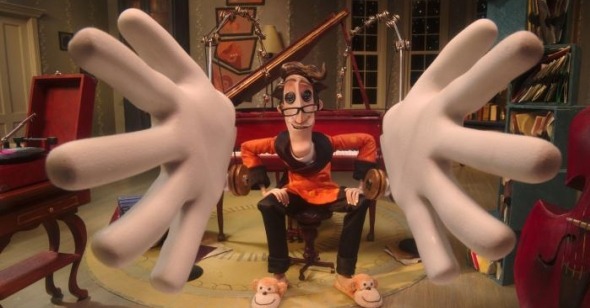 If the survival of theater-based movie viewing rests, as some argue, on the proliferation of more-cinema-than-cinema technologies like IMAX and 3-D, then we could do much worse than a landscape of features as painstakingly and winningly realized as Henry Selick’s stereoscopic 3-D puppet show, Coraline. Even though the shiny, new technological processes may be the main attraction, and they do in many instances provide that most rare of cinematic viewing experiences—the whiff of something totally new—in Selick’s film narrative, thankfully, nearly always comes first. After a virtuoso, if somewhat show-offy opening, the filmmaking settles down; where I expected to be reminded every several minutes of the 3-D-ness of the project via objects and characters constantly jutting out of the screen, Selick focuses instead on a play with spatial depth that’s more guarded, more intriguing, and more true to the cinematic medium.

The setup of Neil Gaiman’s source novel is so featherweight it ought to just blow away: young Coraline, relocated to a creepy new home feels generally ignored by her parents, and, left to her own lonely devices, discovers a doorway to an other-home where everything’s peachy—food and attention are plentiful, toys are magic, and her other-father has even planted their massive garden with magical flowers that add up to the shape of her face when viewed from above. This alternate universe proves initially seductive, but it isn’t long before sinister cracks appear in the facade created by her other-parents and Coraline finds herself at war with a very nasty creature. It’s Selick’s visual invention that brings this all to life—Coraline is overstuffed but not by the kind of gobbledy-gook dopplegangbang of the “live”-action Mirrormask or soggy psychologizing that undermined Robert Zemeckis’s otherwise kinetic Beowulf.

Selick’s prior features, The Nightmare Before Christmas and James and the Giant Peach, were both lovely and have become iconic, but (as with Tim Burton’s Corpse Bride) they still feel slight—made with puppets merely because they could be, rather than needed to be. It didn’t help that none of those films approached outlasting regulation length for a soccer match. What a difference 20 minutes makes: Coraline feels richer all-around, and I have a hunch that the additional length has as much to do with this sense of completeness as does the inventiveness of the visuals.

Even if the vocal performances (including Dakota Fanning, Teri Hatcher, John Hodgman, and Keith David) are often a tad perfunctory—save David’s slinky turn as a black cat—Selick’s always got something to marvel at: the world dissolving into blocks of cubist nothingness that recalls the bravura meta-finale of Don Hertzfeld’s Rejected; a terrifyingly bleak black-on-white web-abstraction; a lush play on Van Gogh’s "Starry Night." Imagine if Pan’s Labyrinth had been actually visually inventive, truly interested in the inner lives of children, and unburdened from the weight of needless and crass pretension, and you have Coraline. It’s usually at about this point in the review where one notes the “fun for all ages” and “not just for kids” aspects of the object in question; instead I’ll end by merely saying that Coraline never tries to be anything but what it is. In this case, that’s plenty.