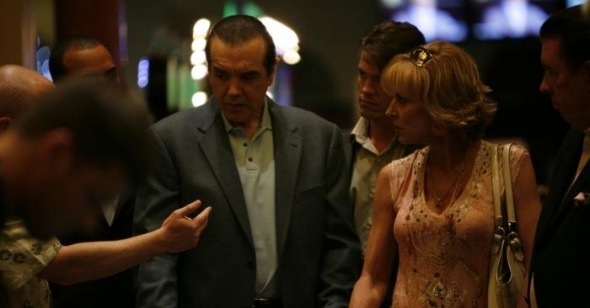 From the start, Yonkers Joe pitches the spectator directly into a world of tough-talking gamblers and sharks, where the dice are loaded, hands move quickly, and there‚Äôs always a scam in the offing. This milieu of casinos and parking lots, peopled with hustlers and hookers, is a familiar film setting, but one that‚Äôs produced remarkably few good films. Though the subject at hand seems ideally suited to cinema, allowing for a closer look at all the sleights and feints of card-sharp‚Äôs or crap-shooter‚Äôs trade, films such as Hard Eight, Shade, The Cooler, and this year‚Äôs 21 all mine similar material with a range of mostly disappointing results.

With Yonkers Joe, Robert Celestino means to invigorate a recognizable scenario‚ÄĒthe con man‚Äôs last big job‚ÄĒwith yet another workaday film genre: the family drama. The titular character, played by a slender and nonchalant Chazz Palminteri, is all business, casually cooking up and executing schemes in the banal world of Atlantic City gambling. But there‚Äôs also a Joe Jr., a twentysomething with Down Syndrome whom Joe pere has placed in a full-time care facility. Not the most attentive father imaginable, Yonkers Joe seems inclined to forget his son‚Äôs existence. But after beating up one of the home‚Äôs staff, the vociferously horny and obscenity-prone Joe Jr. is sent to live with his reluctant old man.

As played by Palminteri, an actor who‚Äôs watchable even in the most threadbare of contexts, Yonkers Joe makes it a business of concealing the fact that he has a lot on his mind. His passion for the perfect con is nonstop, and his perpetual scheme-hatching leaves him precious little mental energy for his girlfriend, Janice (played by the similarly likeable Christine Lahti), much less his estranged son‚Äôs erratic behavior. So, as Joe‚Äôs brain works through the convolutions of the Greatest Craps Scam of All Time, he also wrestles with his own conflicted feelings for Joe Jr.‚ÄĒisn‚Äôt there some irony in such a brainiac father having such a dim-witted son? Is the son‚Äôs Down Syndrome punishment for the father‚Äôs life of iniquity?

The generic conventions of gambling films and last-big-job movies alike dictate that a particular financial urgency must push the plan into motion. Here, Celestino once again splices the casino milieu with family drama: the big score will set Joe Jr. up in a new care facility for life, taking him off Yonkers Joe‚Äôs hands. With that motivation established, the rest of the film is as easy to predict as a roll of loaded dice, all of which is digestible enough, especially with the support of a cast of mostly strong character actors (including the great Michael Lerner).

Mostly strong, that is, with the major exception of Tom Guiry‚Äôs portrayal of Joe Jr. Painfully broad, Guiry practically sinks the film with garishly slack-jawed and over-the-top man-childishness. But this is not to fault Guiry alone. The actor‚Äôs difficult task isn‚Äôt made any easier with a script that requires him to tell people to ‚Äúeat a bowl of cocks,‚ÄĚ innocently simulate cunnilingus, and hoot ‚ÄúViva Las Vegas!‚ÄĚ It‚Äôs as if the film itself shares Yonkers Joe‚Äôs problem of what to do with his Down Syndrome child: should he be crazy and funny? Should he be sweet and touching? In the hands of a non‚ÄĒmentally challenged actor, the role simply comes off as a bad joke in an otherwise low-key and well-meaning film. Had the part been cast with an actor who actually had Down Syndrome, the gesture alone would certainly have earned for the film and its characters the kind of good will it seeks in the first place.